Yesterday? Yesterday was awesome. Careening along narrow mountain roads in a tippy tour bus while Antonio pointed out the window at the black-faced ibises and caracaras passing our windows, indulging us when we passed through a town that was having a fiesta (you want to get out? Okay – but only 15 minutes!).

As best as I can tell, being a gringo who can string together the phrase “May I take your picture?” is as good an ice breaker as you can imagine. Especially for kids – the kids just go nuts hamming it up. But also the grownups. That woman standing behind the guitar-toting teenagers – I asked them if I could take their pic, and she moved out of the frame. But they waved her back, as if having the three of them together was the whole point of the shot. I love that beaming, confident smile of hers.

A few more Antonio-may-we-stop opportunities later, we made it up to the Delgado ranch, nestled on the flank of 18k’+ Antisana volcano (the ranch is only a wimpy 13,000′ up). The Delgados apparently are the largest landholders in Ecuador, and administer something like a million acres of Ecuadorean highland as a nature preserve. The ranch house, or at least *this* ranch house was on a broad sweeping slope across the stream from a cabin where Alexander von Humbolt apparently did a lot of his Ecuadorean research. The pics over at http://picasaweb.google.com/david.cohn/20091220Quito give a feel for the ranch house, cabin and general landscape. They don’t give a feel for the sound Devon made as I almost slipped off the muddy little footbridge crossing the stream. Somewhere between “I’m going to kill you!” and “OMG – are you alright!??” 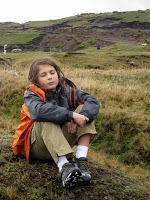 But we all made it to the Humbolt cabin mostly dry and had our little photo-op. Then back down the winding roads to Quito for dinner and a much-needed night’s sleep.

This morning. Uh.. the nice thing about growing up in Colorado is that altitude doesn’t faze you in the least. Unless you’ve been away from the mile-high state for over two decades. I woke up this morning wondering how someone had managed to sneak an anvil into my brain case. Surely it was just jet lag? But no, I spent the better part of today’s guided perambulation through Quito’s old town focusing on keeping the horizon roughly level (not a trivial task in Quito, even for the unafflicted), and stumbling along after our group. 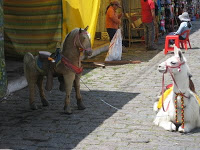 Presidential palace (more cheery schoolkids), churches (cheery priests), the equator line (cheery tourists). And me looking around all the time like a pole-axed donkey. I’m completely bonked. Probably shouldn’t be posting in this mental condition, should I?

How emasculating for a manly (former) mountain man like me! Done in by a mere 9k of city altitude. The good news is that we’re headed for sea level tomorrow morning, catching a flight to catch a flight to head out the the Galapagos. Sea level – on a boat. Will I match this indignity by also getting sea sick? Stay tuned.