Five thousand feet above the Nevada desert, it was hot as hell – even at ten in the morning. I wasn’t looking forward to the landing in Elko, where we were going to refuel, try to get a bit of food in the kids, then make the final two hour dash for home before it got really hot.

We’d left Jackson as early as we could, retracing our outbound route, but with a little more experience this time through. For one, we’d gotten ourselves down from the lake to Jackson proper the night before, 45 minutes closer to our departure airport of choice. So there was added departure convenience, but also, it was the Fourth of July, and there was rodeo, and fireworks to be had in town. Yes, Jackson is plastered and clogged with jet-setting tourist trade, but damned if they couldn’t still manage a downright respectable rodeo. 4th celebration.

Ceremonies kicked off in the fairgrounds as the sun was setting behind the buttes with “future princess” riders (WTF?) riding fast around grounds, waving like lil’ Annie Oakley. Then in came Old Glory and the state flag of Wyoming, followed by a military color guard and a benediction by the announcer. Plenty of non-sectarian and non-partisan (ahem) reference to how “Dear Father God, we pray in Jesus’ name for the health and wisdom of our leaders, even when they are misguided and mistaken, for we know that salvation comes only….”

I noticed that one of the hometown military boys being honored in the color guard was a Corporal Zach Shapiro. I found myself making some assumptions from his name, and wondering how many times a day he had to let this sort of thing slide.

Kids got their turn in the dirt too, with the… oh they had some name for it. Basic idea was that they got all the kids lined up and released two calves with ribbons tied to their tails. The two kids that got the ribbons got, uh, I dunno. Kicked by a calf? No, free tickets to next rodeo, I think. Something like that.

But it was fun, really. 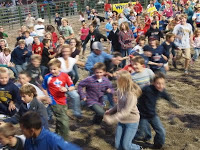 Then as it got dark, we walked a few blocks to the base of Snow King Mountain, and got the most up-close and personal fireworks display I think I’ve ever seen. Launch racks couldn’t have been more than a couple hundred yards away, and we kept craning our necks back as stuff went straight over our heads. Enormous, loud, bright, colorful barrage that went on and on and on. Close enough that we all got ash in our eyes and left, at the end of it all, with our ears ringing. 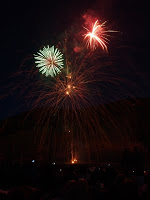 The walk back was as you’d expect – throngs spilling out into the street. Howling drunks, angry drunks, mounted police trying their best to just keep people moving along. Daniel had joined us for the fireworks (note: texting an Australian that you’re camped for fireworks “in ball field near 2nd base” is an unfair test of international sports aptitude), and somewhere along the swirl we collided with other friends of his who were headed out for more young-people-without-kids entertainment. We peeled off and headed back for the hotel. Next morning was going to be a long, hot day.

One response to “Hotter Than the Fourth of July”