“You could leave life right now. Let that determine what you do and say and think.” -Marcus Aurelius, Meditations, Book 2

I lost another friend this week. Yesterday I got to spend the afternoon with friends and family, walking her to the gravesite, listening to stories about the uncountable ways she’d changed everybody’s lives. Heard her co-workers tell how she’d helped them find their way. Watched her 16 year old son and his friends talk about how she’d made their home the center of a community where everyone could come to feel loved and safe and valued.

I’ve known Sara since as long as I can remember (she was my big sister’s best friend growing up), but didn’t know her nearly well enough. Her life seems to have been this immense tree that spread out and out in all directions, and all I ever saw was this one small branch that gave me shade.

She came to some of our musicmaking parties, but mostly we just passed in the halls at Google and said “hi”. I do like to take credit for getting her to join way back in 2003, even though we never got to work together. The thing was that, when we did cross paths every week or two in our respective rush from one meeting to another, she would stop to smile and say hi. I mean really stop and say it. Amid the stupid rush of Silicon Valley craziness, she stopped, smiled and said hi with this beautiful intense, well, presence. Not the “presence” we talk about when describing rock stars or hotshot politicians – I mean the presence of Being Here Now. Her smile said, “Isn’t it amazing that, in this immense crazy awful wonderful world, that I get to be here, right now? And even better, that I get to see you here, too? Who would have imagined?” There was a joy in that smile, such an appreciation that it could make you forget that you were rushing off to some useless meeting to explain why you hadn’t been able to deliver the thing that you said you wouldn’t be able to deliver when you were told you had to. There was a joy in that smile that made you remember that we were all here, now, and that being here and now was maybe the most important thing we could be doing with our lives.

I’d heard, roundabout, last summer that her cancer had come back, spread. But it wasn’t the sort of thing you asked about, was it? And still, every day, there was Sara, smiling, being there, and reminding us that we too could be there.

I only saw her once or twice after I left Google; once in a parking lot where my car had broken down (she stopped and helped me debug – and fix – the problem). We exchanged occasional email: she hoped to make it to the next musicmaking “if I’m feeling well enough” and encouraged a friend to come join us, regardless.

I kept hearing through the grapevine about how she was struggling, trying not to let her suffering become a burden for friends. How little time she was told she had left, and how she still managed to use it to live as an example for others. How even in the midst of hospice, she rehearsed for the piano recital no one imagined she’d have the strength to give. And she gave it, of course, with her sister Susan, husband Dave and son Stephen – those who made it possible – at her side.

The last time I heard from her – okay, this is going to sound stupid – was just two weeks ago. I was updating the mailing list for our musicmaking announcements – the list had grown to about 300 people, many of whom had moved away and many of whom probably only were on the list because they didn’t want to hurt my feelings when I offered. So I set up a new list with an “opt-in” and blitzed out to everyone on the old one: let me know if you’d like to keep receiving our monthly announcements.

Her reply was short, and even then nearly brought me to tears: “I know it’s been ages since I’ve come, but I would like to stay on the list. Could we use my gmail address though?”

It was Tuesday, three days ago, that I got the email telling me she was gone. Small funeral up on Skyline, with memorial service to follow at their congregation. My sister and mother flew in, and we walked together in the long quiet procession behind the hearse. Paused seven times along the way, as is Jewish tradition, then the eighth time, the final stop at graveside, and recited Kaddish as they lowered her down.

Forgive me – this isn’t supposed to be about me. It’s supposed to be about her, and making things better for those who were closest to her. But I’m doing what I can here. What I want to say is that I’ve lost plenty of friends and relatives in the past dozen years, usually via email from half a world away saying they were gone, and that there would be a private ceremony. I like to think I handle loss pretty well. But I don’t know when I last did this, last performed the mitzvah, the obligation of accompanying a friend to the grave. And it came close to overwhelming me.

As we walked, I kept looking at the hearse, at the simple polished wooden casket. I kept thinking: “How can that be Sara in there?” Sure, I suppose the dimensions were right, but the Sara I knew wouldn’t fit in a box. Any box. The Sara I knew was always in motion.  The Sara I knew moved with such intention and will that the earth would concede any point she cared to press. The Sara I knew could melt through a mountain of ice with her smile and make it bloom wildflowers in February. How could she be in that box there? It just didn’t make sense.

Of course, in so many ways, that wasn’t Sara in there. Sara was gone – she wasn’t anywhere. And at the same time, standing there, listening to friend after friend tell how she had changed their life, given them inspiration, helped them find their way, it was clear that she was everywhere. In the hearts and memories of the lives she had touched.

In Judaism, when one invokes the name of someone who has died, it is customary to add “Zichrona L’Vracha,” – may her memory be a blessing. With Sara, this seems so superfluous – she already is a blessing. She always has been. 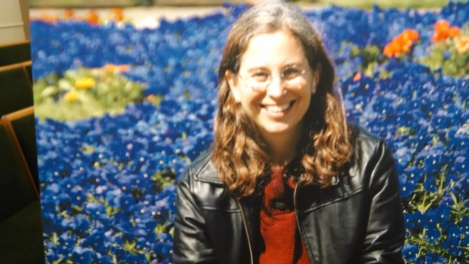