I misread the faint glow on the display of my clock this morning, and found myself awake and dressed at 5:45. Not that I was surprised – as tired as I was last night, my dreams were colored by the knowledge that we were setting sail, eastbound through the Straits of Magellan some time after midnight. I climbed the four flights of stairs to the darkened bridge and asked if it was okay to “come aboard”.

The bridge is seven stories above waterline and larger than most houses in my neighborhood; the closest thing I have to compare to it is the bridge of the Starship Enterprise, manifest in nautical steel and inch-thick glass. Captain’s policy is that it’s always okay to visit the bridge unless the “no entry” light is illuminated, but the humming quiet of that immense, imposing space festooned with what seems like half a football field of levers, buttons and blinky displays gives me pause.

A voice beckons from the darkness; Chris Peterson, the NBP’s Chief Mate is on duty, and he sounds glad to have company. We know Chris has years of experience – you don’t get to be Chief Mate on a ship like the NBP without it – but it’s hard to shake the impression that he’s not much older than my kids.

We talk about Shackleton, Worsley, and the voyage of the James Caird while peering out to the indistinct horizon. The depth of his stories, and the voice of experience with which he delivers them suggest that he really is a lot older than his youthful appearance suggests.

Chris is driving the ship under the direction of the Chilean harbor pilot reclining in the captain’s chair. Actually, he’s driving the computer that drives the ship. From time to time, the harbor pilot sagely offers a heading. “Now, 75 degrees”; Chris plugs it in without a pause in the story he’s telling, and 15 million pounds of steel and diesel slowly heel to starboard below us.

The gentle pitching and rocking of the lower decks is much more pronounced up here, and conversation shifts to the immensity of the ocean, and the urge for long voyages. Words trail off and we let our gazes drift to where traces of land still crowd us on either side; it’s become much lighter out now, and I realize that I’m due down in the ELab soon. I thank Chris for the company as the harbor pilot calls out another heading, then I spiral down the five flights of stairs to the galley on main deck.

I’d told the sciencefolk that I expected to be at my station at 8 a.m., and they take me at my word; there are half a dozen laptops to scan, mailing lists to be fixed and machines to be rebooted and printers to be fixed. I feel subtle shifts in the way the ship is rolling and somehow know we’re in open water. I want to go above, want to break away for a minute or two to celebrate the real start of the southward passage, but there’s simply too much to do. And now one of the electronics techs has replaced a fluorimeter in the data array, and I need to figure out how to get the new calibration figures into the data aquisition system (the DAS); I’ve got documentation on how to start the pipeline, but we did that already; do I need to stop and restart it?

Sean’s had a rough night, so I’m on my own here, trying to be cheerful with mundane requests while stifling growing panic about the data pipeline. Kathleen’s words back in Punta Arenas come to me: the success of the cruise doesn’t depend on whether the grantees ever get their email or Facebook; it depends on whether the DAS is running. But there’s time – we don’t get to flip the switch and start acquiring live oceanic data until we’re clear in international waters (certain governments apparently would prefer that we not scan the seafloor of their coasts). Which gives me…about two hours to figure it out.

Fortunately, Sean comes up for air in time to dispel my panic and show me the restart process; it’s pretty intuitive and my confidence is buoyed by the thought that, if I had had to wing it, I would have gotten it right. And I haven’t even missed lunch (though just barely).

It’s now broad daylight, a little after noon, and I’m completely wiped. With Sean at the helm in the lab, I retreat upstairs, first to the bridge, then higher, to the ice tower, three narrow, enclosed ladders further up.

The ice tower is the high point of the vessel, an enclosed sort of crow’s nest from which the ship is guided when breaking ice. It’s a small room, generally unoccupied, about the size of a king bed, bristling with antennas and surrounded by glass. Sitting there, you can feel (quite reasonably, at 10 stories above the waterline) like you’re in another world. No, it’s not for those with fear of heights or tight spaces, but I find it wonderfully comforting; I’m hoping, once things quiet down, to find excuses to bring my guitar during off hours.

We’re now in open ocean and there, above the world, looking out on the unimaginable expanse, I feel my breath change. The ship’s rocking is a lullaby, and I find myself fighting, then giving into the sensation that I’m riding an enormous horse, galloping in slow motion, the way one can only do in dreams. I feel like I could lose myself here forever. I feel incredibly small and insignificant. And, inexplicably, I feel and immense comfort in that insignificance.

I don’t know how much time I’ve let slip by in this reverie, but I feel like a new man when I make my way back down the ladders. It’s been a hard morning, but I handled it, and I handled it (mostly) by myself. I’m ready for the rest of the day.

First thing I notice when I make it back to my seat is a stack of auto alerts from the mail transfer jobs: unable to establish connect for 30 minutes. Sean’s nowhere to be found, and the console screen is filled with complaints; signals lost, fatal errors and red lights blinking on the sat connection monitor, and the fleet broadband handset is bleating loudly that it’s unable to sync the firmware in its antenna. None of the ship’s core systems can connect – we’re offline.

Some of you may remember how, way back when I was offered this job, I said my greatest fear was not that the ship would sink, or that we’d get trapped in the ice, or any of those horrors that confronted early explorers. It was the fear that the stuff – the ship’s information infrastructure – would break and I, the putative systems and network admin, would have no clue how to fix it. It was a frighteningly believable manifestation of those nightmares in which you show up for your Algebra final, and you don’t remember ever having actually taken the class. That fear had crawled into my dreams at night and haunted me even during the day, whenever I found myself baffled by some ostensibly simple problem with my own laptop. And here, in the open ocean for the first time, it had blossomed into reality.

I found Barry, one of our two Electronics Techs, and he helped my trace the primary fault back to the satcom modem, tucked under a power supply in the back of an overstuffed rack of telecom equipment.

“When I was working the Gould (the USAP’s other ship), sometimes I just had to turn the modem off and on again. It’s a modem; they’re like that.”

We cycle the power, and one row of red lights disappear. The FBB monitor shows that we’ve regained signal – we’re up? And then it’s gone again, and the modem lights go red: fatal error connecting to antenna.

Chris pops around the corner and reminds me that I’d promised to scan his laptop, and Sheldon observes that we’re approaching 68 degrees west, when we need to flip the switch to go live on data collection. I feel something like the pressure of an invisible vise clamped around my temples, each moment, squeaking just another fraction of a turn tighter. I venture a guess on how many more turns I’ve got before my head explodes.

Carla peers in from the Wet Lab. “Pablo – do you have a… oh. Never mind, I’ll come back later.” I guess I’m not hiding my sense of panic that well.

I’m starting to consider curling up in a ball under my desk as a reasonable contingency plan when Sean reappears. He’d only been gone for 20 minutes, setting up a load of laundry, but in that time, I’ve gone from calm, cool and collected to useless and out of ideas.

He looks at the console monitor and pokes at a couple of keys. “Oh. That’s not good.”

We reboot the modem again, and it comes up for a few minutes, then fails to sync the firmware in its antenna and dies in the now-familiar fit of bleating. Sean has been working this ship for three years and knows its systems inside out; I’ve quickly learned to gauge the seriousness of any situation by the particular choice of curse words he mutters while debugging, and I can tell that his initial assessment of “That’s not good” was a supreme understatement. 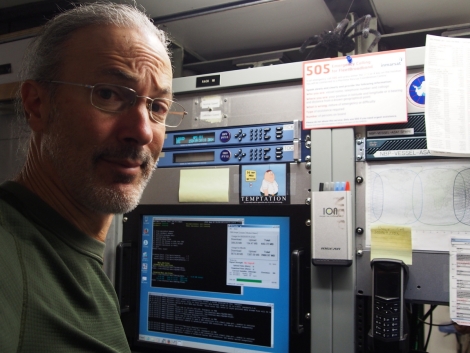 I’ll spare you the details of the rest of the day, mostly because I don’t understand half of what we (mostly Sean) did to fix the problem. It involved digging through the equipment room in search of a spare satcom modem and a few calls on the handheld sat phone back to headquarters before we located a (theoretically) compatible unit in a spare rack on the bridge. It involved lots reaching through inaccessible spaces to remove and reattach nuts and bolts we couldn’t actually see, hauling things up and down six flights of steps in the now-noticeably rolling ship. It involved incompatible configuration files and cryptic “import failed” messages. It involved more calls on the handheld to the manufacturer of the equipment and the discovery that, in order to get ourselves back online, we had to download 50 Mb or so of Java updates from the Oracle website. And, understandably, it involved a lot of words that are not fit to print on a blog intended for readership by the general public.

By 7:30, Sean had the problem as figured out as we were going to get it. The new modem was jury-rigged into place and not crapping out more than once every hour or so. The unprintable invectives had mostly subsided and the internet was as up as it was going to be. Which was mostly. We’d even had time to slip out to catch the end of dinner.

Sean leaned back in his chair and pursed his lips, trying to find a tactful way to ask a question that had apparently been on his mind.

“So… is this what you imagined it would be like working on a ship?”

Yeah. Hard as it might be to understand, this is exactly what I thought it was going to be like.

[note: we’re having bandwidth issues, so I’ve not had the chance to check gmail for a while. If you want to reach me, feel free to drop a line to david.cohn.contractor@nbp.usap.gov; that ought to be a much more reliable line]