A hundred miles north of the King George Island on our homeward run there’s no question that we’re back in the Drake. The deck is pitching enough to make walking anywhere a somewhat statistical matter, and anything that could roll, tip or slide when it really gets rough is already battened down. Even so, the ship is alive with sound and motion: office chairs squeak and spin in slow unison, as dangling coats and cables sway to the rhythm. Cabinets creak with every change, and the forward corridor on main deck whistles hauntingly with a wind from somewhere whenever the starboard slips into a trough.

Of course, “rough” is relative. Seas right now are around 2 meters, with winds gusting around 25 knots. Last year’s AMLR Tilt-a-Whirl, I think, saw stuff more than twice that. But I’m not taking any chances: having learned my lesson about not getting on the back side of the nausea curve, I started my meds early, and am going to keep on them until we’re snug back along the coast of Tierra del Fuego.

Meanwhile, life aboard continues. With no impending krill tows, the zoolab folks have retired from their microscopes in favor of a midnight movie up in the 02 Lounge. The darts tournament never made it past the first round, but apparently a rampaging cribbage tourney has sprung up in its place. And a small but ardent community of T25 acolytes have been baptized.

Yeah, I don’t think I’ve mentioned T25 before, have I? It’s a series of exercise videos, 25 minutes each, led by Shawn T and his supporting cast of sweaty hardbodies. There’s a calendar, and each day in the week has a theme: Speed 3.0, Ripped, Extreme Circuit and the like. It’s become sort of a thing, I guess, here on the ship.

I remember years ago, long before I had any actual notion of life at the South Pole, hearing about some winterovers who began obsessing over a VHS movie they had. Catch phrases and increasingly-trivial memes from the film entered the station vernacular to the point where, when the first plane made it down to crack things open in spring, none of the newcomers could understand a word the winterovers were saying: the Polies had developed an almost complete language and culture born from the minutiae of their well-worn tape.

I can understand that now. I mean, we’ve got internet and regular phone calls home, and we’ve only been on the ship for three weeks. But we’re already at the point where people will enter the mess, stare down fellow T25’ers and say (in Shawn T’s over-pumped opening voice) “This is midrats 25. Your focus begins (3..2..1..) now.” Add things like science fish, and scratch and sniff biographies, and no one from the outside would have any idea what half of us are talking about over lunch.

Of course, actually *doing* the workouts in these conditions is a study in compromises. Those single leg deadlifts, balancing on one foot? Good luck. Even jumping jacks are futile when the floor never in the same place you left it on the way up. But it’s a good excuse to get out of bed, and – for indoor house pets like me – it gets the blood running. Then again, in these conditions, so does simply making it across the deck… 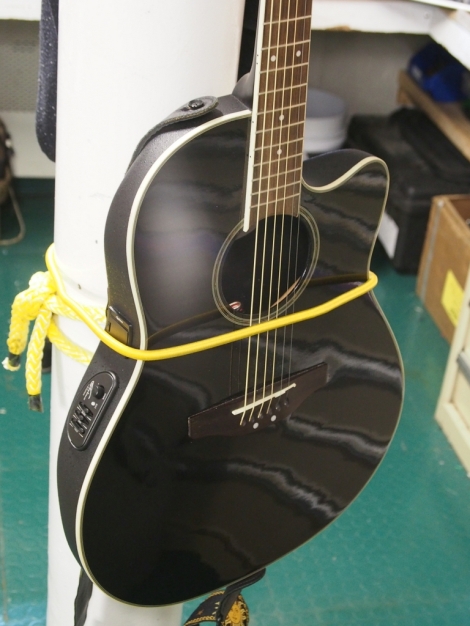 One response to “Once More Into the Breach”