One of my favorite new words of the past few years is “sonder,” coined by the Dictionary of Obscure Sorrows. The definition, which I hope you will forgive me for including in whole, is

(n) The realization that each random passerby is living a life as vivid and complex as your own—populated with their own ambitions, friends, routines, worries and inherited craziness—an epic story that continues invisibly around you like an anthill sprawling deep underground, with elaborate passageways to thousands of other lives that you’ll never know existed, in which you might appear only once, as an extra sipping coffee in the background, as a blur of traffic passing on the highway, as a lighted window at dusk.

It goes a long way toward helping me understand that debilitating fatigue I feel after a couple of days in a big city. Well, take that fatigue and multiply it by a few thousand if you’re going to drop me somewhere like Elmina, Cape Coast, or Accra. It’s not the physical mass of humanity that feels so crushing, it’s that there are so unimaginably many lives, so many stories going on so close to you. It feels like a thousand people shouting all at once, each wanting your attention. This, I can handle for about 15 minutes, and I’ve just come off a couple of days of it.

Mind you, there was some quiet time in there, making our way along the canopy walkways of Kakum, and solitary evening strolls along the wave-torn beach in Elmina. But for the most part, these past few days has felt like one overheated crush of humanity followed by another, interrupted by jostling rides down broken dirt roads to get between them. Does it sound like I’m done with this trip? Yeah, sorry, both D and I are feeling kinda done.

I mean, we’ve gotten to see some pretty eye-opening places, spanning the upper limits of inspiring and and plumbing sobering depths. The Slave Castle at Cape Coast, where over four million men, women and children were chained, broken in a dungeon, then shipped off as slaves to the New World, never again to touch native soil. And two hundred years later, rusted cannons and the sound of children playing on the steps. 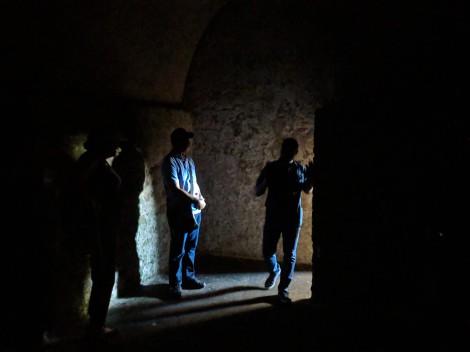 We’re back in Accra from our coastal excursion, spending more time with Ashesi trustees and board members. There’s a dinner tonight celebrating the (long overdue) granting of the University’s charter as a fully independent institution, and then tomorrow D and I head to the airport. Devon will be going directly home, but I’ve got a couple more destinations in store before I get back to Pacific Standard Time: first Woods Hole for a conference where I’m going to be presenting the system I’ve been working on this past year, then driving a couple hours west to go harass our eldest at Hampshire for a couple of days. Then, finally, a week and a half from now, inshallah, home.

In the meantime, some pictures from the past couple of days: 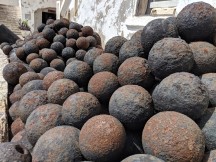 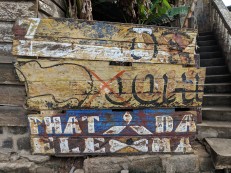 One response to “Overload”