It’s come up a few times that I’m spending the week as a single dad, putting Andy through her paces while Devon and Jem are out of town.

“They’ve gone to Panama for a week, where they’ll be hanging out in the rainforest with folks who are staging the first-ever descent of the Rio Mamoni by kayak.”

“Okay, that makes perfect sense – except for the part where they’ve gone to Panama.”

No, really. It started about a year ago, when brother-in-law Colin caught up with a fellow named Nathan Gray. Nathan’s a co-founder of Oxfam America, and lately has been spending time in Panama, among the tribes of the Kuna nation, who live in the Darien region east of Panama City. 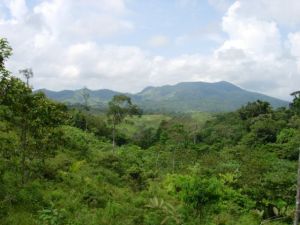 The Kuna have watched other indigenous peoples get taken badly when dealing with the relentless approach of “civilization.” They occupy a large percentage of the native rainforest at the narrowest portion of the meso-american land bridge, and have a vested interest in making sure it doesn’t get bulldozed or bartered away for pretty beads. They’ve enlisted Nathan, and his latest venture, Earth Train, to help them develop the socio-political-legal-techological chops to preserve their land and let them benefit from controlling its future use and development.

Last week, Nathan met with the tribal chiefs at Earth Train’s “headquarters” up in the hills, and helped them work out what resources they needed to muster. They want to figure out what parts of the property are most important for ecological continuity and which can be leased out for development. Photo here shows Nathan and the chiefs surveying Kuna land on Google Earth, powered by microhydroelectric and connected by a satellite uplink. 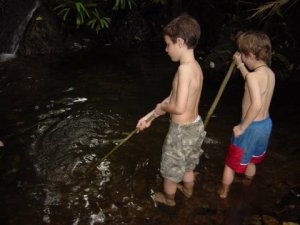 Anyhow. Nathan’s also exploring Kuna-run eco-tourism. As a test run, he’s invited a few friends, supporters, and travel writers to participate in an experiment: kayaking the Mamoni River through Kuna land, from continental divide to coast. Being Panama, the trip is only about35 miles, but apparently, the river’s never been navigated end-to-end, and Colin and family were invited along for the expedition. Colin’s wife and kids (a.k.a. “the boy cousins”) wouldn’t be kayaking, but would spend the week poking around, swimming in waterfall-fed pools, chasing (being chased by?) the local flora and fauna.

We were invited too, but Andy had a few things she couldn’t miss here in California. Sooooo, Devon and Jeremy went off to keep company with Elisa and the boys, while Andy and I hold down the fort.

I have to say, it’s kind of fun having my wife off on an adventure that I get to enjoy only vicariously. About 11 years ago, when we were moving to California (the previous time), I wrestled with the logistical issue of getting the Skyranger from Boston to Palo Alto. It was going to be a slow, noisy, hot uncomfortable set of flights, spanning at least a week, and punctuated by sleeping out at airfields in a nylon tent with the occasional Motel 6 thrown in on good days.

Devon was about 8 months pregnant with Andy at the time (though we didn’t know she was going to be Andy – we were still expecting Arcadia [‘Cadie’]). Being a reasonable and loving husband, I assumed that she was going to fly out on United and let me do the low and slow Skyranger ferry trip myself. But no. She said that this was going to be the last chance for her to have an adventure until, well, she had no idea, but she sure as hell wasn’t going to let this chance go by. And off we went together on one last amazing adventure together before the kids arrived.

In the decade since then, I’ve continued to travel. Sweden, Japan, Vancouver, west Texas – wherever – while Devon’s stuck home with the kids, changing diapers and digging mashed PB&J out of the pages of overdue library books. It’s been too easy to forget, for both of us, that she’s got as much adventuring chops as I do. She’s just not had the opportunity for the past decade. So, as I said, it’s kind of fun having her off on this adventure while I stay home and be Mr. Dad. Of course, she’s still got Jeremy in tow, so I’m only pulling half weight, but it’s a step, and it’s good for all of us.