One of my favorite quotations about journalistic photography goes along, naturally, with a picture. The setting of both was the 1995 reenactment of van Ryneveld and Brand’s London-to-Capetown in a Vickers Vimy. The original had crashed due to engine failure halfway, but van Ryneveld and Brand obtained a replacement to continue their journey.

During the reenactment, the replica Vimy (painstakingly built with tens of thousands of hours of labor), suffered an engine failure at almost the exact location of its ancestor, over similarly foreboding terrain.

The photo in question is from the cockpit, looking out across the starboard wing and very-obviously non-functioning engine, with an endless carpet of trees below. It takes a moment of introspection to realize the consequences that the photograph implies. The National Geographic staff photographer who was on board remarked about the shot that “the times you get the best pictures are those times when you really shouldn’t be taking pictures in the first place.”

In both cases (historic and re-enactment), everyone walked away relatively unscathed, but this anecdote is my excuse for not having any pictures of the most interesting events of the past two days. Plenty of pictures at the Picasa album, as usual, but none from the point when the boat we took out to Elephanta Island started to capsize, and none from our explorations of the Mumbadevi Shrine, where we held our hands over the sacred fire, and got ourselves blessed and daubed by the temple priests.

For something closer to the excitement of a Vimy engine failure, however, I did grab a clip of one of our rides in the famous black and yellow Mumbai taxis we’ve been using to get around. Scary stuff. This particular driver only caught one actual pedestrian on his front bumper (no harm, no foul), but was fairly adept at the “brush back” swerve to keep others out of his way. Yow.

Okay, Sunday was substantially taken up by sitting in an air conditioned room, discussing the innumerable ways in which education in India is broken (and how people are fixing it), so I’m going to try to take a few minutes to catch you up on the previous days’ perambulations. 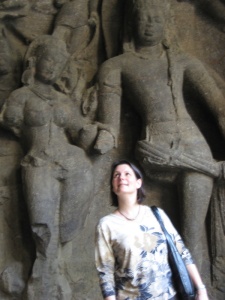 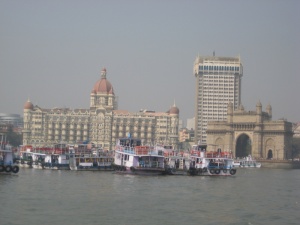 Friday – first day “in country”. D and I braved foot traffic over to the docks where small ferries took tourists to Elephanta Island for 120 rupees apiece. The island has a network of 5th-century caves hewn out of rock, ornamented by elaborate shrines to Shiva. A majority of the tourists here are Indian – we struck up conversations with a young woman from Calcutta and her parents, who were doing the same circuit we were.

Off the boat, through the gauntlet of hawkers and up the stone steps in 90-degree heat. Whew. 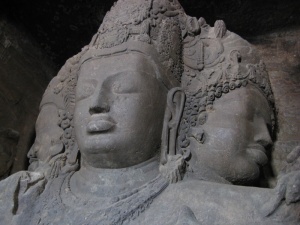 But the caves were refreshingly cool. Most of the carvings had been vandalized; the guidebook claimed defacement by Christians fighting idolatry. They left intact, however, a large carving of “The five faces of Shiva,” apparently because they felt its three faces represented a trinity. Wait – what? Yes, only three faces are represented; a fourth face is implied looking backward into the stone from which it was carved, and the fifth face looks upward and is not actually shown since it is transcendental and not visible to mortals. And I thought Talmud was tricky to get my head around… 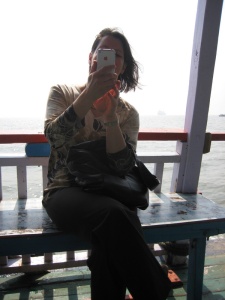 The winds that had made the caves so refreshingly cool had picked up by the time we got back to the docks. As our return ferry made its way through the miscellaneous oil tankers, aircraft carriers and submarines (I kid you not!) in the harbor, more and more spray from the bow kept flying up and anointing the windward passengers with that “essence of Bombay”. Naturally, more and more of them shifted over to the leeward side, until we were at a rather uncomfortable list, with stuff on the deck starting to roll downhill (see previous note about the times you get the best pictures). 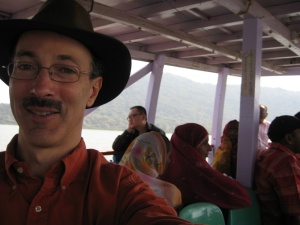 The captain – or someone who looked suitably alarmed and authoritative – started yelling at us all in a language that I didn’t understand, but clearly indicate that we were to all move back windward and just get used to the spray. It seemed a reasonable preventative to finding ourselves actually swimming the rest of the way back from a capsized boat, so we cheerfully complied. 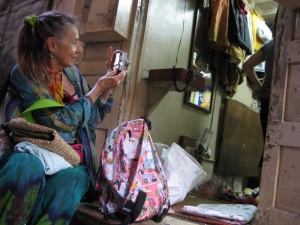 Once safely ashore, we decided we were done for the day, and began our trudge back to the hotel. Picking our way through a backstreet in a supposed shortcut, we were nearly sideswiped by a taxi that pulled up with two American women waving wildly at us through the window. By the time my brainstem had recovered from its primal survival reflexes, they’d clambered out and 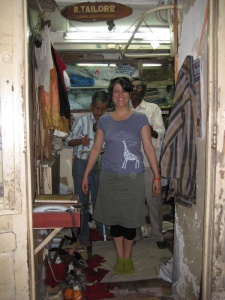 established themselves as the folks we’d sat with on the plane over. Emily, the retired flight attendant and her protege, Hayley the TV producer. Oh, and their Indian tailor, a quiet man named Ram, with sparkling eyes and a heartwarming smile. Emily had met Ram 18 years ago, and looking him up again was one of their first orders of business when she got back to Mumbai. They’d spent the morning getting measured and fitted for a bewildering array of outfits, and were heading back to the shop for some some final business. Ram insisted on taking us upstairs for some yummy masala chai (think Thai iced tea, but hot), then we followed the three back to Ram’s shop, hidden down the back alley through the electrical room of a hotel near the terminus. 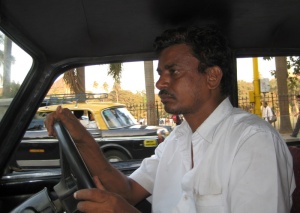 D and I made it back to the room hours later, exhausted, but having braved our black-and-yellow cab initiation and yet more clothes shopping with Emily and Hayley. A bold and dashing adventure, if ever there was one. Which there was, the following day…

[Whoops – Devon’s gotten up; I’ll have to write more later, I think]