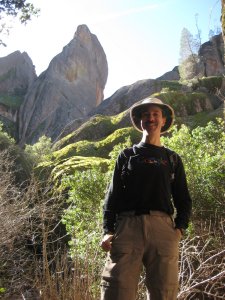 Last week at this time, I was weighing the fine balance of subfreezing night air in Central California’s Pinnacles National Monument against the smoky blaze of a campfire overfed with split wood. I had a guitar in hand, and was trying to lead a warmly-bundled circle of fellow campers through some semblance of “City of New Orleans” while an overzealous drunk slapped me arhythmically on the back and sang what must’ve been the verse that Arlo decided to leave out.

By the end of the night, my fingers were bleeding and my voice was shot for the rest of the week. Hard to remember when, in recent years, I’ve had more fun. Who would’ve guessed that these twenty-somethings would ever have heard of “Free to Be”, let alone be eager to plow through it, hand motions and all.

Tonight I’m a world away, in New York. Surrounded again by skyscrapers of stone – though this time assembled by man, not Nature. But Nature still plays her hand here; she’s blown a winter squall down on us that has even the New Yorkers running for cover. Fortunately, instead of a campfire, I’m tucked into one of those pocket hotels, the Paramount, just off theater row. My group, along with our counterparts from Bangalore and Trondheim, have gathered at the New York office for a week of brainstorming and team building. This morning we did the ice-breakers (“Tell everyone two true things and one lie about yourself”); tonight is karaoke. I’ve begged off of the latter for want of fully-functioning voice, and a vague half-mumbled philosophical objection. For me, singing is something you do with people, not at them.

But it’s been fun so far. Still, I’m struck with the notion that I really ought to be doing something New Yorky this evening rather than holing up in the room and writing. Seeing a play (we are in theater row), hitting one of those pretensious hoity restaurants. Or finding some quirky club with the next folksinger I’m going to fall in love with. Maybe tomorrow (and Chrissy Hynde echoes “Maybe someday…” in my head – I’ve never gotten over that song).

I also keep hearing another of my favorite lines: “Someday always turns to never, if you wait long enough”. Reason argues back: no point overdoing it on the first night. It’s only prudent, especially since I’m still recovering from the Pinnacles. G’night all – this city may never sleep, but it’s gonna have to bide its time while I do.