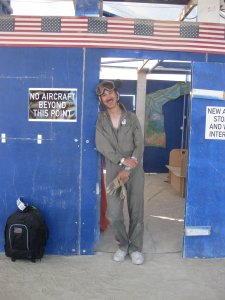 The stories that are the most worth telling are always the hardest to start. My friend Dan called me out on never having made good on a promise to describe my Burning Man excursion earlier this summer, and he’s caught me with no more excuses. There are so many stories to tell, and we need to tell them sooner rather than later, so that, as Herodotus put it, “time may not draw the color” from what we’ve seen.

So – to start with, if you’ve never been to Burning Man, it isn’t what you think it is. And I’m not going to be able to change that. We all try but, at best, we’re just blind men describing the elephant. At worst, we’re Pavlovian voyeurs, confirming your worst mass-media fantasies-for-sale.
My take is this: Burning Man is an extreme art festival wrapped in a dense layer of self-organized experiments on alternative social models. The art? Well, it’s hard to describe the sensation of standing under the welded steel skeleton of a 75-foot long snake, swaying pneumatically above your head while it billows and snorts propane flames into the desert sky. But the Flaming Lotus Girls of San Francisco [sorry – said “Oakland ” originally] thought it would be cool to build something like that, so they did. Or the “cupcake racers” bobbing and weaving past as you make your way through the dust. But someone clearly thought – “Hey, what if you had a man-sized cupcake built over the chassis of an ATV…” and built it.
I guarantee – every minute out on the playa, you’ll pass something that challenges your imagination, and your interpretation of what art is.
And then there’s the grand social experiment, which is its own kind of art. Just as the flaming snake challenges your default assumptions about what “scuplture” is, folks out here feel free to challenge our default assumptions about how people live and interact. They ask “what if”, make up their experiment, and invite passers-by to try it out.
Some of these experiments are city-wide: how does our society change if things aren’t allowed to be bought or sold – only given of free will? Some of them are personal experiments: how does my life change if, instead of wearing a blue blazer and Brooks Brothers khakis, I paint myself pink and walk the streets wearing only fuzzy green chaps?
For my mileage, the camp-wide experiments are the most interesting. Camps tend to be social units of 10-100 people who come together to build an experience that others can join in. For example: Each year, Ashram Galactica assembles a desert hotel fit for a sultan – towering tents decked above and below by beautiful tapestries and rugs, fountains and furniture, assembled amid the swirling dust of the Black Rock Desert. No, you can’t make a reservation. But you can come by each evening to dance among exotic arabesque beauties and drink with whatever the expansive enamel-and-gold decked bar is serving (for free, of course). And if you put your name in the hat and stick around to the appointed hour, you may be one of the four lucky Burners who win an evening’s stay (with full amenities) at the Ashram.
Of course, most camps aren’t nearly so elaborate. Camp Contact is just a swarm of folks drawn together by a love of salsa, tango, and other contact dances. Drop in, with or without partner, and learn, dance, or just hang out with other kindred spirits. Daisy’s Diner serves breakfast to whoever comes by in search of a meal. Roller Disco (replete with a wall of all-sizes loaner skates) is just what you’d expect – except, of course, assembled from pieces trucked out to the desert floor.
Unlike most camps, Camp Hookup doesn’t stay in one place. The “Hookers” (yes, that’s what they call themselves), roam the playa armed with necessity-loaded backpacks, looking for people who need to be hooked up with something. Bike tire blown out? She’s got a patch kit and pump. Bandaids? Sure – what size? Water bottle? Carabiner? I was astounded how completely they’d nailed down their niche.
A surprising number of camps are perennial, blossoming at a different place in Black Rock City each summer. Since the city is laid out radially, in rings around “The Man”, directions are given in terms of clock-hour radials and alphabetically-sorted ring name. Innermost ring begins with “A”, next is “B” and so on, according to the year’s theme. So “7:30, halfway between Chance and Destiny” is not so much a prognosis for the future as it is a geographic description.
Our was unusual in this respect – you could always find us at the same place every year: take the 5:00 radial out to the edge of the city, make a slight left turn and follow a half mile of emptiness until you reach the fence that demarcates where BRC ends and where the federally-administered desert begins. There we are: the airport bums.

Just outside the fence is an improvised runway and tiedown area with anywhere from 10 to 50 planes tied down for the night. The “terminal building” (with its aptly-named “Phoenix Lounge”) rises from the dust each year at the hands of volunteers headed by our patron saint Tiger Tiger. The four-plywood-walls-and-a-mesh-roof structure itself is the focal point of a motley constellation of REI tents, trailers, RVs brought out by friends and family of those who’ve flown themselves in. The two other reliable stars of this constellation are the old Russian AN-2 (the only plane let inside the fence) and the broad welcoming tube and fabric shade of the Black Rock Travel Agency (a perennial camp-within-a-camp).
The characters are too colorful and complex to capture in the thin narrative of blog text. Beyond Tiger Tiger, there’s Dragonfly – irrepressible, uncontainable, occasionally unmanagable – epitomizing the spirit of the pilot here; who knows what goes on in that plane? Hoot, our safety officer and “Designated Asshole” tries to parlay his decades of desert flying experience into briefings that will prevent us from killing ourselves. Then there’s DP, Hatter, Tutu and – no, I just can’t do any of them justice and still get to my point before I run out of steam.
So let me just focus on me for a moment here. I fly out to Burning Man because I like to fly. I love the freedom of asking “What’s over that ridge?” and going over to find out. More importantly, I love sharing that sense of curiosity – that sense of discovery and wonder – with other people.
I mentioned early on that BRC operates on a gift economy. You bring everything you need, but also bring something to give away. Some set up a hotel bar and give drinks to passers-by. Some bring roller skates or breakfast fixings. Me? I bring the gift of flight. As soon as it’s light enough to shake off the evening chill, I like to be out, across the fence preflighting my plane on the makeshift tiedown ramp. Then wander in through the terminal, look around and call out to noone in particular “Anyone need a ride around the playa? I’ve got one empty seat, leaving now.”
People come out to the airport looking for rides. Not anywhere in particular, just up. Up for a few minutes to take a lap around the city and witness this ephemeral civilization from the air. Many folks I give rides to have been coming out to the desert for years; most have never been in a small plane before. Buckle in, give them the safety dance and lecture, then off we go, bouncing through the dust until we break ground and climb away into the delirious blue above. Gentle 180 degree turn to enter the clockwise traffic pattern, and start the narration. Yes, we can open the window. Shall I take a picture of you? Is that your camp down there?
Often my passengers are twenty-somethings, out to catch the vibe they’ve heard about. Grizzled journalists. Airport volunteers, whenever one asks. I gave a ride to an elderly woman in a wheelchair – her family said she’d be coming to the burn for years, and had always wanted to see the city from above.
It’s a rewarding job, and for which I get a front row seat to personal revelation. Usually there’s stuttered joy and excitement. Sometimes just quiet. When we got my wheelchair passenger out after her flight, her son – who could’ve played stunt double in a Hell’s Angels movie – couldn’t stop shaking my hand. There may have been a tear in his eye as he told me how much this meant to her.
That’s why I do this. From morning until the afternoon winds kick up too high to make flying safe – load ’em up, fly ’em around, instill just a liiiittle bit of that sense of wonder, then return them safely to earth to resume their terrestrial life.
Well, that’s not the only reason I do it. Remember, I love to fly. I still get that sense of transcendence every time the earth drops away and leaves me free to press my wings against the waiting sky. Some time late in the afternoon of my third day on the playa, I was giving Hatter a ride around the circuit. We’d diverted north to tour the hot springs and taking a few turns on the ridge. “Man,” I said, “this is great – I could do this all day!” “Pablo?” “Yeah” “You have been doing this all day!”
So I have, so I have.
(my meager sample of pics from this trip are at http://picasaweb.google.com/david.cohn/BurningManAug08)