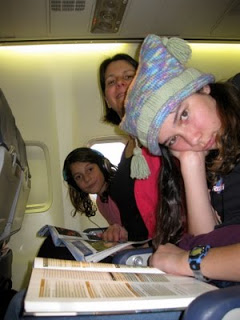 “Until one is committed there is hesitancy, the chance to draw back, always ineffectiveness.


The moment one definitely commits oneself, then providence moves too. A whole stream of events issues from the decision, raising in one’s favor all manner of unforeseen incidents, meetings and material assistance, which no man could have dreamt would have come his way.”
— W.N. Murray, The Scottish Himalayan Expedition


Or, at least, that was the idea. The “whole stream of events” that were supposed to raise in our favor didn’t quite kick in, but we’ve made it to LA on the shakedown leg of the family expedition to South America. Two parents, two kids. We’re camping at my mom’s tonight, then at an ungodly hour in the morning, the five of us (mom in tow) heading back to LAX to catch our nine-hour hopscotch flight to Ecuador. I, uh, cringe with anticipation.


Still, our tally on “unforeseen events raising in one’s favor” is way ahead of the Bailar-Hong clan, who we’re due to meet in Quito tomorrow night. They’re flying out of DC, and just tagged up to let us know that, the airline thinks they’ll be able to get out ahead of the 20 inches of snow that are forecast to hit tomorrow morning. But, he admits, “we could have issues”.


In any case, we’re definitely committed.

One response to “Committed”