Ten p.m.in Accra and we’ve been going since godawful early this morning. Our little band of adventurers has been to Kumasi, been celebrated by schools full of rural girls who are being given a chance to learn, debated hybrid seed vs traditional cocoa production strategies with village elders, and given an impromptu address to the national court of the Ashanti tribal nation (yes, Elliott, of course – and there’s no way I can do the story justice).

It’s ten p.m. and we haven’t even debriefed the day yet. Don, Darian and Andy are working out how to keep the Liberian contingent focused when we get back to the states, Glen’s on the phone getting interviewed by the Wall Street Journal, and I’m completely toast. Oh yeah, we’ve got a six a.m. wakeup tomorrow morning for another day on the road. So I’m going to try to get in a few minutes of interstitial writing.

Seems I keep writing about the stuff we’re about to do, but never follow up with how that turned out. Lemme try to remedy that: Today was, the usual kind of eventful. After getting to the airport, in the air and to Kumasi, we split up on three different itineraries. Kim and I hopped in a car with CARE employees Suli and Maholi to head out to the countryside. We learned just how different Kumasi is from Accra: cows wandering the streets, crazy traffic jams with street vendors and beggars mingling nimbly through the semi-modern urban chaos. Maybe Kumasi is just like Accra, with different colored dust. That part is still a blur.

Apparently though, in Kumasi, you can always get across town easily; you just head out of town in the opposite direction, careen through a maze of bumpy dirt roads that would baffle Theseus, and pop out, magically, on the road you originally wanted. At least, that’s the way it seemed.

We picked up Vida, the program coordinator, at the other (magical pop-out) side of town and headed up to Antoakrom (Twi for “way the hell out in the countryside”), where we were to pick up Ashusta, who’d just come on as the local adminstrator two weeks earlier. From there, we turned off onto the really small road to wend our way out to Atobrakom (Twi for “even further out than Antoakrom”) and got out at the top of the hill to meet the village elders. 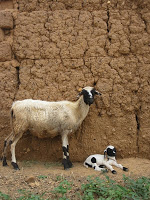 Mind you – these dirt roads were nothing like the ones in Harper. You could take these in a normal vehicle without seriously worrying about the entire vehicle disappearing into an innocent-looking puddle. And the village, ramshackle as it appeared, was surrounded by acres and acres of healthy cocoa, orange trees and jatropha. Goats and sheep roaming freely reminded me that aside from a couple of piglets and skittish chickens, we’d seen no livestock in Liberian villages. That was rather telling.

The elders were very approachable – thanked us for coming to check them out, and signaled us to follow them for a wander down “main street” to the shady porch area of a small cement building standing out in the patchwork of thatch and mudbrick huts. Plastic lawn chairs were brought out, and we settled in for our parley.

We chatted about life in the village – whether the kids wanted to leave the farm for the big city (no, quite contented, they said), what their challenges were (getting money to buy fertilizer for the hybrid seedlings), and what we thought of the weather (insanely hot, thank you very much – don’t think we’re going to get that snow that had been forecast).

Bit by bit, other senior-looking villagers wandered by, greeted each other enthusiastically, exchanged handshakes* and settled in. (*Note: the Ghanian handshake has different choreography than the Liberian one. Liberian is low grip->high grip->low grip->finger curl->snap, where the snap uses the first two fingers. Ghanian is either low hand slap->low grip->middle finger snap, or low-high-low->middle finger snap. Depends on how chuffed you are about seeing the person you’re greeting.)

Anyhow, eventually they decided they’d assembled quorum and would begin the formal introductions. We’d been introduced already, and had been melting\\\\\\\talking for about 20 minutes already, but protocol is protocol. Maholi explained that first we’d be greeted by the elders: they stood, greeted and welcomed us, then went around our little circle clockwise, shaking hands. They sat, and we stood, greeted them and explained our purpose in visiting, then went around the circle clockwise, shaking hands.

All sat down and the elders shared a laugh, as if to say “Well,that was fun”. We probably talked for another 45 minutes, about the new hybrid cocoa breeds, about alternative crops, and about the livestock. We finally got to the point where I still had some questions, but suspected that I would be dead of heat stroke by the time I’d finished. I conspicuously glanced at my watch and askedKim about our time constraints with a vaguely pleading. “Oh my, yes, we’d better get going.”

[Note: writing of this narrative has stretched out to the next day, on the way back from Akim Kukubi, and we’ve been pulled over at a roadside checkpoint. Something about being a touch over the limit and checking licenses. Fred, our driver from the NGO we’re visiting, has stepped out for a cheerful little conversation with the policemen. Everyone’s all smiles, and we assume he’s just being shaken down for a small bribe.]

Anyhow – back to yesterday. We were done sitting, and it was time for the village tour. First to the nursery where the new, hybrid seedlings were sheltered, then off to see the cages where they were raising “bush rats” – enormous skittish rodents the size a small dog.  We passed some palm nut bundles and they explained the whole palm oil and palm wine process, as they saw it. Vida picked up a stray palm nut, cracked it with her teeth, and handed it to me to examine. “I can eat  this?” “Yeah, yeah, this one’s good.”

I chewed it as we went along. Nutty, mild – not much to remember, in contrast to the whole Cola nut and palm wine ritual back in Little Wlebo (Did I write about that? No? Damn, will have to fill in later; keeping a smile with mouth full of bitter Cola nut and kerosene-grade palm wine – and remembering to spill the dregs of the glass out onto the ground to honor the ancestors). 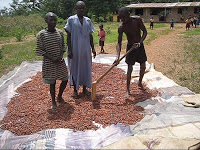 Anyhow, we walked and talked. Came over the hill to where some men were drying cocoa beans in front of the elementary school. We got the demo of how the beans were raked out and where they were bagged, weighed, and stored. Cocoa is deeply woven into Ghana’s economy, and as a result is enmeshed in a complex web of official regulations and unspoken agreements.

Was offered to sample some nuts, at which point someone up the hill decided that school was out on account of white folks appearing, and cascade of kids in matching peach-colored tops came spilling out to watch us. Back when we first arrived, I’d mentioned my interest in sampling fresh cocoa pod fruit (you would have guessed this from earlier posts), so we wandered further down until we reached one of the roadside plots. 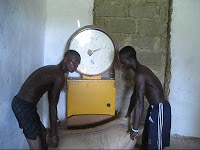 It was late in the season, so most of the trees were without fruit, but our entire hosting contingent started pulling the remaining pods off the trees and handing them to me. In the blink of an eye, my arms were full of pods, and I begged them to stop – I only wanted a single one to taste and bring back to the rest of the team. The assemblyman beamed with a broad, happy smile: “Oh, it is nothing. We are happy to give you this GIFT to take back to your friends.”

One of the greatest challenges of these visits is setting expectations. We’d come as guests of the agency that was providing the village with agronomic support and education. We weren’t supposed to be in the equation, but somehow, when the Americans show up, something goes “click” and the expectations set in. It was the same thing that found me at the center of an (only slightly) irate mob of villagers in Harper: we’d come, and we hadn’t brought a damned thing to offer as a gift (Barkue had stepped in on the Harper fiasco and given the instigator a dressing down that I could somewhat make out from the local dialect: the nervous-looking white folks were guests of the Carter Center, see? The Carter Center invited them to come along to observe the work being done to help Little Wlebo, see? If you’ve got stuff you want, you ask the Carter folks, see? You freak out the guests, and you’re in the Roslyn and Jimmy Carter Doghouse for good. See?  – Barkue’s tiny, but she packs a helluva verbal punch when she’s pissed off.)

Anyhow, there we were, arms full of cocoa pods, halfway out of Atobrakom, with not a damned thing we could offer as a gift in return. Barkue, of course, was half a continent away, talking some sense into Liberia. Think think think.

I tried playing the innocent incompetent – yes, I do that one well: “Oh! You’re too generous! We can’t possibly accept – we’ve have nothing we can offer you in return.”

No dice: “That’s okay”, he said warmly, “Any little thing will do.”  Damn, damn, damn – I was all out of ideas. We really didn’t have anything we could offer. I looked over at the CARE staffer for help and got a friendly but uncomprehending smile.

At that moment, Kim’s cell phone rang. Kind of insane, to think of it. We’re three hours out in the bush in rural Ghana, and there’s cell phone coverage (that’s another conversation, by the way. Everyone says that mobile is the future of communication for Africa, but you only believe it when you’re standing in a field outside of Atobrakom, arms full of cocoa pods, and your phone rings. But back to our story…)

Glen was on the line, just checking up on our timing. His meetings were done, and he was going to look at some of the local hotels to see if they’d work as a base of operations in Kumasi. Kim handed me the phone (after I’d handed off my plethora of pods), and I tried to find a discreet stance from which to explain our situation.

Glen asked the CARE staffer who was accompanying him for ideas and came back with a winner: we’d ask Maholi to explain that we’d be sending books for the school with him on his next visit, after he’d checked with the teachers on what they needed most. Maholi agreed that this seemed like a fine strategy, and we were shuffled into our car with great fanfare, warm smiles, and a series of hand slap->low grip->middle finger snap handshakes. Another morning, another site visit…