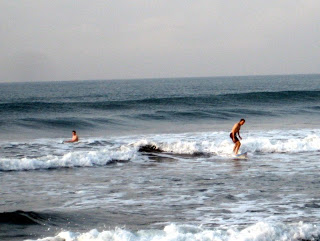 [Yikes – just realized that I never posted this. Slightly out of chronological order, sorry!]

Final leg of the flight home to San Francisco. Last night the gibbous moon rose over Accra like a bowl full of rice from the east. This morning over pre-dawn London, it hung on its side, spilling out into the west. We really had come that far on our magic carpet.

But this is the last chance I’ll have to write before the stark images of this trip begin to fade, washed away by home, and family and compiler errors and all those things that really matter. :-).  So let me make good on at least one of my promises and write about… surfing.

The moment I want to capture is this: It was 7:05 in the morning, and Andy and I were standing on the back deck of the Kendeja Resort, wondering whether we should hunt Craig down, knock on his door and see if he was up for a third day of heading out. We’d agreed to meet at 7:00, but hadn’t quite settled on where. Time was a’ wasting, and I wanted to surf.

Craig is a South African expat who’s just found himself becoming the general manager of the resort, not entirely by choice. When I was first introduced to him over email a few weeks ago, he was still the “Food and Beverage” manager, and the local “go to” guy for surfing near Kendeja. Andy, the then-GM, asked Craig to fix me up with a board and to be prepared to go out and show me the breaks before our team’s normal program started each morning. By the time I arrived, Andy had gone on holiday back to South Africa and informed Kendeja that he wouldn’t be coming back. Craig’s field promotion came the week they were not only hosting our group, but also an international summit involving Chinese dignitaries, the former prime ministers of Ghana and Mozmbique (voted “Coolest Hairstyle on the Planet”) and President Sirleaf herself. No pressure here…

But once the powerful and fabulously-coiffed had departed, Craig tracked me down and worked out a plan. We’d meet on the back deck at 7:00, then pick up boards from his bungalow and get in a morning session.

I hadn’t come to Liberia as an excuse to surf, but I have to admit that it was high on my list. It was on my list ever since that lunch meeting last year back in California where President Sirleaf touted Liberia as a great undiscovered surf paradise (the Omidiyars, who hosted the lunch, presented her with a custom  board bearing the Liberian flag). And there’s the beautiful documentary, Sliding Liberia, following Nikolai Lidow, heralded as “Liberia’s first surfer”. Nikolai came wandering through Liberia just after the war and noticed that Robertsport had a technically perfect point break. The waves broke off the point and rolled all the way in to the shore in a way that rivalled Waiamea Bay. He came back with some friends and settled in for some surfing. Sliding Liberia documents not only the surfers, but the curiosity of the shattered population around them, their embrace of the crazy Americans, and the hope that springs from the emerging friendships.

Anyhow. We weren’t going to be able to make it up to Robertsport, so I was making do the best I could at Kendeja. Dan, our contact with the Liberian State Department, got me in touch with Don, who put me in touch with Andy, and there I was.

First day out was, if anything, comic relief for Craig. He has that easy way about him that I’ve learned to associated with Aussies – nothing’s ever a problem, and it’s always “all good”. We walked our boards halfway out to where the waves were breaking – the sand is smooth and level, then paddled out through the breakers. I’d been learning on a long board, about 8’6″, and biggest board in Craig’s quiver was a 5’6″ runabout with around half the surface area. I kept flopping around left, right, and over the front at the slightest disturbance. But it was “all good”.

Sat up on our boards (flop, climb back on, flop the other way) and hung out, picking up the pattern of the morning’s swells. Fairly straight into the beach, breaking both ways, occasionally closing out in the middle. Big enough to be fun, but not treacherous, even for me on a squirrely shortboard with a pointy nose that I continually envisioned impaling me on the slightest wipeout.

Craig caught a messy left break and rode it in a few dozen meters before bailing off the back. I tried to catch a right and failed to get enough speed for the drop. Craig caught a right break. I went in too far forward and pearled, feet and fins in the air marking where I’d gone under. Craig caught another left… and I  told him I was going to move in closer to shore to try my luck with the whitewater (surfer equivalent of the kiddie pool). No worries, it was all good.

Catching an unbroken wave means maneuvering, skateboard-like, along the constantly rising front wall of the wave. Requires some agility – you’ve got to match speed and descent rate while staying ahead of the break. A wall of whitewater on the other hand just comes from behind and pushes you ahead on the flats. All you need to do is stand up. Which was more than I could do on Craig’s board that morning.

Somewhere just before my arms gave out, I finally managed to pop up for a few seconds. I was nose high, hunched over and dragging my tail in the water, but I was up and moving. It was a tiny little glorious moment. Walked the board out and caught a second, then a third in a row. By the fourth try my arms were toast, and just couldn’t even push mself up on the board. I yelled out to Craig that I needed to head in, and he waved me off – it was all good.

[It was only over after I got back to the room that I discovered Devon had been hanging out on the shore taking pictures.]