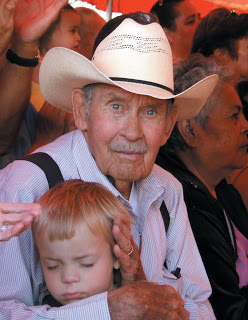 Sig hung on until Wednesday night, apparently in good spirits. Gretchen tells me that on Monday, he’d recovered enough that he decided to get up and take a walk. A few steps was all he wanted, and damned if he didn’t manage that (albeit with family holding his arms). But he was all there – smart alecky and funny as all get out.

Wednesday was a good day too, apparently, with lots of friends and family stopping by. In the evening, as the last couple of visitors were saying goodbye, his breathing slowed down, and within a couple of minutes he was gone. Wednesday was Ruth’s birthday. He’d said goodbye to her 22 years ago, and G thinks maybe he decided that he’d pay her a visit as a birthday present. He was, after all, a thoughtful man, and as devoted to his wife as any could be.

I’ve had to work a bit at not second-guessing the impulse to have gone out on Tuesday – but we always have to second guess ourselves before moving on. While, in retrospect I could have seen him, I think he had enough friends around him that it was fine.  I’ll be going out to Colorado next weekend, with Jem, for the funeral. Sig said he wanted a big party, like the Unfugs used to throw for funerals, so we’re going to do our best to fulfill that wish.

It’ll be good to see all the people in whose lives he made such a difference. There’s that gravestone saying that, to live in the hearts of those you leave behind is never to die (appropriately enough by an Orr – poet Hugh Robert Orr). If that’s the case, Sig will be with us for a long, long time.

[BTW – I know I must’ve gotten all sorts of details wrong about the family history in that last post – it was all remembered from conversations strung together over all these years; many thanks to all of you for your kind words, in any case]