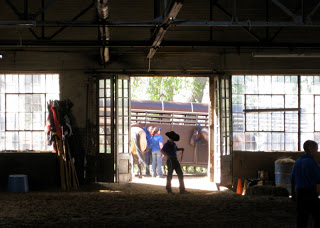 Well, I got about a page and a half through my walk down Main St. in W’burg, about how even a tiny town that’s barely on the map has more stories than I could write in a lifetime. About how that reflects on the immense depth and richness of the fabric of the human condition. And… I couldn’t figure out where I was going with it. Sounded pompous and condescending, like I was trying to write 19th century romantic tripe.
So let me try again. It’s Monday now, heading back on Southwest 1298 from Denver to San Jose. Had a good 2.5 days with Brian, Gretchen and the Sporleder-Orr brood. Saturday morning, lazed about the way only a newspaper family with four kids and two cats could – scattered sections of two or three different papers spread amid sprawling kids with laptops across the family room floor. Cats moving strategically through the mess so as to optimize the sunlight-to-shoo-cat ratio.
The kids had rodeo that afternoon – the final show of the year for their horsemanship team. Was going to be basic stuff; much of the team was new, and the already limited display was going to be further curtailed by the 40-60 mph winds – Coach Deb decided they were going to need to ride indoors, in the car-dealership-turned-arena.
We headed up to the Sporleder ranch around noon, where G’s brother Karl and wife Debi had cared for Sig during his decline. We all sat and talked over over do-‘em-yourself sandwich fixings dropped off by the town deli – no one had ordered them; the owners just figured that Sig’s kids might have other stuff on their minds at the moment. 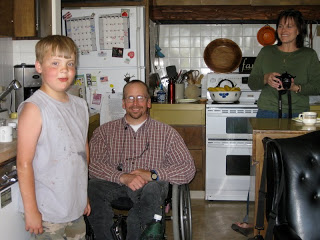 We sat, looking out at the breathtaking view – wind coming off  the Sangre de Cristo range behind us, the Great Plains stretching endlessly eastward ahead, and Karl, who ought to trademark the Sporleder sense of humor, remarked “Yup, you can see the whole San Juan Valley from here – there it goes,, over the mountain, on its way out to Kansas.”  The San Juan Valley, back behind us, I understand, has a bit of a topsoil problem.
Brian offered to take the kids out to shoot the Daisy .22 – one of the things Jem most looks forward to about Colorado is going out shooting with Brian, and this looked like the only chance we’d have. Karl offered: “Hey, if you shoot upwind, you can catch the bullets as the wind blows ‘em back to you.”  Felt like it.  But we found a hollow in the dry riverbed that was relatively wind-free and the kids all took turns plinking old business cards I’d fished out of my wallet and stuck on a downed branch for makeshift targets. 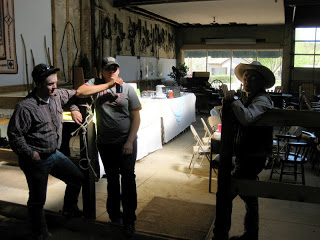 Rodeo was – well, it was a beautiful little small-town down-home Americana kind of thing. Deb mustering nervous kids out back , while their parents – the ranchers and farmers and convenience store clerks and all that  made up this town – leaned on the rails, caught up on gossip, and cheered like it was roundup time. Behind them, the potluck barbecue materialized – when you come, you bring a bowl, of bean salad, or pulled pork, or peach cobbler – and bit-by-bit, a banquet appeared.
Sunday morning was Saturday redux, but in greater splendor: Sunday comics, in full color, decorated the family room like autumn foliage in Vermont. We had a lazy morning ahead of us before some party setup at the Community Center, and over to the church for the 12:30 memorial service.
At least that was the plan, before we got a panicked call from Sally, over at the Center, who’d peered in through the locked double doors and thought that no one had cleaned up from the previous night’s high school graduation party. It turned out just to be a trick of the light, but B&G had mustered the kids into clothes and cars in 10 minutes flat, and since there we were, we figured we might as well start setting up.
By the time we’d gotten tables and chairs into place, the same procession of moms and aunts and cousins and neighbors that had conjured the previous evening’s potluck were filing in, each with their casserole, salad or pie. 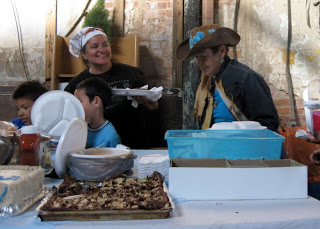 [Okay, skip a bit brother…]
Church service – Setsons held in the lap with both hands, pastor in black with a bolo tie, quoting Psalms, Isaiah and the cowboy poets. Reverend in denim with an old six-string, leading “Amazing Grace” as the old windows resonate with the sound of our voices. And the party – Brian and I seeking refuge behind the bar on the pretense of bartending. But this wasn’t a fancy crowd; all we ended up doing was handing out beers, and passing the big bottle of Jack Daniels (Sig’s favored drink) across the table for folks who wanted to “warm up” their coffee a bit. It wasn’t a fancy affair but, I think everyone would agree, it was just the sort of thing Sig had wanted.
That evening, by the time we’d packed the last guest off with leftover brownies and pot roast,  folded up the last table and restacked the chairs (for the third time – finally the way the CC supervisor had wanted them), I was knackered. We’d been going non-stop on our feet for ten hours, and I couldn’t see how Karl, Debi, Brian and Gretchen were still going. And yet we were..
Flopped on the floor back at the house that evening – still strewn with the morning’s comics – I remembered a Teddy Roosevelt quotation I’d come across just the day before, nailed to the wall of Deb’s corral: “Far and away the best prize that life has to offer is the chance to work hard at work worth doing.”  Today I’d worked hard – to help some friends, to help strangers, and to help everyone honor the memory and wishes of a great man we all loved. I had a helluva lot of fun, I was dead tired, and I couldn’t have asked for anything more than that prize I’d been given.
[a few more gratuitous photos…] 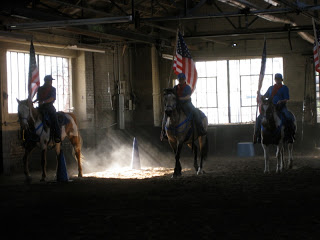 2 responses to “The best prize life has to offer…”