The idea behind the Seasteading Institute is to identify and solve the technological, social and legal challenges behind creating large, self-sustaining floating communities/cities/nation-states. To build experience and scale up, TSI planned Ephemerisle, a series of experimental floating gatherings scaling up from a few houseboats and attached platform in a secluded bend of the Sacramento River delta (last year) to a full-blown free-floating community outside US territorial waters (7-8 years from now). The idea was to crank up the difficulty and scale each year, building on lessons learned in previous years.

This year’s Ephemerisle was to still be held in the river delta, but in busier and deeper water (40 feet). Then, a few weeks before the start date, the insurance premium for the event ballooned up to $135,000. The organizers took a poll, looked at their finances, and announced that they had no choice but to cancel. 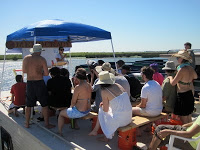 This, however, is where the radical self/inter-dependence of Ephemerislanders was just straining to kick in. Veterans observed that, while Ephemerisle itself had been canceled, there was nothing preventing a band of like-minded citizens from “spontaneously” gathering at the designated spot and deciding to raft up together for a few days of experimental community. Thus was born The Floating Festival That is Not Ephemerisle.

Coming back now, after three days on the water with Zorbs, giant Koosh balls, spontaneous participatory democracy, rooftop “lightning talks” on everything from “Practical Life Extension Science” to “Telepresence Robotics” and “De Facto vs. De Juris Maritime Law”, homebuilt sailboats, midnight tiki-lounge dances and trapeze shows — well, it’s hard to come back to what Burners (the folks who go to  Burning Man) call the “default world”, the world where we don’t constantly challenge our default assumptions. 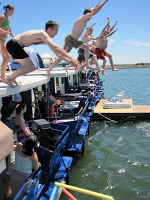 In a way, it captured most of the elements I love about Burning Man – the intentional, experimental community, the communal problem solving that you get when you assemble a bunch of really smart, self-reliant individuals who aren’t afraid to push their limits in an unfamiliar environment. And unlike Burning Man, when you get too hot and exhausted to focus on the task at hand, you can simply jump into the water and go for a swim.

Pics up on my Floating Festival 2010 album on Picasaweb