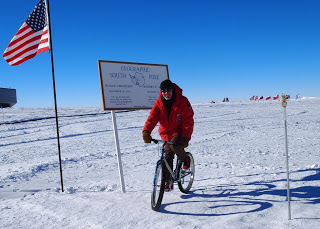 On Dec 14th, 1911, Roald Amundsen and his four countrymen became the first humans (probably the first macroscopic life forms, for that matter) to stand at the geographic south pole of the planet. They uneventfully planted a flag, pitched camp, and had a cuppa hot cocoa. To solemnly commemorate this occasion, Marco, Mark, Kevin, Katherine, Connie and I went biking around the world.

Well, sort of. We went out to take some commemorative photos, but Marco – fellow Palo Altan and ever the athletic overachiever, brought a bike out, so we took turns riding around on the sastrugi and trying not to generate fodder for accident reports. If we did, we had to hope that is wasn’t Mark or Connie who went down – they’re the entire medical team here at Pole.

But luck was with us, and we made it back with little more than frosty cheeks. More pictures over at http://picasaweb.google.com/david.cohn/20101214AnniversaryBike.