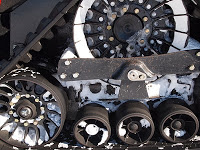 The traverse got in last night [okay, two nights ago, now that I’m posting], and I didn’t even notice. First clue should’ve been a bunch of new guys with big beards roaming the hallway, looking as though the idea of “being indoors” was a relatively novel thing. You’ll remember the various postings from the road I forwarded from the traverse?

Well, they’ve been much anticipated. For the past few weeks, I kept having conversations that ended in “You’ll have to ask Storm about that when he gets here. He knows more about that than anyone, but he’s still out on the traverse.” Well, I finally got to meet him – he was just as laid back and laconic in person as legend made him out to be. And yeah, I’d been hearing so much about him that “legend” isn’t an understatement.

For example, he was the one driving the Challenger on a log drag last summer when it broke through the ice crust and plummeted into an apparently uncharted part of Old Pole. The tractor went in tail-first, dropped something like 30 feet into the hole, then was followed – Murphy-and-the-bricks-like – by the massive chain and log he’d been dragging.

The way Megan tells the story, not even that was enough to perturb Storm. He keyed his radio to tell her and Froggy that he was upside down somewhere under the ice with a smashed cab, and that the hole appeared to be caving in. So he, um, might need some assistance.

When I asked him about the incident, he smiled and nodded. “Ahup, that’s right. I was the last person in Old Pole.”

Lots of other colorful and fun folks on the traverse, too. Guy, Owen and Mark, I haven’t had as much time to talk with. Did get some “floor time” talking with Jen, though, who reminded me that we had met – briefly – in McMurdo. Big continent, small world.

There’s a small window alcove in the 2nd floor hallway where I frequently perch to read. Sitting in the window is a fine place to read, but not to talk. So when people catch me there and stop to chat, I invariably find myself sitting down on the floor against the wall there to continue the conversation. This apparently amuses passersby. Up to now, I thought it was a purely Pablo-centric phenomenon here at Pole. But coming out of the galley yesterday, I came across Tina (Comms) and Jen (traverse driver) chatting, sitting on the floor up against the wall where I usually sit. So it seemed entirely natural to plonk myself down and join in the conversation. Learned a lot about what a day on the traverse is like: insanely boring. Like driving all day at 6 mph down the road in the most featureless part of Kansas. But there’s no road. And you’re doing it every day, non-stop, for a month. Except for when you’re hunkered down in your tiny “living pod” against the whiteout conditions pinning you in place on a glacier for a week at a time.

Anyhow. The Traverse is here. They’ve spent the past month dragging 75,000 gallons of fuel out to us, across the Ross Ice Shelf, up the Beardmore Glacier, through what Megan calls “Sastrugi National Forest” (a crazy stretch of enormous trailer-destroying rock-hard moguls), and finally over the “Snow Swamp” (shades of Princess Bride?) into the station. In fact, they had to do parts of the Ross Shelf twice because of mechanical problems. Left the fuel out at a depot and returned to McMurdo for repairs. But they’re here, and very glad to have indoor plumbing and room to stretch their legs without putting on ECW. In a couple of days, they’re going to continue on 400 miles further into the interior to drop off more fuel for AGAP and haul trash back in return.

2 responses to “The Traverse!”