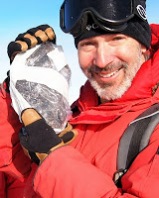 The G-057 team team pulled back into Station a couple of days ago after five weeks living in field camps that make my Jamesway look like the Ritz. Back in December, I’d told Melissa how envious I was of her upcoming adventure, looking for meteorites out on the La Paz and Patuxtent Glaciers. Yesterday, seeing her stagger into the laundry room with a look in her eyes reminiscent of supplicants at the Temple, I’m not so sure anymore. Five weeks on an Antarctic glacier in an uninsulated nylon tent apparently give you a whole new appreciation of indoor plumbing, and I’m not convinced I want to earn that appreciation.

But as glad as Melissa, Serena, Steven and John were to be back, they were excited as all hell to have gone. In those five weeks they found over three hundred meteorites, including one as big as my head (and yes, Andy, much more dense).

I’d always wondered why scientists went to Antarctica to look for meteorites. Was there something about orbital physics that made the rocks end up at the bottom of the planet? Turns out, the answer is much simpler than that. You know the story of the drunk looking for his keys under the lamp post? (“It’s where the light is!”) – this is the same thing.There are meteorites scattered pretty uniformly over the planet, but on most of the surface of the earth, they’re mixed in with other rocks. But if you see a rock out on the surface of the La Paz glacier, you know it came from space.

So you and your three colleagues spend 8-10 hours a day driving your snowmobiles veeeery slowly over the unbroken blue ice of the glacier in formation, looking for any little chip or sliver of something on the ground that doesn’t look like ice. If you’re lucky, you find something, possibly just a fleck of rock, every couple of hours. Still sound glamorous?

Actually, I lied a bit about the rocks being distributed uniformly over the surface of the earth. Because of the way the glaciers move, some spots are better than others. The two-mile thick ice sheet here at the Pole is slowly sliding downhill towards the Central Trans-Antarctic Mountain (CTAM) Range. When it gets there, it gets tucked upwards; some oozes through gaps in the range and becomes the great glaciers and ice rivers: the Beardmore, Leverette, Shackleton, etc. But a lot of it just sublimates – comes to the surface and evaporates, leaving behind whatever was embedded in it. Which includes all the space rocks that hit that ice over the past 100,000 years. These spots are gold mines and, as I understand it, checking whether La Paz was one of them was one of the goals of the G-057 expedition. It turned out to be “just okay” from a quantity perspective, but the head-sized space rock was a real find.

I got to talk with Melissa a bit about the rocks themselves while she luxuriated in some quality time with the washing machine. She’s a senior scientist with the Planetary Sciences Institute, specializing in Martian geology (“It’s not the ‘Red’ Planet, it’s ochre!”). So why is she freezing her posterior off at the South Pole? Because, while most (~99%) of meteorites come from wayward bits of asteroid belt, a tiny fraction come from the moon, or other planetary bodies. Some big old piece of space rock hits the surface of Mars and blasts a huge crater. Some tiny fraction of the debris from that blast may achieve escape velocity and drift off into space. Some tiny fraction of that debris may get captured by Earth’s gravity, and some tiny fraction of that may survive re-entry to hit – if Melissa’s lucky enough – the same particular chunk of glacier that she and her friends happen to be traversing.

Anyhow. I was sitting with Serena and Melissa over lunch today (“What was really annoying was when my peanut butter sandwich froze, and I had to scrape bits of it off with my teeth to try and get enough calories in” [Serena does an Ice-Age Scrat-like impression of frantically gnawing on a brick – she’s a NASA astronaut, so she’s got some pretty mad survival skills]). Melissa mentioned that they were offloading a bunch of stuff this afternoon, and offered that she might be able to convince John to pull the rocks out for a bit. The cache couldn’t come into Station – they had to stay frozen until they get to NASA for careful thawing and analysis. But if we were able to come by the Otter Pit (where they park the DeHavilland Otters; this isn’t Sea World) around 3 this afternoon, we just might be able to handle some genuine 4 billion year-old space junk. But don’t advertise it, okay?

Yeah, I was there at 3:00 on the dot. Along with half the Station. Great fun.

[No, M and friends don’t get to keep any of the rocks themselves. They don’t even get to touch them – glove contamination and all that. (NASA: “We’ve detected traces of wool oil on one of the trans-Lunar chondrites retrieved from the La Paz glacier.” National Enquirer: “Invasion of Space Sheep Imminent! What the government is hiding, and what you need to know now!”)

Every chip of rock they find gets shrinkwrapped and cataloged. After they’re analyzed back in the states, the rocks are headed for the Smithsonian, where they’ll be available for loan, free of charge, to any school that asks. With these folks, you’d sooner joke about stealing Christmas presents from orphans as you would joke about sneaking one of those rocks home for yourself. They take this veeeeery seriously.]