“There is a school of thought, a heresy from the madhouse of heresies in the ninth century, that says God is good and is in control of every individual thing that happens, every event, but that unfortunately, the devil controls the timing.”  -Norman Rush

You’re wondering why that comes to mind right now?

I’d blocked off this afternoon to edit films for SPIFF – the South Pole International Film Festival. Yes, really, we’ve had one at least for the last decade. Polies spend a week or two of interstitial time shooting some local footage, edit it in secret, and present the finished work to the whole station at a shindig on the last Saturday night in January. It’s a big thing.

For reasons that can best be explained as a combination of implied job description, weather in McMurdo, and an insufficient familiarity with the word “no”, I ended up as editor/compiler/producer of this year’s SPIFF.  It didn’t sound all that hard, though: people would send me their films, I’d tack them together, throw them on the galley computer, and hit “play” at 8:00 p.m. on Saturday night.

It was, um, more complicated than that. By Friday night, I was swearing with words I hadn’t used since… actually, I’m not sure I’d ever used those words before. And I made up some new ones when I ran out of vocabulary that felt sufficiently strong. Editing films, it turns out, is non-trivial. Compiling them is even more fun when you’ve got a bewildering variety of formats including Flash, AVI, Quicktime, WMV and Denubian Time-Warp Codex. Okay, I’m kidding about the Denubian TWC, but you get the idea.

But it was still going to be fine, since I had set pretty much all of Saturday aside for the final assembly (recall that Saturday is a work day here). But there were no planes were coming in, so no new folks to orient, screen and send on their way. Should have been a nice quiet day in which I could figure out how to string everything together.

You see where I’m going with this.

Instead, pretty much everything that used electrons and was the responsibility of the IT team took turns throwing in the towel (there’s a stronger metaphor we use down here, implying the need a change of sheets). The LMR radio system. A couple of our file servers. The cargo inventory system. The network. One of the powerplant computers. I was on the phone with one Polie, another on hold to explain that our sat link had failed, with a third standing at my desk clutching her dead computer, while Paddy waited to hear whether we’d managed to kickstart the cargo tracking system. Mark peered his head in to tell me that the color printer had just sucked in a dozen sheets at once and was making an ominous whining-screeching noise that didn’t sound healthy.

Gack.
Bill checked in to see how we were doing upstairs while he and the downstairs gang grappled with the radio failure. He saw my shell-shocked look and nodded understandingly.

“See? This is why rock stars take drugs.”

Somehow, somehow, we got it all sorted out. Mostly. Printer still needs a change of sheets, and may be permanently toast. At least until November, when we’ll next be able to get parts in. I cobbled together the myriad formats – Flash, Quicktime, AVI, WMV, and somehow got them to play well together. I shot brief transition clips and wove them into a playlist. I got it all loaded onto the galley computer, despite inexplicable hardware failures (honestly – how often do you have thumb drives flame out on you?)  We got the monitors and projector set. We even did a sound check. The galley windows were blacked out and people filled the seats in anticipation.

Then we plugged in the popcorn machine and the entire A/V stack went dark.

Mercifully, it only took 10 minutes for us to find the popped breaker, reboot everything and get the monitors online again.

Then Elissa handed me the mic and… we were on.

In short, it all worked. The sound system was underpowered, but films were funny. People laughed and hooted, cheered and “awwwwww”ed. It was good. An hour later, when I flipped on the lights, the galley erupted into a rumble of gratifying applause. We’d pulled it off

Not surprisingly, I’m completely wiped. There’s a party out at Summer Camp; three bands playing. I’ve been offered a slot at the end if I want to do a solo set, but I’m wiped. It’s my last Saturday night here – let me say that again: my last Saturday night here at the freaking South Freaking Pole (of the world), and I’m just too tired to be a part of the celebration. Man, do I need some sleep…

…but it didn’t happen. Made it out to Summer Camp and dropped my stuff off in J7. Hmmph. Gotta go at least peer into the Lounge, right?

The first band was just finishing up, and the crowd was milling in a comfortable Summer Camp vibe. Familiar faces in their standard stations – Eric and Russ manning the bar; Daniel perched over the mixing board, Joel, Molly, Sarah and Mike swirling around the confined dance space in the residual music. It was a good vibe, and it felt like where I wanted to be at the moment. A chance to lose myself in the noise and motion. Trudy thrust a bottle of gin at me, declaring “You haven’t been dtiingking neerly enuf!” She had streaks of glitter around her eyebrows that blinked iridescent when the disco ball reflections caught her face. She took a moment, watching me not quite know what to do with the bottle, then reached past and produced an empty glass and can of 7-Up. “Here, get started with this… Oh crap – I love this song! We’ve gotta all dance.” And we did.

We all danced as as we did before, as we always seem to do when Polies dance. Not with anyone in particular, not for any purpose – just rolling swinging, singing along in some Antarctic Dionysian frenzy. Because we’re at the bottom of the world. Because it’s a F*ing Harsh Continent out there. And because we love it, and because some of us won’t be coming back.

I finally made it back to J7 around 1:15, drop-dead exhausted, released, and only a little bit drunk. I’d flirted innocently yet shamelessly, ruined yet another pair of polar socks (floor’s too rubbery for dancing in shoes), and survived yet another evening for which I will forever be at a loss for words to describe. Ah well, you know what they say: it’s a harsh continent. 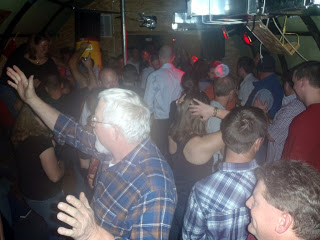 One response to “The Devil Controls the Timing”