The so, so, so belated answers to more Questions for Pablo at the Pole. Sorry, I’ve been way, way negligent in my duties here!

=============
“Being from Winnipeg Canada, I am familiar with cold. How do you measure appropriately – watts per square metre or equivalent temperature or minutes/seconds before exposed skin freezes or is there something more relevant?“

Hi Todd – sorry to be so long responding to your question. You posted this waaay back in November, if I recall.

Alas, we don’t use anything more sophisticated than a combination of standard temperature and (American) wind chill temp. Interesting to report that the idea of “wind chill” temperature was invented by my old hero Paul Siple, during his early Antarctic days. It’s gone through a lot of variation an refinement, but the basic idea is still the same: how fast does a (standardized) warm body cool down in this environment?

One of the things that’s always bothered me is that the standard measurement is effectively in, as you say, watts/m^2 per second, but the implicit variable is the starting temperature of the object; if it’s already at ambient temperature, it’s going to lose 0 watts/m^2 per second, and if it’s very hot, it’s going to lose a hecka lot of them. Granted, the objects we’re most concerned about generally hover around 98.6F, but there really ought to be another variable in that equation, shouldn’t there?

Note: at lunch today, I was sitting with Bill Coughran (no, a different Bill Coughran – this one’s our new site manager) talking about temp differences between different parts of the continent. He was telling me how excited he was back a few winterovers ago when the temp dropped to -111F. That’s the temperature at which C02 condenses out of the atmosphere. They were all scrambling around, trying to figure out whether they could find or grow some naturally-occurring CO2 crystals. Couldn’t, but it was one of the high points of the winter, I gather.

“Many of the world’s major religions were founded where it’s really darn hot. Desert, even. What would a religion or mythology founded at the South Pole be like?”

Uhhh – I love this question, but I don’t have a good answer for it. Sounds like something I should be discussing with winterovers, over a bottle of wine. Winterovers would have really good ideas about this.
————————————————————-

“Do they make snowmen down there?”
Pluto, Cupertino

Funny thing is that the snow is so cold, it doesn’t really stick together. Can’t even make a decent snowball for a snowball fight (though Christy and I managed a vague approximation of one by breaking off pieces of sastrugi and hurling the chunks at each other).

In place of ordinary snowmen, we’ve got an annual snow carving contest. A week or two after Thanksgiving, huge 8-10′ high blocks of compacted snow show up at the front of the station near the geographic pole. I don’t quite know where they come from or who brings them; snow elves maybe?

But Polies form up teams, claim blocks for their own, and get to work with hammers, chainsaws and whatever they can in order to turn their chosen uncarved block into an ephemeral masterpiece to be judged the weekend after New Years.

Or, at least that’s how I’ve been told it worked in the past. This year, Polies glancing out the galley windows one morning observed that one of the taller, narrower blocks had been carved overnight into a highly detailed set of male genitalia.

The result was a nightmare for station management – they were still reeling from last year’s “Jello” incident being brought up in Congress: “Y’all mean to tell us that the hard-earned tax dollahs of our good citizens are being frittered away by you so-called scientists lahk this?” Of course, there were strong opinions on all sides but the inevitable decision was that the sculpture would have to be bulldozed.

Yes, the video is out there on the web, as the unfortunate (and anonymous) driver backs up and repositions, trying to figure out the best way to “engage” the doomed sculpture.

After the “It’s a rocketship! No, it’s a mushroom!” incident, no one seemed to have much enthusiasm for the remaining blocks. Four ended up getting carved, somewhat, after the organizers extended the deadline, but the result was still just a shadow of the sculptures of former years.

“OK, you’ve done some great experiments with water. Time for fire! What I’m wondering is, if you have a candle, does the cold make it harder to light? Does the cold change the flame in any way? What about blowing it out? Does the wax melt oddly?”

Ah, Cymbre – how patient you’ve been! I’ve been meaning to do some of these experiments, but with the almost constant storm, it’s been rather hard to find a place outside that won’t snuff a candle in an instant. We’ve begun the early Feb temp drop, through (~avg -1.5 degrees per day), during which time the winds traditionally taper off. Will really really try to do at least some candle-based experiment before they put me on a Herc  home – stay tuned!

Hmm. Good question. I don’t think so. Crazy how quickly it’s moving, though, isn’t it? It isn’t even (technically) located in Antarctica any more – it’s out in the water about 100 miles off the coast towards India, and moving north in a hurry.

One of the surprising things that was just pointed out to me is that the magnetic poles don’t necessarily have to be exactly opposite each other – one can even stay put while the other wanders around. It all has to do with the flux and motion of our planet’s iron core. Crazy stuff, geophysics! 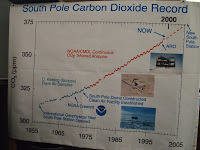 ————————————————————-
“Is it possible to see the impact of global warming in your environment? Do the scientists have any suggestions about active steps we can all take to help the penguins?”
Kitty, Wollishofen, Switzerland

From here, not directly. We don’t have any animals or landmass features that we could detect much change in. But the ARO folks have spent the past half century measuring CO2 and other atmospheric gasses. The trend (as you can see in the charts in http://picasaweb.google.com/david.cohn/20101206Aro) isn’t pretty.

There are some areas for hope, though. ARO also measures CFCs in the atmosphere – the long-lived and now-banned substances responsible for eating away the earth’s ozone layer. They’re seeing gradual but distinct decreases in the detected atmospheric CFCs since they were banned. It’s apparently too soon to tell whether the ozone layer is repairing itself, but it’s a a hopeful sign.

————————————————————-
“Do you have an amateur radio license yet? I heard some folks at the station there recently got theirs. Hams “prize” the ability to make contact with anyone in unique locations!”

Okay, here’s the crazy thing: down here, you don’t technically need one. The Antarctic treaty forbids signatories from recognizing territorial claims, so we’re not in the US and, strictly speaking, not subject to (most) US statutory or licensing requirements. Yeah, for the past three months I have not been (again, technically speaking) in any country whatsoever.

That’s not to say there’s no law. The US claims jurisdiction over its citizens even when they’re abroad, and of course the IRS wants its share of any money we earn when not subject to the tax code of a foreign power. The USAP also requires participants to abide by its program rules, and as far as operating heavy machinery and radio equipment go, the USAP’s rules hold sway. The rules, as I understand them (it’s okay to correct me here, Johan!) go something like this:

1. Don’t do anything on the air that will embarrass the NSF, USAP or its participants.

There used to be a fairly active Ham community down here – in fact, if you read Siple’s book (90 Degrees South – I keep telling people to read Siple), Ham was the only way the first winterovers could communicate with the world at large.

Bill, my supervisor here, tells how his predecessor Brent (hi Brent!) would infuriate Hams around the planet. As you mention, getting CQ’s from exotic locations is a big prize for Hams, but some of them are real sticklers for proper form. Apparently when Brent detected that he had one of these on the line, he’d start making up his own phonetic alphabet and phraseology, just to drive them mad. Instead of November-Papa-Xray (NPX, South Pole Station), for example, Brent might identify the call as coming from Noodles-Polar Bear-Xylophone or something. Bill couldn’t come up with precise examples, but recalls being able to detect sharp rises in blood pressure from halfway across the globe. (Brent – any chance you can add a comment here to clarify and enlighten?)

3 responses to “More Questions for Pablo at the Pole”