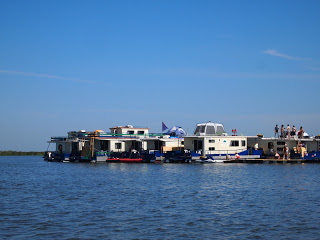 Gack. It’s now the fourth time I’ve tried to sit down and write about Ephemerisle, and it’s just not working. I mean, the “sitting down” part is easy, and I’ve even managed the “writing” part. Three pages worth. But it either comes out as carefully-poised descriptive dross (“Ephemerisle is an on-the-water analog of Burning Man – a four day floating festival of independent-minded makers and doers intent upon exploring the social, legal and technical challenges of building intentional communities on the open seas. And they’re not above having a wild party on the water to help figure it out.”) or self-indulgent impressionist fluff (“The hundred tiny cuts on my sunburnt hands stung in the splash of warm water as I craned my neck and slid a little further over the edge of the bobbing wooden platform – it was a good sting, though; I could almost reach the submerged bolts on the cleat I was trying to remove, and the slap of the water against my face and hands kept my mind on the single most important aspect of the task: if I let the pliers slip, there would be no retrieving them from the bottom, and no mercy from the rest of the improvised crew on this floating platform.”)

But I can’t figure out how to tell the Ephemerisle story – there are just too many little pieces. A single vignette, I could pick up, turn over in my (sunburnt) fingers and hold up to the sun, to see the light reflecting off it: the boys, scrambling boat to boat with whatever ballistic water devices they could scrounge, intent on soaking and getting soaked. The muffled ripples of a pair of kayaks, gliding through sinuous passages in the shallows of the reed forest along the edge of the Mandeville cut.Crazy thumping floor-to-ceiling technorave breaking out from False Profit (“the DJ boat”) at unpredictable intervals, with the resulting dance grooves blossoming from the other boats as matter-of-factly as one would open an umbrella in a cloudburst. Sitting on the floor by night, exchanging verses of Wadsworth, Frost, Rumi and Hafiz in an informal poetry slam on the floor of Numenor. Yes, all the boats had names and themes.

There was Memocracy, hosting microtalks on telepresence robotics for buried treasure (“It’s on federal land, so officially, I’m never going to find it”), careers in rocket science (“Fundamentally, space isn’t a place, it’s a velocity”), microexpressions (“Lie to me. Really”) and a hundred other improvised topics of local expertise. Tranquility – the “quiet please!” boat, Silver Bullet with its disco lights, mylar trim and late late night dancedancedancing. Then It(h)aka, The Mary Ellen Carter, Strawberry Neptune, Bayesian Conspiracy and others. We were out on the end, in “Breeder Reactor” – the family boat (Get it? “breeder”? We were the ones with kids… ah, it seemed funny at the time) . 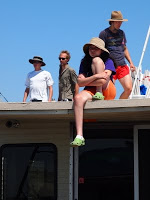 Folks showing up at all odd hours – I shuttled people from the Marina in a speedboat we’d rented for waterskiing. Got stories from everyone; where they came from, what brought them out to the float. The barge that broke down on the way; they paddled until dark, then Terry (or someone) towed them the rest of the way in with one of the patio boats. Rented houseboats, hand-engineered floating platforms, home made kayaks and ocean-going sailing ships. An enormous water slide lashed to the side of the flotilla.

For the first time, we had media on board – BBC and French TV both sent camera crews. Created some opportunities for that impromptu collective structural decision-making that Ephemerislanders love so much – who gets to decide what, if anything gets filmed? Consensus came quickly, factoring in the vital “dissent but commit” votes, and a few wedges of time were designated and announced as open for media filming. Of course, non-media types were taking pictures around the clock (check picasaweb and flickr for “ephemerisle 2011”). Me? I shot a bunch of pictures the first day, then decided to put the camera away and lose myself in the flow without worrying about getting dunked/soaked while distracted.

But where was I? Distracted, clearly.

Oh yeah – the tension of a million little vignettes dancing in my mind. Not being able to figure out which story to tell. Yeah. Still there. Jeff Greenwald says that when he returns from a trip, it takes him a while for the stories to come together. They roll around in his mind like a mental rock tumbler until, maybe six months or a year down the line, the rough bits have been knocked away, and the polished luster of the underlying gem is revealed. 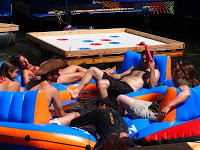 Maybe that’s what I need to do – just give it some time. Some time in December, as we lean over the warm fireplace banked against the deep snow of a Sierra winter outside, I’ll be able to reach into that rock tumbler in my head and pull out a memory of the summer past, of fire dancers silhouetted against the near-full moon, the sound of boys scrambling boat to boat, armed to the teeth as squirt gun guerillas spoiling for a fight, or the feel of warm delta water splashing against those sunburned hands.