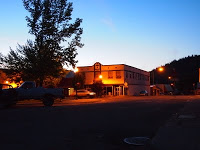 Wasn’t I just writing a couple of weeks ago about a lack of upcoming travel adventures? So sue me. I guess I’m not lacking so much for travels and little adventures as I am for neat little stories in which to encapsulate them.

But travels and little adventures there are aplenty. For example, yesterday about this time, I was westbound somewhere over the Sierra, headed for home in the Debonair with Devon and Jeremy on board. Mind you, in the moment I’d be able to nail it down much more specifically than “Somewhere over the Sierra”, but that precise location wasn’t that important at that precise time (Except that, at this precise moment, I’m somewhere exactly over the Mississippi River, looking down from 37,000 feet. The Washington DC trip I’d mentioned. But again, I’m getting ahead of myself.) 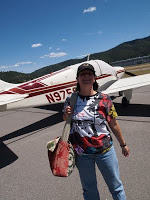 Anyhow. Having shipped Miranda off to England for a couple of weeks with the grandparents, Devon and I had precisely 38 hours of non-parenting time to ourselves before we were due up in Portola to pick Jem up from camp. We’d long since forgotten what grownups were supposed to do when unencumbered by their offspring, so after spending an evening watching “Star Trek 2: The Wrath of Khan” (don’t get me started), we found ourselves piling into in the plane and excursing (yes, that’s a word now) ourselves up to Quincy to visit my friend Linda from the Pole.

Now, all of you should remember Linda – she was the HR person at the station, and we shot all those goofy videos together: hot water vaporizing in mid-air, soap bubbles freezing, and yes, that you-really-had-to-be-there opener for the “2011 South Pole Film Festival”.

Well, when Linda’s not on the ice, she lives in the idyllic little mountain town of Quincy, CA. She’d been trying to find a chance to make it down to one of our musicmakings, and I’d been looking for excuses to come on up. Turns out that the pretty little airport in Quincy is just 40 miles west of the pretty little airport where we were supposed to pick Jem up the following morning, so I emailed Linda asking if we might invite ourselves up for the evening. And after a one-hour flight up over the snow-capped peaks of the western Sierra, there we were, spiraling down into Quincy, smack dab in the middle of the lush green Thompson Valley.

Linda came out to pick us up at the airport, gave us a quick tour of town, and brought us home for coffee and fresh-baked chocolate chip cookies with her housemate Meredith. Then off for a stroll down the Feather River to give the dogs a bit of exercise, and back for more cookies and conversation. 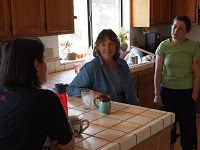 There are some people you can talk to like you’ve known them all your life, and Linda’s one of them. She and Devon had heard so much about each other during my stay at Pole that they were practically old friends before they ever met, but the three of us, sprawled around Linda’s living room, chatted about damned near everything for hours.

Eventually somebody looked up at the clock and we realized that it was time for dinner; L had made plans for us to join “the rest of the gang” for dinner, wine and music.

By “the rest of the gang”, she meant Quincy. As we sat outside in the courtyard tables between the wine bar and Mexican restaurant, we nibbled on chips, tacos and quesadillas, sipped tasty wines from Bob-knows-where, and listened to Johnny Walker and Greg belt out a blues groove on steel guitar and harmonica. Seems the whole town came and went as sat, professors at the junior college, old boyfriends and traveling companions. Linda introduced us to nearly everyone, and I couldn’t help but smile in wonder as yet another stranger shook my hand and said “So you’re Pablo – damned glad to finally meet you!”

To seal my apparent infamy, Linda had insisted that we bring along her guitar, and informed the evening’s entertainers that I’d be doing a short set during their break. Went… better that could be feared, given the lead time (for those keeping track: “A Thousand Times ‘No’”, “A Modest Proposal” and “Please Don’t Bury Me” – plenty of applause, but I kept my distance from the tip jar).

As the sun sank below the horizon, Linda declared it time to repair to the house for some homebaked rhubarb cobblers.

And she wasn’t even mostly joking.

A quiet night later, spent under the cotton comforter in the guest bedroom, and Devon and I were ready to fetch Jeremy. Rhubarb jam (“You are taking a jar with you.”), scones, blueberries and yoghurt, then Linda dropped us back off at the airport for the short hop to Portola, one valley over the hills to the east.

Leaving Quincy behind and below us, I reflected on my ongoing love of small towns. To be fair, I’ve never actually lived in one for any real length of time – not since I left Hanover way back when – but they’ve always struck something in me, a feeling that resonates.  A place where you can smile at strangers and say “hello”, without evoking What-does-that-man-want-from-me suspicion. A longing for that automatic sense of community?  A smaller world where, of course there are awful people and nutcases to put up with, but they’re your awful people and nutcases. And yes, I’d probably go stir crazy before long. Get that itch to travel, if only a few hours drive to go see a show In The City and all. But that’s not so bad, is it? More musings later. And regardless, we’re not moving anywhere until all the kids are graduated and out of the house – that’s another story.

[Speaking of “other stories”, is there anything so much fun as a kid getting picked up from camp? Wanting to show us the wood carving, and his arrow and his bunk and his trout and and and… all in a single breath?

Eventually, we located all the luggage (including the frozen trout) stuffed it in the back of the van designated to shuttle us back to the airport. Four other boys – cousins Eli and Zach, friends Henry and Cheddar – were also tracked down and loaded up as well; their parents had flown up and landed after us, and were waiting for them where we’d left our plane. Strange sense of “what’s ordinary” these boys are going to grow up with: Doesn’t everybody’s parents pick them up from camp in a private plane? Heh.

Flight back was pretty and uneventful: south to Sierraville, then up over the pointy stuff at its narrowest, and a downhill run home to Palo Alto. No real adventure story to tell of it – just another day for the Cohns, I guess. 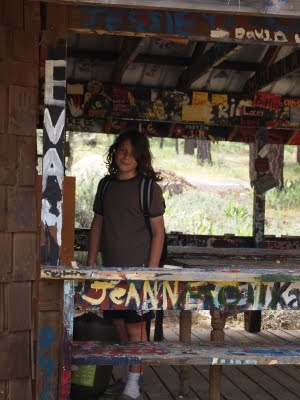