The story about Chuck Yeager isn’t as good as I’ve made it sound, of course, but that’s going to have to wait. I’m on the road again, and will try to keep my nose in the present, rather than digging through the dusty trove of Stories Not Yet Told.

I’m not saying that the dusty trove isn’t a better place to look – Jeff Greenwald says he has to let a story settle in his mind, roll around in his pocket for a year or so before it’s become polished and familiar enough to hold at arm’s length and tell. It certainly feels easier that way. The mind is like a “bag of holding” (yeah, I used to play D&D way back when it was all pencils, graph paper and Volume 2, before they had… no, wait, I’m not supposed to be doing the ‘curmudgeon’ thing until much later on, am I?). But it seems you can always reach in, Dylan Thomas-like on Christmas morning, and pull out wonderful memories you’d long forgotten you were carrying. 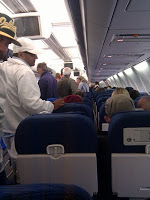 This time, I’m northbound again (pauses – wonders – how many of these missives have I begun with “Northbound”?). Just for a day and a half, to get a day of work in up at the Seattle office and kick up the dust of some old memories with some old friends. There’s that “memories” thing again – I’m sure by the time I’m southbound tomorrow, I’ll be glowing with all sorts of rekindled recollections. But that’s later – for now, I’m just northbound.

To be clear, I’m northbound in Row 34D of a pressurized metal tube getting blasted through the sky six miles up at not too much less than the speed of sound – a technological miracle that would have stunned Orville and Wilber a hundred years ago. Leonardo, half a millennium back, would just nod his head of course – yeah, he figured something like that – but the actual line of engineering from Kitty Hawk to here? Stunning.

Not that my traveling companions get much encouragement to consider the miracle of flight – like me, they’ve been herded, berated, searched and intimidated through the security line, patronized and told to sit down, strap in and let the flight attendant know if we need another drink, and recommended to close the window shade (looking out to the world – the world, I tell you!) so that their seatmates can better watch the sitcom and car insurance ads on the in-flight TV screens. Leonardo didn’t see that one coming. That whole “Once you have tasted flight…” thing? Sorry Leo. The big complaint I heard on my way back from DC last month was that they were charging for in-flight wifi. No, don’t think about it; just too depressing.

Anyhow – here I am. No real stories to tell at the moment, but they’ll come – they’ll come.