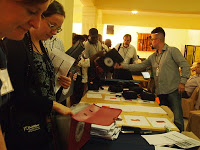 Friday night, and we’re ready. As ready as we’re going to be. Davor, Mariusz, Susan, Tom and the rest have given us all the preparation they can cram into two days. We file through TCC local headquarters and pick up the last of our gear. Badges, sat phone and netbook. papers, papers papers documenting our status as international observers. First aid kits and mosquito netting. Spare gear – flashlights, ponchos, soap and shampoo. Then there’s nothing left to do but step out into the night, pack up, and get as much sleep as we can before tomorrow’s dawn departure.

Impressions: indifferent rain spattering dark wet cobblestones leading down the hill. The street is lit by anonymous headlights from yet another convoy of white SUVs snaking through the barricades in front of the American Embassy. Static on the radio, a badly-tuned station broadcasting the rally downtown – if you focus on it, you can make out the sounds of the speaker calling out to the crowd; rhetorical questions, a thundering response, like the ocean heard through a tube-radio sea shell. Footsteps on hard marble, the sound of duffles dragged up the stairs to our respective rooms for the night. Hugs and awkward envoies, signing off until we see each other again on Wednesday, when this is all over. 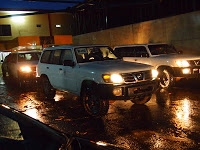 Tonight is Kol Nidre, the evening of Judaism’s most solemn holy day. I had misgivings about coming here, now. About skipping The Day. There’s a rabbinic saying about how the study of Torah (the Hebrew Bible) is the highest virtue, because it leads the student to all other virtues. But what, a Jew might ask, is the point of all these virtues? We’re taught to ask; asking questions, wrestling with the questions, and probing, always probing the answers is so deeply woven into our culture that it’s the given name of our people: Yisra-El, the “God wrestler”.

So then, why? There’s another Jewish concept in our tradition – Tikkun Olam: “healing” or “repairing” the earth. I could be wrong, but as best as I can tell, it doesn’t rely on a theological loop – it’s grounded, literally grounded in the idea of fixing the ills that plague our planet as an end to itself.

There’s an old joke about Jeb, the old West Texan who hears on the radio that a flood’s coming (you’ve heard this, right?). His neighbors come by and say “We’re heading for higher ground, Jeb, come along with us!” Jeb says “No, no, God will take care of me.” Storm clouds begin pouring rain, and a State Trooper braves his way to Jeb’s door. “Come with me, sir, we’ve got to get you out of here!” Jeb refuses – he’s been a devout man all his life, and is sure God will take care of him. The waters rise, and as Jeb sits on his roof, a National Guard helicopter swoops out of the torrential storm. “Grab the rope, sir! Grab the rope!” Jeb waves them off. Well, as you might guess, it’s not long before Jeb is standing there in front of God, mad as hell: “I prayed to you every day of my life! Went to schul, kept kosher, the whole nine yards! I thought I could count on you to save me – why did you let me down?!?” God rolls his eyes. “Listen Jeb: I sent your neighbors. I sent the State Trooper. I even sent a helicopter. What do you want, I should use Western Union?”

Yes, groan. But this, I think, is where my life intersects with Tikkun Olam. The rabbis tell us that study is good. But, they clarify, it’s good because it *leads* to all other virtues. If it doesn’t lead anywhere, then what’s the point? Liberia’s seen an awful, awful, unspeakable war. They’ve pulled themselves together, for peace and for democracy, in ways few believed possible. Helping ensure that this election goes smoothly and peacefully is crucial. For this country, and for West Africa. I’m here as a one of a few dozen election monitors with the Carter Center, part of a joint international observation team. A year ago, I never would have imagined myself here, at a time like this. But looking at the situation out there, it’s pretty clear: somebody’s got to skip schul this week and go help talk Jeb down from that damned roof. If not now, when?

[I’ll try to check in, albeit briefly, from the road over the next few days. Hatimah tovah, everybody]