[Again, a reminder: these posts are all one week old, and I’m putting them up in sequence, roughly corresponding to when they were written, to give a feel for my time in Liberia as it happened.]

Monday: visited more polling places, talked to Liberians on the street, er, dirt paths, and tried to get a feel for the mood. It was good, really – people were excited about the election. They wanted their candidate to win, but really, it was the election itself that was the important thing. Makes me feel good.

We headed down the twisted dirt road out to the Guinean border, five minutes from Alvino, to talk with the guards at the border station and get their feeling for the situation. One of the “worst case” scenarios we’d been briefed on back in Monrovia was cross-border violence, guns and men coming across the bridge from Guinea if things got bad after the election. Yeah, sunshine and ponies, I know. Guards here weren’t worried though – said that they were sealing the border this evening as a precaution, but the vibe they’d been getting was fine. Oh, and while we were there, would we like to walk across the bridge ourselves? Yeah, it was fine. 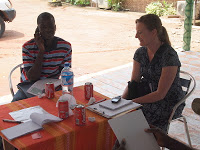 Still, I’d be lying if I said I wasn’t nervous. Nimba is constantly pointed to as the powder keg of the region. If violence breaks out, this is where it’ll start. Consensus is that there’s little chance of any craziness until tabulated results are announced a couple of days from now, and by then we’re scheduled to be long gone. But one of our “local sources” enumerated the ways things could go wrong in a hurry. Some of them seemed trivial: media-announced tallies being even a few votes off from the official numbers, for example. Nimba County is full of ex-combatants and ex-generals – men with guns and men with organizations that can mobilize them quickly if they felt disgruntled.

Susan asked if there were any hot spots particularly close to Ganta. He looked like he was trying to find a nice way to say it: Ganta is a hot spot.

In parting, he offered us a word of wisdom: “You’ve got the UNMIL hotline, right? Just remember that, when you’re reporting violence to UNMIL, make sure you’re not visible. Otherwise the violence will reach you before UNMIL does.” Criminy.