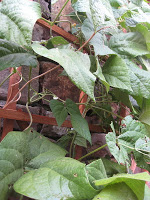 Really. Our endless summer reluctantly petering out as the rains finally came. Amazing how late it’s stayed warm – played havoc with the garden, I can tell you. The first pumpkin of the summer went bad and rotted in place; couple of months ago I turned its dried, leathery remains under the soil with a trowel just to have it out of the way. Now we’ve got new pumpkins coming up from the seeds. It’s November, folks – November. The green beans, too – the original vines paid their last respects some time in September. Jeremy and I pulled what we could of the dried husks and shelled them; got a quart or two that we’ll use once winter sets in. If we remember, of course. But of the beans that fell – you can’t pick and shell beans without at least a few going astray – a dozen seem to have mistaken our tardy autumn for an early spring, and gotten a head start. They’re about five feet tall by now, and I pulled a handful of fresh beans off the new vines this morning. November, I tell you. 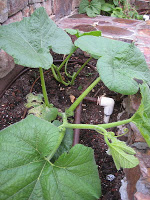 The jalapenos and cukes have been more reasonable, at least. We’d never had any luck growing peppers before, so I was a bit surprised when this one thrived. Still thriving, for that matter. Has given us a couple dozen pods at least. Thing is, it’s given me pause to realize that I don’t actually have any recipes for jalapenos, so they’ve ripened, red, crinkly and hot as all get-out on the bush. Really crazy hot. I’m used to those little slices of canned jalapenos that you find in Mexican restaurants, and believe me – this is a whole different world.

The cucumbers. One of the few vegetables that our kids will reliably eat, so they’ve been wonderful companions in our garden, if a little overenthusiastic. Couple of months ago, one of the vines snaked its way over to the adjacent cage of Romas and snuck out the back. I’d gone up on the wall to get at some hard-to-reach tomatoes and found myself confronted with a posse of four or five enormous feral cukes hiding on the far side. Managed to rehabilitate one of them, if I recall, but the others had to be put down (resisting the temptation here to claim that we split one of the others to construct a dugout canoe). 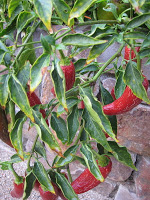 Yes, it’s been a good summer for the garden. But judging from the forecast, summer’s just looked at her watch and done a very hurried look-at-the-time-I-must-be-going. Temperatures are supposed to head south over the next few days, and our little eager beaver beans and pumpkins are going to get the surprise of their brief and tragic lives. Ah well.

Speaking of beavers, we’ve also had the company of a raccoon from time to time over the past couple of weeks. No, we haven’t seen him, but he’s taken to stopping by our yard and rolling up the lawn to look for grubs underneath. Really efficient about it – couple of times a week, I need to go out back and roll everything back into place.. Wouldn’t be so bad except that he’s haphazard about it, and I find myself playing jigsaw puzzlemaster, rotating and arranging these irregular square-yard-sized chunks of turf, trying to figure out where all the pieces go. It could be worse – it could be much worse.

So that’s the news from the west coast equivalent of Lake Wobegon. But it’s late, and tomorrow’s going to be a long day. Outside, it sounds like the rain’s moving in again. It’s a nice, peaceful, quiet sound.