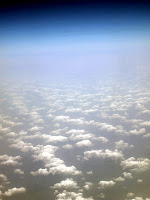 Approaching the coast of Dakar, the ambien haze lifts enough to let me sit up and look around. I’ve woken early, and will still be under the sway of Mephistopheles Morpheus for another hour or two. But I’ve slept through the too-short transatlantic night and want to see landfall. My hands – those of a sleepwalker – stumble in the uneven darkness of the cabin. Outside it is broad morning, but in here, in Plato’s cave, we few who move do so by light of a small luminescent screen, shuffling down the aisles toward the bathrooms, or conversing in hushed voices with our neighbors.

I huddle my black fleece over my head as a shield and lean forward, inching the porthole open an inch at a time. Outside, beyond the blinding brightness there is no land – only sky and a flat sea of cloud below us.

Years ago – me and Devon on our first trip together; Africa too, but Kenya that time, with a layover in Paris on the way. Somehow we’d been told of a restaurant near Montmartre, called “Paris Dakar” – after the eponymous race, I presume. We found it, and I remember us sitting outside, though it would have been December – so scratch that memory – and eating mango and coconut ice cream out of coconut shells.

And now we’re past Dakar, lost under the cloudscape below – somewhere over Senegal, over Guinea, Sierra Leone. Apparently (that word is emerging more often than I would have suspected in this narrative so far) – apparently we’re not going directly to Lagos after all. This morning. The best explanation I’ve gotten is that the air conditioning is out at the Lagos Sheraton, where the Atlanta-based Delta crews are scheduled to stay. So a plan has been hatched wherein we land at Accra first and swap out our Altantan crew in favor of a Nigerian one that, presumably, has its own local accommodations.

I crack the window shade up a notch, imposing a sort of artificial sunrise on my companions. It is 10:15 local time, and undeniably broad daylight outside. The light also helps me – helps me chase away the dark recesses of a drug-induced sleep, and peel away the half-remembered dreams that lay over my senses like painted gauze – clouding and confusing them.

We’re over Guinea now, if my geography serves right,, with an hour and some change before Accra. There’s land, of sorts, visibile now. Flat gray-brown. Could be desert sand – could be west Texas for all my eyes can tell. Onboard moving map isn’t much help.

[Ob Advertisement: flight itself has been fine. Delta’s “Comfort Plus” ($120/leg for overseas, $69/leg domestic) hits the sweet spot. Just enough more legroom and recline so you can actually sleep without cricking your neck, and the seats have underseat power plugs, so you don’t have lug around your heavy external battery packs.]

On the ground in Accra now, waiting for the replacement crew to take us to Lagos. Doors are open, giving us our first real breaths of African air. They appear to have at least some kind of air conditioning at work though, as it feels cool and fresh, in stark contrast to the compressed bits of stratosphere we’ve been breathing for the last 10 hours.

Most passengers seem to be enjoying the chance use this interlude to stretch their legs in the aisles and chat up the nearest pretty girl. But a couple up front – locals, by the look of it – are berating the purser for his inability to transport the plane to Lagos by solitary willpower. Flight attendant comes up from aft and activates her charms to defuse the conflict.

In theory, we’ll be on our way in 10-15 minutes. I’ll get met at the airport in Lagos, shuffled to the hotel, or the conference room, or restaurant – wherever. Then, get shaved, cleaned up, and go in search of bandwidth to post.

Airborne again, along the coast, Togo and Benin out the side of the plane. We’re flying lower now, with clouds looming up and above us. They take on Macys Carnival shapes – sea monsters and gorillas waving and transforming as they blossom in the air.

Below, the land is brown. Brown featureless dust. Even the sea looks dusty from here. Fifteen minutes to Lagos.

3 responses to “Africa, from Above”