The first thing you notice is the heat. Crimfickeny, it’s hot here. Official airport temp is somewhere over 100F, and stepping out of the airstairs and down onto the pavement is a descent into a very large airport-shaped pizza oven. The air sears your skin, and the sun, directly overhead, comes down on the black pavement like a keep-warm lamp from hell.

But, as they say, it’s a dry heat. Welcome to Tamale.

Strange thing is, the town feels approachable. Ken, our local contact here, drives us through, bouncing over dirt streets in his old cracked windscreen beater, windows rolled down as the air swirls with sounds – goats running through traffic, and market ladies with baskets of impossibly-colored fabrics piled impossibly high on their heads.

We park and make our way through alleyways and side streets – hidden doors in a weathered stone wall opening into marketplaces of chickens and women in swirling nomad scarves, the clang of tinsmiths and the smell of an open forge. The earth is red clay, but the dust, the dust is everywhere. They say it blows in from the Sahara to the north. I realize I’ve never been this close to the Sahara – Abu Ziblim says we can reach it in a day’s drive from here, and the idea simmers in my subconscious. 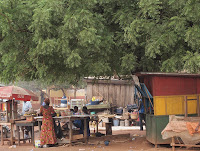 Eyes behind a fantastical scarf meet mine briefly then look down; I don’t allow myself to stare, and flit to the water seller, then motorbikes, then the girl chasing her brother through the stalls. My world tumbles into an impressionist’s jigsaw puzzle thrown into the air – a collage of sights, sounds and smells unfolding like fireworks everywhere I turn. Paul Simon lyrics course through my head, narrating with better words than I could possibly find for myself:

“A man walks down the street,
It’s a street in a strange world
Maybe it’s the Third World, maybe its his first time around
He doesn’t speak the language,
He holds no currency,
He is a foreign man, he is surrounded by the sound, sound
Cattle in the marketplace,
Scatterlings and orphanages,
He looks around, around,
He sees angels in the architecture,
Spinning in infinity,
He says, Amen and Hallelujah…”

And still, the hot sun beats down.