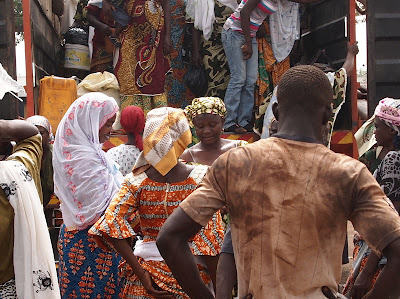 Airborne, westbound, for a long, long night. This morning seems so far away – no surprise there, I guess. Hard to link the goats-running-dirtroad-crazy-noise-and-heat marketplace of this morning with Seat 17A in Delta’s “Comfort Plus” seating. Africa below and behind me, the memories already slipping away like a dream.

But what a dream it was – the people, the sights, the sounds. Have I mentioned the people? Inspiration everywhere. Flight down from Tamale ran into a little turbulence, and I made a first pass trying to calm the Ghanaian women in the seats across the aisle. They didn’t need a word of it: their last flight had been hit by lightning and thrown around so much that the overhead baggage bins had popped, and luggage had been flying through the cabin like rocks in a tumbler. No, they weren’t worried about a little turbulence.
Only white folks on the flight other than me were a young woman moving with a casual ease suggesting she’d been living here a while, and a Sean Connery-esque older gentleman who turned out to be her father. I’m naturally curious, so I chatted them up. Also, he had a three-foot carpenter’s level poking out the top of his bag, and that just begged for questions.
According to her father, Danielle had fallen in love with Ghana years ago was now a one-woman NGO doing rural agriculture work somewhere near Navrongo, I think, north and east near the border of Burkina. They’d had a rush job to finish building a grain silo in time for some visiting dignitary deadline, and her dad offered to come lend a hand. Girl makes her dad proud that way, he said, and there was no way he was going to let her down. The level? Oh – he’d been told they were in short supply on the project, so he brought his own.
Very few white folks up north at all. Saw one at the market this morning, and two on a motorbike yesterday, but other than that, we were a rarity.
Anyhow. (I realize that I make abrupt transitions a lot with “anyhow”, where I observe that I’ve followed some narrative thread down as far as it’s going to go, and wish I had some more eloquent verbal device for making the jump. Maybe, speaking of Sean Connery, a Man-Who-Would-Be-King style “Selah…”)
As I was saying: Anyhow. Afternoon and a cab ride found me camped back at lobby of the Movenpick, blissfully soaking up the ample air conditioning and free wifi. My skin was still flecked with salt and dried sweat from the morning, but I couldn’t bring myself to do the reasonable thing and ask if they’d give me a rate for using a room just for a couple of hours to clean up and nap.

Still, there I was, in Accra, with an afternoon to kill. It had been bothering me that I’d not yet made it to the beach this trip, so I stashed my carry-on with Richard, the Movenpick’s ever-helpful concierge, and hopped a cab to Labadi. I mean, getting ready to hop on board a 16-hour flight in my only remaining clean pair of socks, pants and shoes – what better thing could there be but to get myself absolutely caked with seawater and sand? Yeah, it seemed like a good idea at the time. 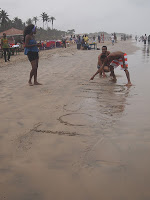 Really, though – it was. Three cedi (about two dollars) paid to the woman at the window lets you down the narrow concrete walkway to a dirt parking lot ringed by trinket shops, then through another passage out onto the beach. Surfside restaurants have tables and chairs laid out all the way to the high tide mark, and jewelry hawkers prowl the sands, latching on to anyone who’s careless to make eye contact. Again, I’m one of very few white folks around, so I’m easy prey. Cigarette boys, and the young men renting ATVs and pony rides are less aggressive: “Hey mister – you want?” I shake my head and smile – they move on. 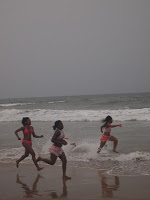 It is, above all else, a beach scene. Kids chasing each other through the surf, young men hamming it up with each other, strutting goodnaturedly for the attention of passing women. Fathers staggering into the surf with the weight of three or four offspring riding Thidwick-style on their head and shoulders.

And the waves. The water is surprisingly warm, so I hike my travel pants up, tie my shoes together and throw them over my shoulder. It feels right, strolling along at dusk, just leaving footprints in the wet sand. I manage to shake off the hawkers – all but Kofi and Nahya- with a simple declaration that their beads/paintings/bracelets/bowls are lovely, but I’m not buying anything tonight except dinner. They all want to know your name, to welcome you to Ghana, to be your friend and teach you a couple of Twi phrases before launching into the painfully stereotyped “So, maybe you want to bring back good memories of Ghana…” pitch. Yeah, thanks, but I’m not buying anything tonight except dinner. Dahde (or was that “Daddy”?) interrogates me on what kind of dinner I want to buy, and promises he’ll take me to the best place on the beach for it. Oh god – I’ve already ditched him and his maybe-a-pretty-hat-for-your-wife spiel twice; the prospect of him hovering over me while I eat ties knots in my stomach. I explain that I’m eating alone, thankyouverymuch, and he says no problem. But still wants to walk with me.

The hostess girls hawking their restaurants are less of an issue: they’re sort of tied to the territory where their tables are, so they won’t follow you; and besides, they’re selling something I want. (Dinner, folks, DINNER. Geez, what’s with you people?) 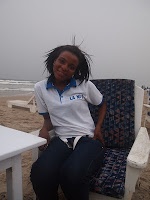 I settle into a beach chair at “No. 1” and order the this-may-be-a-mistake grilled fish and vegetables (I’ve been hauling around that dose of Cipro for ages now – maybe I’ll finally get a chance to use it…). Vida, who had flagged me down with more charm than salesmanship, takes my order up the beach, then comes back and plonks down on the chair across the table. She, like everyone else, wants to know where I’m from, how long I’ve been in Ghana, and how I like it. I realize that I can actually enjoy the conversation for once; she’s made her sale of c15 for the fish and another c1 for bottled water – she’s talking to me now because, well, there’s a white guy sitting at her tables and she’s curious.

Turns out she’s from a little north of Tamale. Came down about five years ago with her sister. I ask if the rest of her family’s still up there; she doesn’t know, and it doesn’t seem like she’s got much inclination to find out. Sounds like there was trouble, and she got out. Sister’s in Nigeria now, working… oh, she tells me, but it doesn’t stick. But Vida didn’t like the idea of going to Nigeria – too many people, too much pressure. She has a good job here, and she likes this town. I tell her it’s hard not to. And I mean it – I look forward to coming back.

She asks if I’ll call her when I come back. I say my wife would not approve, and she looks embarrassed – no, no, that’s not what she meant. I should bring my wife, show her Accra, show her Labadi. I promise I’ll think about it, and as a demonstration of good faith, flash her number into my phone.

The sun is down now, and ATV headlights light up the surf. I explain that I’ve got to go – got to catch a cab to the airport and head home. All the way home.

Halfway back, Kofi catches me again. He’s got bracelets now, and won’t let me go. Two for c10, really – real Akan symbols. For the kids. I remind him that I’m buying nothing but dinner, and that’s already been bought and eaten. Still, he won’t give up and insists that I’m not acting like his friend. I point out that everyone here who wants to be my friend seems to condition it on me giving them money. But he stays in my face as I walk.
He changes tactics goes for the hard line: for c10 he’ll just go away. And the bracelets will be a bonus. That, of course, was the point all along. But I point out that he doesn’t have to go away, because I’m going away – if he still insists that he’s my friend, can we shake and leave it amicable? Yes, yes, but why don’t I just buy his bracelets….? Kofi – listen, I’m about to get angry, and you don’t want to see me angry – you know how that plays out in the movies, right? I give up on talking and get on the phone to George, the cabbie who gave me the ride out. We both had fun as he spent the ride coaching my mangled pronunciation of common Twi phrases, and I look forward to the ride back, but he’s caught somewhere on the other side of town.
Kofi (yes, your name’s mud out here on the internets now, in case you care) is in my face again before I’m even off the phone, so I just climb into the first taxi I see, not bothering to negotiate before the cabbie fires up the engine. I know full well I’ll get slammed on the fare, but I’m just too pissed off at Kofi for ruining that last-night-in-Africa groove I’d come here to get.
Cabbie’s rolling before I get a chance to ask the fare; he quotes me four times the going rate, but quickly comes down as I make motions to climb out. At 1.5 times the rate I just give up – I’m tired of the hassle – and sit in silence the rest of the way back, nursing memories of what a long strange day it had been.
Looking at the photos now, as the plane climbs away. Hard to believe it was just this morning – from a dusty Tamale sidestreet to the raucous rhythm of Accra. And now it’s night, somewhere over Africa, but I feel strangely awake; why does everything before this feel like it was a dream? 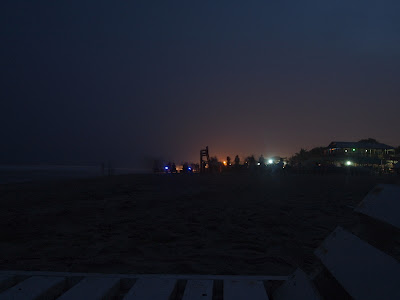