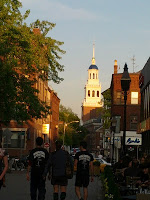 Ah, the unpredictable companions of air travel. The harried mother of the toddler two rows back, who appears to communicate her constant need for attention in ear-piercing screeches (the toddler, not the mother). My seatmate, who meticulously unfolded her ample carry-on baggage and began swabbing down every available surface with Windex Wipes (“Do you mind?” she asked, pointing to the shared armrest where my elbow lay.)

No complaints, mind you, just a small part of the adventure, two more passing cameos in the parade of humanity that makes up any trip.
I’m coming back from Cambridge exhausted – not from any strenuous effort; mostly just not sleeping enough. Spent my days working my butt off at the Google office in Kendall Square and my evenings visiting with old friends and wandering streets from my past.

There? That’s the Cantabrigia, where Devon and I had our first apartment. It was a glorious little one-bedroom place, with a tiny kitchen and a round living room in one of the corner turrets. Downstairs, next door was the “European” grocery store, enticing shelves stacked with fancy jams from England and Italian biscotti. We couldn’t afford it, of course, but occasionally we’d splurge and indulge ourselves in something small.
The food trucks at MIT (guess I shouldn’t be surprised that so many of my memories involve food). I dragged Justin out of the comfort of our cedar-plank-salmon-and-risotto Google café to seek them out. Twenty years ago, you could get a day’s worth of Pad Thai or General Tso’s Chicken in a styro shell for three bucks. Price is up to $5 nowadays, but it still tastes great. 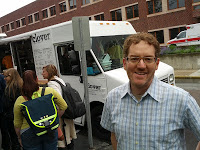 Back then, when I was a postdoc, Justin was still finishing grad school, and both of us were swirling in the orbit of a new field that had just been cracked wide open by the NIPS community. No one knew what the collision of Artificial Intelligence and statistics would produce – some folks were talking about artificial brains, others had set their sights lower, on things like face recognition, self-driving cars, or the “perfect game” of backgammon. Artificial Intelligence has always been about “what computers can’t do yet”, and back then it was stuff we now take for granted on the phones in our pockets. Looking back, you can see the seeds of almost everything Google does in work that came out of that community.
Sorry – losing the thread here. Justin and I both found our way to Google in the intervening years, but it was a chance to slip back down memory lane for a bit of ill-advised food. (To be fair, Justin showed the wisdom of his now-accumulated years by shifting from deep-fried goo to the “Eggplant and BBQ Seitan” truck).
Also took a nostalgic run along the Charles River path, out past the Boston Pops clamshell and back across the bridge, counting my slowing pace out in Smoots. Didn’t’ dare time myself – I remembered running those three miles in 22 minutes when I was younger, and didn’t want to take the shine off of such a gloriously sunny day. 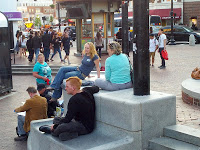 Evenings – Harvard Square, of course. As long as there’s a Square, there’ll be energetic kids finding new ways to fill it with music. Last night’s find was Melodeego, bringing pedal-powered pop rock to passers by. Great, great fun, with a crazy good vibe. During a break, they announced that they’ve got a Kickstarter going take their show on the road. We do live in the future, and it belongs to kids like this. 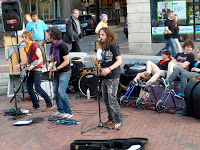 But I couldn’t bask in the music too long – I was meeting Tiron and Marie, housemates from my earliest days in Cambridge, for dinner. They’ve got two adorable-but-challenging boys who they’d left in the care of a sitter for the evening to get some “grown up time” at a neighbor’s book party. We sat and talked until way past all of our bedtimes, alternating between regressing back to our past adventures as twenty-something Cantabrigian kids and pondering the challenges of parenthood, with kids of our own.
The weight of passing time finally prevailed on our senses of responsibility – they had kids and a sitter to attend to and I had to be up the next morning at 5:30 (that’s 2:30 PDT!) to catch my flight. It was time to say goodbye, to make promises for the next visit, and time for one last stroll out into the night over cobblestones I used to call home.