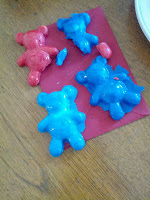 Arwyn is taking a break from coding up Minecraft machines to play “Extreme Patty Cake” with a friend who’s stopped by. As contender for the smartest and most adorable 10 year old on the planet, Carly’s daughter is a self-sustaining activity in and of herself.

Carly’s been on the couch all morning, intermittently coming up for air in bubbles of effervescence. Out of nowhere she pops upright like a jack-in-the-box: “The key thing is that we recalibrate the business model – instead of stalking elephants, we need to go after prairie dogs!” And then she’s out again, just like that.
A few minutes later, the cell phone in her lap rings – “Crap, I need to take this” (without opening her eyes), and for the next half hour, she’s on target as the hard-nosed industry expert. Then the phone drops to her lap again and she’s gone in a gentle slumber.
My job today is easy: be there when something needs to be fetched, and remind her to stay hydrated. We’ve already perfected the telepresence steer: I hold my phone ahead of me like a torch while I climb the stairs, and Carly, connected by video-chat directs me from couch: “Over on the right. The green blanket – yes, that’s the one.”

There’s been no nausea yet, which is a good sign – we’re halfway through the “red zone” for I-need-a-bucket-now behavior. It’s been so long since I’ve been a responsible adult, so I drop into my default behaviors: washing dishes, tidying up. Checking every 30 minutes whether she’s hungry again.

Arwyn is now trailing a posse of three other kids who’ve happened by the front door – I love this neighborhood – and has declared, to no one in particular, that she is going to start making candy on the stove. Carly barely stirs – “Just remember to clean up when you’re done, dear.” This clearly isn’t an unusual occurrence here. I slice apples for the candy makers and resume my puttering.
There are a few more phone calls, but the afternoon is winding down. Carly sits up slowly, introspective: “I feel…” she searches for the word a moment “fragile.” After registering the look of concern on my face, she continues “No, no, it’s okay – not broken. Just… fragile. Like I should take it easy.”
It’s hard to argue there. I mean, she’s just been poisoned. But her prognosis is excellent. I guess I should have mentioned this up front, before everyone spent too much time worrying. Carly’s dealing with HER2-positive breast cancer, a form of cancer for which a unique treatment exists: unlike most forms of cancer, which can only be combated by surgery and chemically carpet-bombing the body (or, as Carly says, beating the dog to get rid of the fleas), there exists a drug, Herceptin, that uniquely shuts down affected cells and directs the body’s immune system to destroy them. With the first round of chemo, Carly’s tumors went from 5 cm to gone. Just completely gone. But there are still plenty of pre-malignant cells around, so the oncologist recommended a second round, using the alternate therapy, which is where we are now, dosing up with traditional toxins derived from medieval mold and nerve gas.