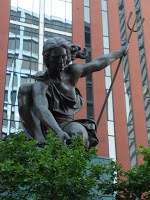 The challenge is to come up with one word that describes the place in question better than it describes any other place. “Quirky” fits Portland, but plenty of places are quirky. “Weird”? No, Austin’s been lobbying the “weird” market long enough to foil expectations (though between you and me Austin has invested too much in “hip” to really compete in the “weird” market).

If I were forced to choose, Portland would be… improbable. It was here, back in grad school, that we first stumbled upon the Coin Operated Psychic Fortune Teller and Church of Elvis, a bizarre little mechanical storefront into which you placed a coin and waited for the – literal – bells and whistles to run their course, after which a little “Past Life Regression” nametag would pop out. On the front it read “Hello, my name was Brenda” (or something of the like), and the back described your sorry past existence – the fact that you wore horizontal stripes, even though your friends said they made you look fat. Brian – improbably – turned out to have been Elvis in his past life. I think we had to buy him dinner at Trader Vics for that.

You could get married there too – for real. Or you could head down a few blocks and stop at Voodoo Donut and Wedding Chapel. I didn’t know about Voodoo Donut back then, but this spring when Paul told me the conference we were submitting our paper to was in Portland, it was the first thing out of his mouth: “Voodoo Donuts, Pablo – Voodoo Donuts.” I’ll admit that I’m a little intimidated. Apparently they got in trouble with the FDA over their Nyquil-glazed Vanilla Tums donut, but even the ones that don’t get them in trouble seem a little intimidating.

That’s for later, though. For now, Portland’s little improbabilities have been of a kinder, gentler nature. The streetcorner percussionist using lampposts, sidewalk and paint drums to put on a show. The pierced and leather-clad ukulele-toting teenage urchins, paired up in each other’s laps in all gender combinations, passing time along the sidewalk where the Third Street food trucks line up. The trucks themselves.

Yes – that’s the moment I want to focus on right now: the food trucks. The moment Devon and I, sitting on the lone bench amid all the trucks and urchins, looked up to read the sign for the “Salmon Fusion” truck. I had a plastic container of Bi Bim Bap from Korean BBQ, and Devon had some sort of chicken, rice and peanut sauce thing in her lap. But in front of us was the sign, offering all things salmon. Smoked salmon pita wrap. Smoked salmon pot pie. Salmon sushi. And there, under the dessert header: “Peppermint white chocolate salmon – $4.00”. Improbable. What else would you expect? Welcome to Portland.