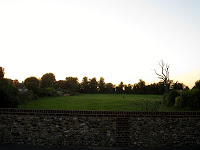 And did those feet in ancient time
Walk upon England’s mountains green?
And was the holy Lamb of God
On England’s pleasant pastures seen?

But I’m getting more than my recommended daily allowance of English countryside, winding around yet another roundabout on the way from Cambridge to Oxford, following the ostensibly straight-line route through Leighton Buzzard and Aylesbury.
On the map, it’s blindingly simple – you just take the A505 west and look for signs pointing to Oxford once you’re halfway there. But in practice, the designation “A505” appears to be the code designating a particularly sub-optimal solution for the classic “Traveling Salesman Problem”, attempting to traverse every roundabout and village center on the graph. If I didn’t have Jane with me, I’d never get to Oxford.
I’ve written about Jane before, right? That soothing voice on my phone’s GPS nav who plots my course and whispers turn directions into my ear.
“In 100 yards, enter the next roundabout. Take the third exit to Ickleston Road. (brief pause while I comply) In 200 yards, enter the next roundabout. Take the seventh exit to Biggleswade. (another brief pause) At the next roundabout, take the lesser of the arctangent of an interior angle on an isosceles triangle of circumference 17, and the annualized depreciation rate on the national debt of Sweden. Divide by 34 and solve for X. Please show your work.”
Okay, I’m exaggerating. A little. But the Google maps directions just from Duxford to Leighton Buzzard list 23 direction changes – all nominally on A505.
I should not, however, have doubted Jane. Sometime after we passed through the umpteenth little hamlet whose name looked like the unfortunate victim of a typographer’s poorly-timed sneeze, signs for Oxford began appearing on roundabout exits. Granted, about half of them were on exits other than the ones to which Jane was directing me, but I chose faith in technology. After all, when had it ever let me down?

Nonetheless, I did eventually make it to Oxford, and the Holywell Bed and Breakfast, my lodging for the night. I’d found them online; they had a room – not too expensive, and they were near the center of Oxford. I didn’t really ask much more than that. But this was a place with skeletons in the closet. Real ones. Or rather, it used to have them. When Carrie and Stuart, the owners of the 17th-century Tudor, opened up a back wall for some renovations, they found the remains of a Cavalier, apparently still with the sword that did him in. Carrie confided: “Sometimes I still see shadows when I come around a corner.”
The non-skeletony parts were gorgeous – old wood and twisting narrow staircases lined with carefully swirled plaster. There’s no air conditioning, of course, so on a hot night you have to choose between noise from the students below and making do with an electric fan, but if you want old Oxford authenticity, Holywell’s your spot. 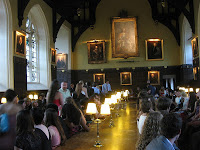 Speaking of “old”, Oxford knows how to do “old”. Miranda’s summer program held its end-of-school awards ceremony in the main hall at Oriel College. You want to feel transient and insignificant? Oxford is for you – Corpus Christi, where M was, is a Jonny-Come-Lately around, dating only from 1517, so they go to places like Oriel (1326) for a sense of august tradition.
But let me shift from historian to food critic and weather reporter:
Summer has hit Oxford belatedly, and is making up for lost time. Through the enormous picture window at the front of the Tull Street Kitchen I’m watching swarms of leggy young things drift by in ridiculously short diaphanous skirts.
I’m enjoying Tull Street, in spite of the pageantry reminding me that I long ago crossed to the far side of that uncertain age that distinguishes “healthy admiration” from “dirty old man”. But really. I’d ordered a heaping salad of tomato, greens, goat cheese and chives – TSK advertises itself as “local and seasonal” – and man, was it good. After a week of boiled and roasted livestock, inordinately fresh vegetables tasted like heaven. Topped it off with a tasty bottle of “apple-rhubarb soda”, also locally produced. I looked at the ingredients: apple juice, rhubarb. That was it.
I’ll skip the amateur travel guide part this time around – won’t bore you with wandering through the various sites – the Radcliffe Camera (spoiler: it’s not a camera), the History of Science museum, High Street and the canals. Yes, I did stop in to see Miranda – that was about the first thing I did (what kind of father do you think I… no, let’s not go there). But she and friends were up to some sort of video mischief and didn’t need Dad (a.k.a The Source of Eternal Embarrassment) around.

2 responses to “And was Jerusalem builded here…?”