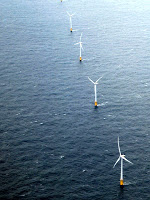 I guess there are some places you choose not to know. Popping out under the cloud cover over the Dutch coast, I had the strange sensation of being somewhere that wasn’t on my narrative map. This part of the trip, in my mind, didn’t include Amsterdam. Sure, it was only a two-hour layover in Schiphol, but the landscape, the seascape looked different.
Fittingly, the first thing I saw was the windmills – a 21st century army of them arrayed in columns out on the water. Then the coastal dunes giving way to long, flat rectangular fields, richly green and bordered by canals. Then the towns, then larger canals – these filled with ships, then…
I wasn’t ready for this. I was going to Africa, and now, here was Holland, rolling out below us. Somewhere in my travel mind, I said to myself: We’ll just pretend this part didn’t happen. It was a strange thing to say – I’ll admit it. But here was a whole new country that – if I let it – would demand that I explore, and look and listen. Even just in the airport – the language, the signs, the inevitable funky knickknacks crammed into concourse trinket shops. All of these evoke a place and a people, even if choked by two levels of airline security and diluted by the river of travelers pouring through from a hundred other countries. 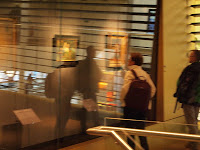 Okay – just a little. Not going into the trinket shops, not going to…. ooooh, look! They’ve got a collection of Dutch masters paintings in a mini-museum upstairs!  Okay, but just a quick look. Heh. Like you think you can.
(An hour later) Good thing I only spent 20 minutes in the museum: turns out at check in that Delta has vaguely botched my rebooking here. Again. But this leg is on KLM, and the cheerful, frighteningly competent KLM desk agents do a bit of ninja-like reservation-foo on my ticket, and I’m good to go. Mental note: I like the Dutch. (Yeah, I already knew that, but these things are easy to forget).
Okay – just about time to board. Six and a half more hours to Accra, then back to the story. Or whatever happens instead. Which, of course, is will also be a story. 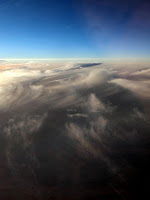 [Much later…]
Ooookay – coming up on 24 hours in transit, starting to feel the effects. Tried the non-Ambien route to sleeping in flight, and I think it’s safe to call it a failed experiment. Tangled dreams that didn’t last nearly long enough, leaving me a bit dazed. Now looking at the sun setting over the Sahara – neither words nor pictures can do it justice, but also looking at getting in late at night to a hotel whose address I’m not entirely sure of.  Yeah, Accra is easy – it’s Africa For Beginners, right? But it’s still Africa, and Accra’s a big city. Let’s see if that “relentlessly cheerful” thing lasts me until my head hits the pillow. (Of course, if I’m posting, it means I got in okay, right?)
Annd… there it goes again: out the door of the plane, with the first whiff of heat, down the stairs, through the lines, the lines, the lines for immigration, baggage, customs, and the vibe starts picking up. Then down the chute and out the doors and into the teeming crush of noise, light, color and people that is Accra. Pushed past the heyfriendwannataxi? mob at curbside, after pausing to give one of them the benefit of the doubt.
“How much to Hotel Deon?”
“Oohhh, I’ll give you a deal: 35 cedis.”
I know the locals pay 10, so I give him a genial laugh, as in “good joke!” and move on, out across the street to where the local taxis pick up. I bid 10, but settle on 15 after an iteration – it’s two dollars difference, and I like the guy’s attitude. I throw my bag in back, and we go bouncing down the backroads to Deon while I get Ebenezer to help me work on my horrendous Twi pronunciation.
It’s now pushing 10:30 p.m. here, and I’ve got to be up at ~5:30 to catch my ride to Kpong, so I’m wrestling with the question of whether to shower tonight or tomorrow. After, of course, I’ve blogged….