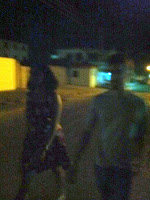 I had no idea where we were. Somewhere inside the triangle of Labadi to the south, Ring Road to the east, and Oxford St. to the west. Where the six of us had turned right and left down the narrow, darkened streets at three or four stray dog corners. Corrugated tin roofs packed the gaps of concrete and cinderblock, punctuated by well-fortified and faceless stucco and stone. Around tire barricades and past trash fires, meeting dark, shining eyes as we emerged into single-bulb shadows of streetside congregations, pouring out into the evening on a river of sound. Casual matadors, sidestepping the unmuffled scooters whose headlamps bobbed in the distance before looming and disappearing past us in a clatter of valves and springs. Heat, heavy and wet in the night, with the scent of smoke in the still air. Not in Kansas anymore? Hell, Kansas wouldn’t know what hit it.
…
We’d all nominally turned in for the evening after a sweltering day at Legon, wrapping up the experiment we’ve been running here in Accra, but some time around 8:00, Nithya pushed a message to the group chat: “What – no Zion Thai?” She’d picked up a favorite restaurant somewhere near Oxford St. during her last stay in Ghana, and was looking for accomplices. A few minutes later, Jenny was in, prodding me on a side channel: “Food?” Ten minutes later: “Good for the Malarone.”
I wasn’t hungry. I was tired. And I’d already decided to lose myself in a Netflix movie I’d grabbed specifically for downtime like this. I was comfortable. But… I was in Accra. Ghana. Africa. With my team. We had four more days together as my last hurrah, and then I was gone.
Another chat message, with a touch of concern: “You there?”
Yes. Damn. Regret can come from both sides of any decision, but rarely is one side not certain. I might regret joining them. But barring the improbable, I knew I’d regret not going.
Yes.
The whole gang was waiting on the landing by the time I’d gotten my shoes on – Maria-Ines and Pete had apparently been easy accomplices, and a few minutes later, there we were, weaving our way down Labadi Road in the dark. It felt wonderful.
I tried hanging on to the moment, the moments. Tried capturing them, the sight, the sound, the heat of the evening air on my face. Told myself: now – remember Right Now. What it feels like, what it smells like. Keep this ‘Now’, remember everything about it and hold it close. Because when you are old, very old, and your grandchildren tell you that you got a faraway look in your eyes, this is where you will have been.
And that moment, grasping at the experience, I found myself almost inconsolably sad. It was like touching a hot stove – it was that sudden, and that painful. The recoil stopped me – right there in the street – and the moment overtook me again. The smell of the smoke, the warm wet air. The sound of Gospel from the shadows of a vacant lot. Jenny, Pete, Maria-Ines and Nithya casually riding the evening groove as we walked down a darkened street on the other side of the world.
I tried again, felt the sting, and again fell back into the moment, letting it catch me, and carry me along like a river.
Hevel hevelim, hakol hevel, said Kohelet. It’s always bothered me that the King James Bible translated hevel as “vanity”. It makes such a trite proverb to say that all is vanity, like attention to the earthly world is a vanity we should disdain. The better translation – “mist”, or “evanescence” – makes for a more nuanced message. To me, it says “Live now.” Say ‘yes’ – now – and experience the world now, as it happens. “Now” will be gone soon, as will you. And you can no more hang on to it than you can to the warm, wet air on a sidestreet night in Labadi.

One response to “Yes.”