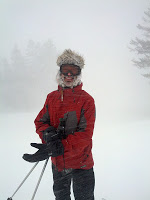 The storm built slowly. My years in New England taught me that the big ones always do. First, as always, there were the tiny flecks, the ones you don’t notice right away. There was still a clearing then – from the ridge to Shirley Lake, we could see Tahoe, and it looked like sunshine might even break through for a couple of minutes. Then it was gone in a ragged overcast, and the flecks fell heavier, clumping now into large soft globes that blew apart like tiny snowballs when they hit our coats and faces.
By the time we turned downhill for another run on Gold Coast, the wind had picked up. The snow was no longer soft, and the storm blew it up the mountain against our bodies in a horizontal barrage. It held me in place, when I stood tall and spread my arms, and even under the Goretex and wool, I could feel the impact of each tiny frozen projectile. We retreated across the ridge, back into lee, and found a wonderland.
Tucked just below the crest of the wind-battered ridge, the wind was soft, and at our backs. Looking up, behind us, snow rose like a vast waterfall, but in reverse. The gale that swept it up across the windward side of the mountain lifted it into an indistinct sky on the lee and, having nowhere else to go, draped it over us like a soft heavy blanket. This was, indisputably, the sweet spot on the mountain. 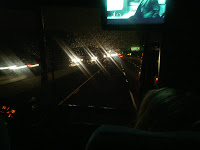 It felt a little improper to be here, skiing on a Friday while everyone else was at work. But that was the whole point of taking time off. And besides, I’d justified it to Devon as research: we’d discovered the Bay Area Ski Bus online, and someone had to check it out. It sounded like a great deal: you get up insanely early (~4:00 in my case) and drive to an abandoned parking lot somewhere. Climb aboard the darkened bus, find an empty seat, put on your eye mask and ear plugs, and drift back to sleep. Wake up somewhere else, a few hours later, climb out and ski. Make it back to the bus by 4:30, and either sleep or watch whatever movies they’ve got going on the overhead screens. Be thankful that you’re not the one driving through the frozen, slush, chainslogged mess of traffic. Watch another movie. Make it back home by, oh, 10:00 and crawl back into bed, happy and exhausted.
Or, at least, that was the theory. But there was no way we were going to subject the kids to it until one of us had made sure that the whole thing actually worked. And it did, mostly.

Rather than catch the bus at its closest and most godawful 4:00 a.m. pickup, I’d triangulated to the last pickup in Oakland at 5:30, netting 45 minutes more sleep in exchange for a longer drive. I hadn’t factored in that, as the last pickup, the only vacant seats I’d find on the bus would be next to those sleepers who others found too daunting to sit with. I chose the seat next to the aggressive looking young tough who communicated mostly by grunts. But to be fair – if I woke Miss Manners at 5:30 a.m. in a crowded darkened bus, I wouldn’t bet my life on getting a civil response.
I put on my own eyemask and earplugs and woke a pleasant four hours later as Christina and Jim, the bus “stewards”, handed out cold bagels, yoghurt and OJ. Thirty minutes later I was riding the gondola up at to High Camp at Squaw. 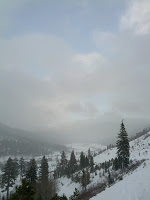 Overall, it was a win. I spent the morning skiing with Zivi, a Canadian woman whose husband had moved them to Silicon Valley for a startup job. She was still waiting for her work visa, so while he revolutionized the something having to do with gamified-social-4G-immersive-webfoo, she was exploring what the state had to offer. The storm didn’t come until later, so our skis spent the first hours chattering down the broad hard-pack avenues between High Camp and the base. We stopped for an early lunch, and by noon, the first flakes were falling.
Zivi retired early in the afternoon; it was the first day of the season for both of us, and the rapidly accumulating powder can take a lot out of you if you’re not accustomed to it. Then I fought the wind and flying birdshot snow back to Shirley Lake for one or two more runs.
Or three. Or four. On the fifth run, I caught up with ski patrol, fencing the bowl off – the wind on the ridge had them worried, and they were shutting down the Shirley Lake lift. I looked over my shoulder at the 50 or so yards I’d have to trudge back to rejoin Gold Coast on the front of the mountain, and he read my thoughts.
His voice was cheerfully conspiratorial: “Oh, go on – take one more run. Just cut back higher on the ridge when you get up next time.” 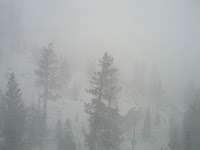 The snow was spectacular. I’d skied Atkinson’s twice already in the past half hour, and each time it was deep, trackless powder. The gale on the windward side was carrying new snow over to us faster than we could ski it away. Descending the knee-deep freshly-dropped powder was a smooth, rhythmic dance: crouch, pump, lift, sway, back and forth in long easy turns. I rarely touched anything solid beneath my skis, and the sensation was closer to flying than any terrestrial exercise.
Deprived of my leeward patch of heaven, I spent the final hours of the day exploring the other side of the mountain: Red Dog, Julia’s, and the imposing chutes off of KT-22. But by now, the wind had let up, and the snow it left made everything feel easy. West Face, and Nose would have been intimidating on another day, but with this powder beneath my feet, they were gracious invitations. I kept stopping when the thin air and my unaccustomed legs demanded, and was always astounded at the smooth, regular slaloms I had left in what looked – even from below – like intimidating plummets.
Finally, finally, finally – yes, I had to do one more run after that – I convinced myself to call it a day. Christina had given us stern warnings about the bus leaving a 4:30, with or without us, and I cringed at the thought of called Devon to tell her that I, uh, was going to be home a little later than I thought, or maybe the next morning if I couldn’t find a ride.
Back at the bus, Christina and Jim had set out an après-ski spread of cookies, hot cocoa and cider to re-invigorate us for the trip home. The snow was still falling heavily (note to self: Oreos topped with a quarter inch of fresh snow are a novel and surprisingly tasty sensation), and there was a sense of urgency about getting on the road and over Donner before weather closed the pass for the night.

As we crawled, tire-chains thwacking our way up to the pass, Jim took a poll on movies for the return trip. A show of hands leaned heavily toward Bourne Legacy and Bruce Almighty, with a couple others in reserve for those heading further south. In the seat-shuffle, I’d ended up sharing mine with Jim and Christina’s (mild-mannered) cooler chest, and managed to spread out for the return trip. Watched the slow march of uncountable cars ahead of us through the snow splattered windshield and soaked in gratitude that I wasn’t the one driving.
Made it back to the Oakland drop-off only a half hour late in spite of the storm, and at 10:45 slipped into the house and bed as dark, quiet and warm as it had been when I’d left it 18 hours ago.
[BTW – just now arrived up at Incline Village, this time with the whole family in tow, having traversed Donner again, this time with me at the wheel for a 6.5 hour drive through the rain and snow. Snow’s barely stopped falling since last week – it’s looking like a great season in the works!]