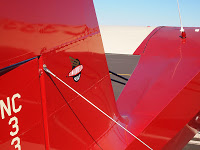 I think the problem is that I’ve got a lousy imagination. I love telling stories, but I’m absolutely no good at making them up. So the only way I get new stories is by putting myself into situations where new stories happen to me – then all I have to do is write them down.

Today seemed like a good day for a new story: a breathless deep blue morning, pierced by the red glow of a sun gaining its first toehold on the horizon. No plans for the day – a gloriously empty Saturday – except to go for a birthday flight.

No, not my birthday – I’ve got a couple of weeks before that. But on January 11th 1946, not even halfway into the previous century, the FAA saw fit to slap an airworthiness certificate on NC33395, the 15th production Skyranger built since Commonwealth began postwar production. She didn’t take her first flight until January 16th, noted in the logbooks as just a “test hop”, but I figure today was as good a day as any to commemorate her flight.

Target for the morning was the monthly “second Saturday” pancake breakfast at Modesto airport. Just 48 miles east of Livermore, where the Skyranger is living until I can find a local hangar, it’s a regular excuse for people who are plane nuts (and, some would say, plain nuts) to talk shop over pancakes and bad coffee.

Fitting a clear night, the morning was cold by California standards, with ice fog and a thin sheet of ice in the shadow of the hangar as I skittered around during my preflight. Tasha and the gang had just pulled ‘395 out of the hangar before I arrived, so she wasn’t completely cold-soaked. A few extra shots of prime as I cranked the starter, and she started right up with a chipper poketapoketa of the C-85 under her cowl.

Sun was still low as I climbed away from the field, and the hills radiated an almost unearthly green from the recent rains. The morning’s cold dry air put a spring in the little plane’s step – Skyrangers are not legendary for rocketship performance – and we swung east for the 30-minute trip through California’s central valley breadbasket. Little farms lit up in the slanting sunlight, swirling flocks of starlings settling in an open field – all these were spread out at my feet. However tempting the lure of higher-faster-bigger planes, those pressurized, turbocharged stallions that can launch into the flight levels at 300 mph, this morning’s excursion tapped into something inseparably close to my heart.

Puttering along there, two thousand feet up at somewhere around 100 mph, I could feel the texture of the countryside. I watched smoke rise slowly from the chimney of a farmhouse, circled an old truck navigating the dirt road over irrigation ditches. Waggled my wings at a pair of egrets going the other way, not far enough below me to escape notice.

The pattern at Modesto was predictably chaotic. Tower controller was doing his gentle best with folks who perhaps didn’t get out much, and when they did, apparently weren’t much accustomed to using the radio. Controller asked me three times to repeat my initial call in, asked other folks to kindly stop stepping on the damned transmission and wait their turn. He wasn’t sure what a Commonwealth, or Commodore was – I think he called my a Constellation at one point – gave me a left-45-cleared-to-land and asked if I could make a short approach.

Did, and squeaked the landing gratifyingly. Ground didn’t bother asking where I was headed; everyone was going to the same place. Tied down, ambled into the hangar, and laid down my $6 for a plate of pilot chow. 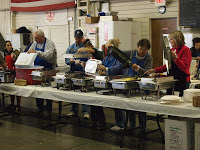 There’s something I love about these fly-in meals. The quality of the food swings both ways (somewhat farther in one), but they all seem to run about the same way. You’ve got your long table of steam trays, staffed by cheerful airport volunteers and their long-suffering (but still cheerful) spouses. They’ll chat you up about where you’re from, thank you for coming, and conspiratorially offer you an extra strip of bacon if you’d like. The fact that they do that for everyone doesn’t make it any less endearing.

Then there are the tables. The long folding-leg jobs, sheathed in taped-down rolled paper tablecloths, stretched end to end down the center of the roped-off hangar. Inviting – no, insisting that you drop yourself in elbow-to-elbow with total strangers who, five minutes from now will be your newest flying buddies. You look at the logo on their cap – “Oh? You fly a Beech 18? Lovely plane – I managed to hitch some right seat time in one a few years back…” and the conversation rolls on until one of you excuses yourself to get more coffee. There are a lot of old friends slapping each other on the back and sharing photos of grandkids. And a lot of grandkids in tow. 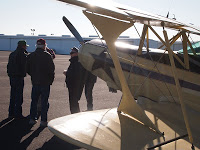 Once you’ve tired of poking around the cholesterol nuggets on your plate, you wander back out to the flight line, admiring everyone else’s planes and standing by for them to admire yours. Chat them up about the gorgeous paint on their Cub, no, no, I fly a Commonwealth Skyranger. No, don’t worry – nobody else knows what it is either; it’s that red and creme taildragger over there. Yes, thanks, thanks – we just finished the restoration last fall – very pleased with how it turned out. 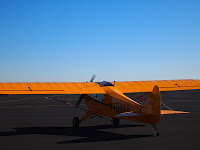 Until eventually everyone starts making their excuses to climb on in, fire up their engines and putter off into a flawless blue morning sky until it’s time to do it all over again next month.