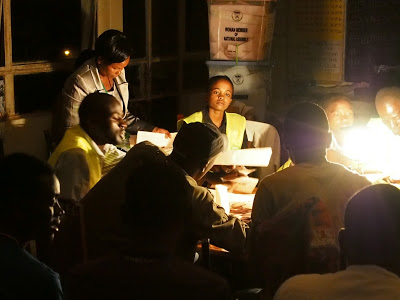 North Highridge Primary School, Westlands, Nairobi. The look in her eyes is far away, and the recognition rises in me like a wave: this is it – this is the moment I’ve come for. The ten thousand miles of travel, the days of dusty discomfort, were all so I could be right here, right now.
The day itself has fallen away into a blur – the faces, the smiles, the looks of concern and eager anticipation. Where was it that we got bullied by that PO? Westlands? He wanted to keep our credentials, and said we couldn’t leave until we’d signed a form that, well, he didn’t have time to look for now. We’d have to sit there in the corner and wait. Pardon my French (Oley’s French is very good, obviously), but bullshit.

And at the entrance to Hospital Hill – the line stretched out over a mile by the time we got there – the people at the gate asked if I would take their picture, yes please, because they were there to vote. There was a special ring to the way they said it – a touch of fervor and faith that would not be out of place in a Southern Gospel revival. We are here to vote. Honest – I felt a shiver go down my spine. 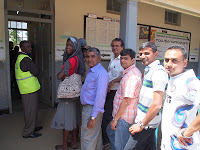 At the Oshval Jain Center – Nairobi has a large Indian population, many of whom have been living here for over a century – the line of voters was a kaleidoscope of faces and fabrics. Black, white, brown faces. Starched white kurta and turbans in line with redbluegreen Masai shawls. May I take your picture? Yes, yes, of course!

And and and… it was all a blur, from before dawn, through the heat of the day, until night settled in again. But here, now, with the look in this young woman’s eyes, it has all snapped into sharp focus. This is why I’m here.

She couldn’t have been much more than a teenager, sitting at the left hand of her presiding officer. Her expression reminds me of the beatific faces in those paintings of Catholic saints, meeting their fates with peaceful, unresisting determination. Yes, she’s tired – we all are. Oley and I have fortified ourselves with cocoa nibs and chocolate, and we’re still fading. This young woman? She will do whatever he PO tells her needs to be done – you can see that in her eyes.

The PO is a powerful, graceful woman, wearing a silver business suit. She radiates a combination of patience, strength and humor that makes me suspect she earned her stripes as a primary school teacher. When, at 5:00 p.m. the last voter had deposited their ballot (many polling stations took hours more to clear their backlog), she stood and faced us.

“It is now five o’clock, and I declare voting finished at this polling station. Ladies and gentlemen, party agents and observers: the men and women on my staff have been here since last night. They have been working non-stop since five this morning. May I ask you to permit us a ten minute break before we begin counting?”

After the break, the PO marshaled us all – again, the third-grade teacher coming through – to rearrange our wooden benches around the counting table.

“Ladies and gentlemen, agents and observers – we are about to begin counting ballots. Now, before we start, let us agree not to fight about it. The standard of validity is voter intent – if, when we look at the ballot, we can determine who the voter intended to vote for, the ballot is good. Tonight, when it is late and your candidate is not winning, please don’t cry and complain that is a circle instead of a check mark. Are we agreed? Good. Let us begin.”

The seals were cut, and the paper ballots poured out on the table. By the light of the Coleman lantern, she held the ballots up one by one, displaying them to the party agents as she called out the candidate, then handing them to her staff to stack.

Our saint received ballots for Uhuru, the woman to her left got the ballots for Raila; six other staffers around the table gathered ballots for the remaining seven candidates. “Raila. Uhuru. Uhuru. Uhuru. Raila. Peter Cannon.” It occurred to me that she, like most Kenyans, was calling the candidates by their first names. Yes, this election is personal.

“Raila. Raila. Raila. Uhuru.” She noticed that the party agents were starting to lose focus, and interrupted the proceedings: “Listen: my staff and I have been up since yesterday morning to make sure this election is run properly. And you have been here all day too. But now is when it is most important. Please, pay attention.”

She paused and glared at the party agents. “You just let me put a ballot for Raila to Uhuru. Come on, now!” 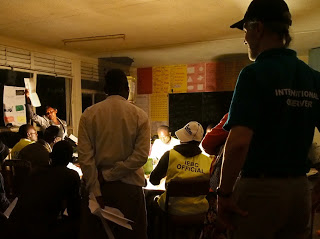 Chastened, they leaned forward with renewed attention. Five minutes later, when she called an Uhuru ballot for Raila with a gleam in her eye, the Jubilee party agent jumped to his feet in protest. “Very good, now!” It was the voice of Ms. Newby, my 3rd grade teacher, when someone had correctly identified the capital of Norway.

A dozen more ballots, then “And look – this person loved Raila so much that he circled the picture and checked the box. No quarrel, okay?”

The agents nodded agreeably, and the count went on. Another lone ballot for Peter Cannon – the PO pursed her lips in mock sympathy as she handed it over, and there was laughter around the room.

That was hours ago, and we’re only on the third of six ballot boxes. It’s been a long day, and it’s going to be a long night. I realize I’m dozing, and stand up from our bench to get my circulation running. Our saint looks up at the motion and smiles briefly as our eyes meet. Then she turns her attention back to the table, back to the ballots, as our PO calls out another name by the light of a Coleman lantern.