First day of meetings – we get context, or at least the start of it. Like the city itself, there are layers built upon layers, going down through the centuries, millenia, going down to the bedrock itself. And like the city, no one will ever be able to get to the bottom of it, because so much has already been built upon the rubble of what came before. There’s the historical context, of course, but also the political one – who can do what with the power they’ve got. Then the cultural, social and business contexts to be taken into account. 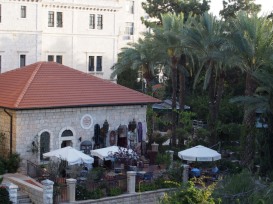 Case in point: We’re staying at the American Colony Hotel; it’s a lovely old residence from the 1890’s, built under the Ottoman Turks from parched white Jerusalem stone, laced with curved archways that open onto fragrant gardens. Wonderful, evocative place but, as our local expert tells us, staying here implicitly aligns us with the moderate Palestinians, and endorses the two-state solution. Wait – what?!? Turns out that the American Colony is operated by East Jerusalem Palestinians – we’re close to, but on the Palestinian side of the now-symbolic “Green Line”; those gardens are a favorite meeting place for negotiators quietly reaching across to moderates on the other side. And that’s just the beginning. Like this city, like verses of the Koran, Torah and the Christian Gospels, the layers of meaning just keep going as deep as you care to dig.

Today is Yom haShoah – Holocaust Remembrance Day. The sirens went off at 10 this morning for a minute, and we stopped what we were doing, and stood in silence. It sounded, strangely, like a shofar call – T’kia G’dolah, the long loud blast, telling us to pay attention. No coincidence, not a chance.

Today also, the wind came. It blew the fine sand of the Judean desert up over the city. Dani says this means the rains are coming. But for now, we have the sand, the dust. It has a comforting, almost appropriate feel, as we retrace the footsteps of our civilization’s ages.  It blew over us on the Mount of Olives, obscuring the city below. It followed us as we walked, entering from the Jaffa Gate, then in our faces, swirling down from the ramparts of David’s Citadel. Chasing us through the hollows of the Christian quarter, along Via Dolorosa and finally relenting as we squeezed in among Russian pilgrims at the Church of the Holy Sepulchre. But outside again, it blew hats, yarmulkes and scarves high across the broad plaza at the Western Wall. It’s blowing still.

It’s worth noting here, as an aside, that I seem to be a magnet for roving rabbis, much the way I am for small African children – they just come out of the woodwork at me. (me: “I’m approachable?” “More like ‘easy prey’.”)  I think the others got away unaccosted, but in my 10 minutes by the wall, I was blessed four times. Only two asked for a donation, but I caught one slipping in a “and may you and your family come to live here in Israel forever and ever” after the traditional bits.

Also, I should clarify: Since I complained in my previous post about not having any “play” time, this walk was a physical context for a lecture-on-the-go, setting the cultural/religious context that looms over everything here. Until you’ve walked the old city, it’s hard to appreciate how closely these three often feuding religions have survived cheek-by-jowl with each other in an area the size of an American shopping mall. And somehow they get along. Mostly. Sort of. When they’re not dealing little bits of when-dad’s-not-watching smackdown to each other. (Case in point: The Mosque of Omar, next door to the Church of the Sepulchre, sports a banner quoting the Quran: “And Jesus said, Indeed, I am the slave of Allah.”  I mean, just sayin….)

One response to “Layers, Levels, and Unintended Consequences”