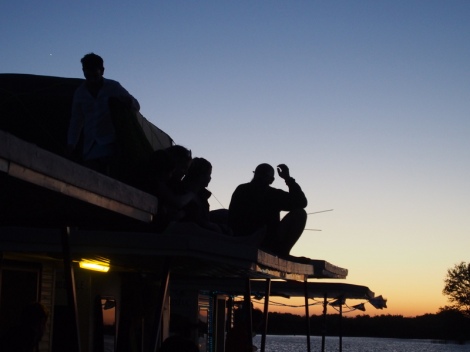 Night is a sort of mask we wear. Not to really disguise ourselves, but to give ourselves permission to be someone, something we aren’t during the day. Really, electric lights banished the darkness well over a century ago, and there shouldn’t be any real difference between how we conduct ourselves during day and night, but somehow there is. 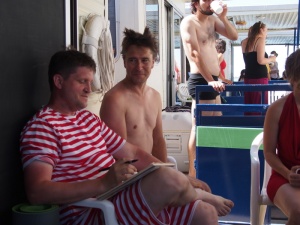 Day on the water here is pleasantly social: we build, we put stuff together. We chat lazily in the heat of the afternoon sun. Ithaka has rafted up as a new, three-boat island a little to the east of ours, and Lorien, Miranda and I paddle over to say “hello” and visit the tea house they’ve erected on the roof of one of their boats.

They – Ithaka – had visited us a little earlier: I’d been puttering around the kitchen of our boat late morning, and Bobby peered in the door.

“Yes?”  (Recall that I don’t particularly recognize faces, especially ones I’ve not seen in nearly a year)

He’s soaked, wearing only the swim trunks he swam over in, but we give each other the full hug that’s a customary greeting in places like this. He calls out, over his shoulder, vaguely upwards: “Hey Rosie – Pablo’s here!”

“Yeah we all are!” – and he scrambles up the front rails, out of sight, to the roof above me. I’m nowhere nearly as strong, young or limber, so I detour around the back, where Breeder’s staircase is, and find myself surrounded by a dozen or so impossibly beautiful – and I know by association – brilliant young men and women from the Ithaka co-op house in Palo Alto. It’s like the Mensa+Peace Corp Swimsuit Calendar, drying out on my roof.

We met Ithaka last year at Ephemerisle; Rosie was starting on a journalism program at Stanford, and we got talking about the future of media and technology. Devon and I visited her at the house (the one back in Palo Alto, not the current boat-shaped one out here on the water) some time later, and spent the pillow-stewn evening discussing the nature of happiness, social responsibility, and every other topic under the sun with the gathered house residents.

Here, this morning, about a dozen of them are gathered on my roof – I have no idea how or why they ended up here vs any other boat in the island, but Bobby and Rosie introduce me to the rest of the gang who’ve swum over: Tess, Dan, Zoe, Matt, Yann, and… okay, you know how I am with names. I plonk myself down and start answering questions stemming form the introduction: yes, that’s right, I’ve done election observation for the Carter Center in Liberia and Kenya; no, I paid my own way – we give money to the Carter Center, so it seemed a little backward to have them pay it back to me to perform the mission we’ve given them money for. In a couple of minutes, we’re deep into life in Nimba county, and the mechanics of how you conduct national elections in a country with no municipal electricity or running water.

After about half an hour, I get the sense that I’m lecturing a little – the Ithakans have arranged themselves into a classroom-like semicircle; but they keep asking such (to me) great and important questions, and I can’t make myself stop. I do, eventually, explaining that the kids will be back soon, and I’ve got to get started on lunch for them. The next/last I see after we’ve said our goodbyes is splashes as the dozen of them take to the water again, swimming north to Titan Island to check out the scene there and make their greetings.

Paul comes by with a stack of bowls. Over on Koala, at the end of the lineup, Christie has made way too much mung bean, beet and avocado miso soup, and he’s looking for takers. We counter with our own surfeit of roll-your-own burritos, which we’re already passing off on anyone who crosses our front deck. And there are plenty of people who have: Cymbre’s reputation as a face painter has spread beyond Dromhaven, and Ephemerislanders wait their turn between nibbles and conversation.

And so the day is made up of encounters like this – exploring the constructive, intellectual and inquisitive side of human nature. Yes, there are the loud roars of jet ski rides, en mass leaps from the roof into the murky delta, and the typical carousings you’d expect from a weekend on the water. But these are pockets of noise – outbursts in the relative calm.

As the sun sinks to the horizon, though, there’s a palpable change. It’s a tension, almost as if everyone is preparing for some physical metamorphosis. Conversation becomes more quiet, tentative before – in little patches it is suddenly loud, boisterous in a new way. It catches and spreads, like embers of a wildfire landing and igniting their own outbursts, and within a few minutes of sunset, the scene is transformed. Different music now blares from the PA systems of three boats, and EL wire transforms the enormous turtle-shaped tent on the roof of Infinite Regress (“It’s turtles all the way down”), into something vaguely terrifying, evocative of a 1960’s Japanese monster movie. 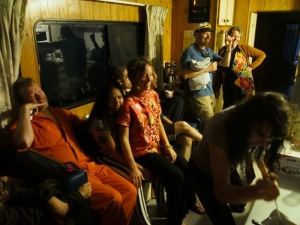 Crasch, Karen and others have returned from H&H Marina, where they assembled “The platform” and towed it to the inside corner of Dromhaven’s “L”. A dozen people – kids, grownups are dancing tentatively on the flexing, bobbing plywood deck, trying to match beat with Kelly’s mashup mix while not trampolining each other into the water. Another campfire sing has broken out in Mostly Harmless, and at the end of the island, on Lovecraft, Peter and Erin are doing LED poi demonstrations.

Sure, there was dancing and music during the day, but somehow this is different. As I said, night is like a mask. That, honestly, was the part of Goldman’s Lord of the Flies that stuck with me. How the boys were unable to successfully spear the pig, hunt “the beast”, or, well, do other things, until they painted their faces and masked themselves. The mask, like the night, gave them – gives us – permission to do things, and do them in a way we would not ordinarily let ourselves do them.

Here at Ephemerisle, the masked activities of the night are considerably more benign, of course, but it’s impossible not to notice the sense of “permission” given by the darkness, especially across the way on Titan, the “party island”. They’ve got neon and a massive thumping beat you can feel from across the water, probably a lot of alcohol and other things going on. Me? I’m getting all the groove I need right here.