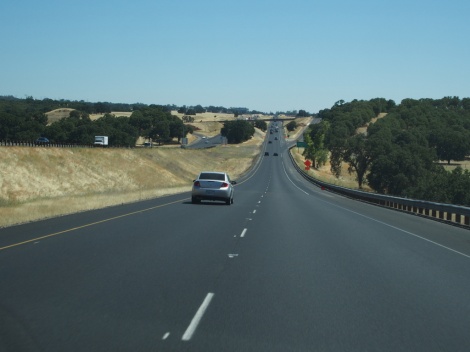 When they say “getting there is half the fun,” the implication is that being there is the other half, which doesn’t leave a lot in the First National Bank of Fun for the trip home. And I’ll admit that, when Devon and I hitched a ride up to Ashland on T & M’s jet a couple of days ago (did I mention I got to fly a jet?), we put an enormous down payment of fun on the “getting there” part. Getting to romp around Ashland for a couple of days with T, M and their kids was also a blast, but we still had to contend with the issue of getting back home in time to retrieve our own kids from the various excursions and summer camps we’d sent them off to. 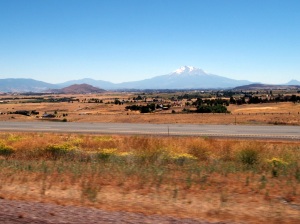 So, there are commercial flights out of Medford, but they fly back to San Jose via Salt Lake City and – with the layover – take most of a day to get there. And that’s not even considering the cost of a couple of last-minute one-way tickets. Surprised us to discover that the fastest (and cheapest) way to get from there back to here by mundane means was to just tell Avis that we weren’t going to drop their car off where we’d picked it up, and take it on a good old-fashioned roadtrip down I-5.

The last time we’d had the chance to do something like that without kids was, well, it was before we had kids. Ironically, Avis had run out of  “compact” cars and gave us a free upgrade to – you guessed it – a minivan. But I’ll admit it: the Enormotron (this is what we called the silver-gray Toyota Sienna in question) was a pretty comfortable ride. It had surprisingly good fuel economy and gave us no trouble over the 377 mile drive down, other than insisting that MAINTENANCE WAS NEEDED RIGHT NOW every few minutes along the way.

Yes, we did call Avis, rolling south somewhere between Redding and Red Bluff, and were assured that we shouldn’t worry about it. So we didn’t. 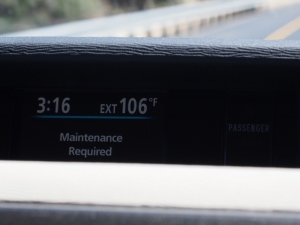 As I said, it had been forever since we’d done this drive. Up over the Siskiyou Summit, then down the winding way though Dunsmuir and Shasta. Out into the hot hot hot flats of the central valley and south into the farms of Willows and Williams. Fields of pistachios, olives and sunflowers at roadside. Vaguely ominous homemade billboards declaring “Protect your Freedoms!” and crayon-colored collections of tractor trailer rigs – this is the west coast version of America’s heartland, and we love it for its own brand of weirdness. It was a beautiful thing to be passing through – mostly because we knew we were just passing through, on our way home to Palo Alto, to our particular brand of California weirdness.

The first time I made this drive was in 1985. I was starting grad school in Seattle and had just bought a ‘76 Dodge Colt for $500 using the brand new American Express card my parents had co-signed for. Brian and I had just planned to it drive down to Portland, but the destination kept moving, and some number of days later we found ourselves on the outskirts of Los Angeles, with an eye on Tijuana. I think I already wrote about that, though. 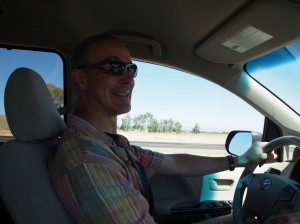 Anyhow – the visceral memory of cajoling the bent-frame, air-leaking, broken-heatered, underpowered Colt over the Siskiyous was still with me on this drive, and I marvelled at how comfortable and quiet it was in this palatial little Barcalounger on wheels.The thing had five – count ‘em five – cupholders accessible from the driver’s seat. Three different zones for the air conditioner; that’s more than we have in our house. And better seats, too. If it weren’t a minivan, you could almost get used to the idea of… No, never mind.

[This, to quote Mrs. Kennedy, getting a bit long-winded. Do you have a point you’re trying to make?]

I guess what I really want to say is just that it was a lovely little ride. Something just over six hours on the winding road back home, flipping through radio stations (What? No XM?!?) and sharing casual comments about nothing at all on the way. Humming Beatles – Two of Us – somewhere in the back of my mind. Ahyup – maybe this is what roadtrips become when they’ve grown up. And just getting there? It’s not quite half the fun.