Typical thread for the gang starts with “Hey – anyone up for climbing on Weds?” Others bounce back: “Weds is no good. Tue/Thu?” and eventually we settle on a plan that some four of five of us will rendezvous after work (other peoples’ work :) down at Planet Granite for an evening of indoor rock climbing, rounded out by milkshakes at the Peninsula Grill, or leftover Humphy Slocombe ice cream that Jeff and Jenny just happen to have stashed in their freezer. Indoor rock climbing and ice cream – it’s a wild life, but I guess that’s just how we roll.

It makes me pretty old school to admit that I’m still getting used to rock climbing as something that you do indoors, in a gym. On things that aren’t actually rock. But it turns out that yeah, while scenery and fresh air are a bit wanting, the indoor substitute has really dialed in the fun and convenience factors. The belay ropes are all in place, the routes marked by difficulty with rainbow-colored tape, and you don’t have to get up before dawn and drive three hours to get to a decent place to climb. It’s social, too – there are about a bazillion other folks climbing on other routes right next to yours, and you get to collectively cheer on your friends when they make the impossible overhang on that 5.10b that stymied you.

So it’s something I’ve started looking forward look forward to each week, and was hesitant when our starting-to-become-regular climbing sessions got interrupted by someone else’s memories.

You see, after 35 years, the Malibu Grand Prix and Mini Golf was closing. Now, I’d done Malibu Grand Prix – the racing car part – once. That was, let’s see, almost 35 years ago too, and it didn’t leave much of an impression on me. They’d just opened one up in Denver, and I’d just gotten my drivers license. It was expensive back then, I think $1 per lap, but a handful of us from my high school (the old version of “the gang”) saved up our allowance for a few times around the track.

It must have been the summer after junior year, because I was on the debate team back then. I was never was any good at debate, but it always seemed like fun. I remember this connection because the girl behind the counter at Malibu recognized me when we bought our tickets. She said she and her partner had gone against us at a meet that year, and that she thought we were really good. We weren’t, and I was embarrassed that I didn’t remember her. She pretended not to mind, and somehow we ended up with more tickets than we’d paid for. I remember the racing part a bit – I wasn’t very good at that either – but mostly I remember walking by on the way out, waving at the girl and saying thank you, and good to see you again, and still feeling bad that I didn’t remember her.

Anyhow, those were my memories from Malibu Grand Prix, from the other one out in Denver way back when. But folks here had their own memories, I suppose, and Jenny suggested that we forsake climbing to join them in a last round of nostalgia before the place shut down for good. 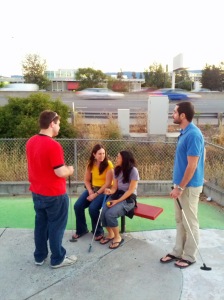 We decided to skip the racing part and stick to the mini golf side of things. I’d never thought much about mini golf – I remember it as the sort of thing that parents thought was a good idea for a family excursion and always ended in tears. I do remember we took our own kids, once, when they were much younger; the details are a blur, but I’m sure it ended with us buying ice cream to make it up to them. Seemed like things would go a little better with a pack of kids-only-at-heart. So sure – why not?

Five of us survived the usual coordination shenanigans: Jeff, Jenny, Laura, Andrew and me. In the great heterogeneous swirl of humanity filling the place, I appeared to be the only person who wasn’t stumbling over old memories of the place. Big, burly, pierced and tattooed guys behind us in line reminisced about being kids here, and lamented the end of an era. 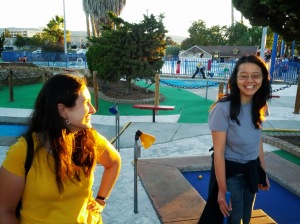 We made it through the line to get our putters and balls, chose Course #2 and got down to the business of hitting stuff (gently) with metal clubs. We knew, before any swings had been taken, that much of the entertainment value of the evening would be in revealing to each other just how bad we were at this activity, and it began to feel remarkably like a contest in demonstrating the true depth of that lack of skill.

I took an early lead in the contest, requiring four strokes just to get past the initial “loop the loop” obstacle, and another three to sink the ball once I’d made it to the green. But there was plenty of competition, with some pretty spectacular demonstrations of what can be accomplished by a combination of bad luck and lack of skill. We were having a lot of fun.

A few things became apparent about the course by the third hole. First, the owners must have figured out a while ago that they weren’t going to get their lease renewed, and had stopped, at that point, putting any effort into maintaining the course. The challenges of each hole relied more on navigating the torn, bunched, sagging or bare Astroturf than on any intentionally-placed windmill, corkscrew or garden gnome. 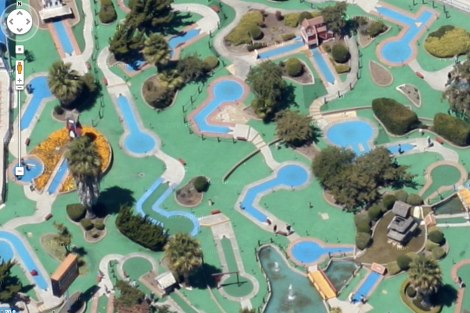 Second, the course designers, back in the 70’s, clearly had not taxed their imaginations very hard in the design of things. After the first obstacle (the loop), subsequent holes began to look suspiciously alike. Hole number three was a 90-degree bend to the right. Number four was a 90-degree bend to the left. Number five was… a slight downhill. Six had an actual obstacle: a pole hanging over the hole itself, the idea being that your kid sister starts the pole swinging (“No – I want to swing the pole, mom! She got to swing it last time!”) while you line up for the putt, in hopes that it will manage to swoop back over the hole just in time to knock your carefully aimed shot away. 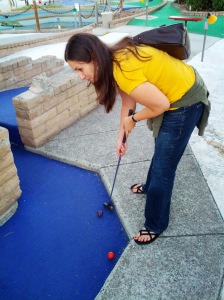 To be fair, there was a windmill on Hole 9, but it spun idly above the green, vanes never in danger of deflecting the ball you were trying to hit through a little metal gate at the base of the structure. If – heavens forfend – you missed the gate and ended up in the moat, your ball would be routed through a tube that dropped you off… in the same place as if you’d succeeded.

This challenge was followed by two holes that, as far as we could tell, were identical. Not one, but two 45-degree deflections in a row. We could scarcely contain ourselves. Okay, we couldn’t – we had some good laughs at the expense of the course designers. But hey – we had laughs, and that’s what mini-golf is supposed to be about, right? 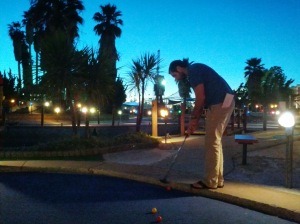 It was full dark by the time we made it to the Eighteenth Hole, which was – with more imagination than most of the others – a sort of skee-ball obstacle, where you shot your ball under a grating, off a ramp, and tried to land in the bullseye ring for maximum (minimum?) score. Of course, with the ineffective lighting, everything beyond the grating was dark, and none of us could tell worth a damn where our balls had ended up.

It was a fitting end to the game: ridiculous and inconclusive, and I think it provided us as much – no, more entertainment than it could have if it were some elegant, beautifully-designed mini-golf course elsewhere in the world.

There was, apparently, no mechanism for preventing anyone from going back and playing another round if they wanted – I think the course itself was dull enough to ensure that no one was going to try and get more than their money’s worth by shooting extra holes. But they did offer one arcade token for turning in your ball and putter at the end. Typical game in the arcade took four tokens – equivalent to about a dollar, I think, so this really wasn’t a big incentive. But I guess they figured that the black market for stolen mini golf putters was pretty slim, and besides, now that we had our tokens, we kind of had to go into the arcade, didn’t we?

Inside it was…an arcade. Walls of blaring, blasting shoot-em-up games and towers of flashing neon, promising riches (or an MP3 player) to anyone skillful enough to steer the dangling monkey arm over the chute, or guide the robotic scissors to cut the right string. And it was packed full. Grandmas and little kids. Those same tattooed, pierced young toughs egging each other on in boyish glee. Old toughs reminiscing to their kids how it was, here, when they were young. It was hard not to get swept up in the nostalgia of it all, that for most people here, this was the end of something, the last time to make memories in a place they’d grown up with. 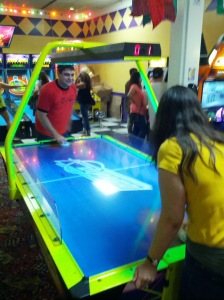 Andrew put a few dollars in the change machine to get more tokens, and we tried a couple of the prize games, unenthusiastically. But then there was the air hockey table – standing empty and a little forlorn in the middle of the commotion. No flashing lights or blaring music; just an elegant game from a more civilized age.

We took turns at the table – trading off players on almost every goal. Was no point keeping score, of course. We played through something like three games – turned out that the coin feed was stuck, and you could just push the tray in and pull it back out with your coins still in place. I’ll admit that I felt only a slight twinge of compunction about taking advantage of the free games – this was, after all, the last night of other peoples’ memories. Does this bode poorly for how I’ll react if we should find ourselves perched at the end of the world? I’ll hope not to find out.

Finally, it was 9:00. The fuzzed-out voice on the PA announced “Pphhhhrrrrrzzzzttttgggrrsssso’clockgggglllmmmfffnnnsssclosinginssvvvvvvfffmmmminutes.” Or something like that. It was time to go.

So there were goodbyes in the parking lot. I think there was some tentative move towards a pie or ice cream-oriented destination, but I was feeling like I needed to get back, to make it an early evening. There’d be next week, for climbing at Planet Granite or something. And there’d always be somewhere new to make memories.