It’s a bit over two months now, away from The Great Machine, and I’m surprised at the number of friends, and even family, who still haven’t heard that I left Google. Well, I wrote it up on my blog, and posted to Facebook, Google+ and Twitter. You do read my blog, don’t you? I use the blog to tell people what I’m up to. I also use it to figure out who really loves me.

Actually, I use the comments section of the blog to figure out who really loves me. (Those of you who know me well will realize that the pathologically “nice” side of me is cringing at the thought of causing anxiety by teasing people here. Fortunately, the more rational side is saying “Hey, those people aren’t reading your blog anyway – get over it!”)

What’s it been like being away? Very nice, and not at all as jarring as I’d expected. I was expecting to feel lost, adrift, spending each day looking for direction and purpose. I was expecting to suffer acute Google withdrawal, marked by ennui and recurring Phantom Benefit Syndrome (PBS): “Lemme just grab a snack from the microkitch… oh.”  “Maybe I’ll schedule a massage this afternoo….uh.” “Time to browse the online menus to see which cafe has the best lunch today…hmm.”

But you know? Not a trace. I really don’t want to encourage anyone to just walk away from anything, but honestly? It’s felt like one nice, long comfortable weekend stretching into another. Yeah, sorry.

It’s not going to last forever, of course, and I’m certainly not just sitting in front of the TV eating bon-bons. To be honest, one of my post-Google TODOs was “watch more TV” and I’ve pretty much failed on that front. But I’m writing a lot more (more on that later) and flying a lot more. I’m spending time exploring the city, just wandering. I’ve also been spending more time with the kids, in mutually-agreeable activities, at that. I appear to have accidentally started a small business on the side. And most importantly, I’ve been making time for the one thing I specifically said I wanted to do when I left: sitting on that hillside in my mind and letting the noise settle, so I could tune into whatever faint sounds have been getting drowned out for all these years.

And it’s working. For all the changes, the biggest difference in my life is that I’m noticing a certain stillness in the world around me. I mean, my life seems remarkably jam-packed for a guy who officially has nowhere he needs to be, but in between the meetings and commitments, I’m able to stop, right there in the parking lot, and just feel it. The closest I can come to describing it is like when you step out of a noisy bar or conference hall into the out of doors, and it feels like the crush of people, the crush of sound has suddenly been lifted away. Yeah, that’s what it’s like, but all the time, when I stop to notice it. Which is often. And yeah, it’s nice.

So – the writing thing. I have been writing a lot more, not that you’d notice. Most of it isn’t bloggy stuff. I’ve been trying some magazine-style writing; haven’t sent any of it anywhere, but I’ve worked up a piece I like on Ephemerisle, and am starting in on another one about election monitoring in Africa. Also been trying to get back into the habit of writing fiction. Seems like it shouldn’t be that hard, right? You get to just make stuff up! But it’s bafflingly, maddeningly difficult. And I keep finding myself wandering down to the kitchen and interrupting my family at random intervals:

“Guy meets a girl. Where? They’re both twenty-somethings. Oh, also has to be somewhere he can get without a commercial airline. He doesn’t fly airlines.” 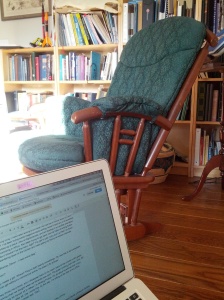 She throws me a bone, and I disappear back to my room, back to the comfort of the green rocking chair we bought when we Miranda was born. The green rocking chair that I love, but that I only let myself sit in When I’m Writing Fiction. It’s all about incentives and choice architecture, after all. (As I write this, by the way, I’m sitting on the floor of my office, leaning against the closet wall. The green rocking chair beckons, seductively, but I don’t get to sit there until I get back to the story where the guy meets the girl. In Liberia, by the way. I’ve decided that he’s got a temporary gig driving for USAID, and she seems to be a damsel in distress. With a secret. How and why he got to Liberia in the first place is another story, which I’ll be weaving in as well. See? I’m making stuff up!)

To further leverage the choice architecture, I’ve signed up for a fiction writing course at Stanford, starting in a couple of weeks. A real one, on campus. And November is coming – a couple of my more writerly friends have signed themselves up for NaNoWriMo and the peer pressure is on. Seriously.

But where was I? Oh yeah – keeping myself busy. Honestly, I don’t think this phase will last forever. A lot of my friends have left (“graduated” is a term I like) big companies and made it only a couple of months before they tired of traveling/gardening/watching TV and formed another startup. I think I’m going to last a bit longer than that – we’re two months out, and I’m still remembering all those things I wanted to spend more time doing. Sailing, for example – I completely forgot that I love sailing, and wanted to do more of that. Baking. Hiking. And we still haven’t even started in on painting the house.

Anyhow. That, as Mr. Keillor would say, is the news from Lake Wobegon. More adventures as they happen. In the meantime, stay tuned (if you really love me, that is).

15 responses to “Since You’ve Been Gone…”