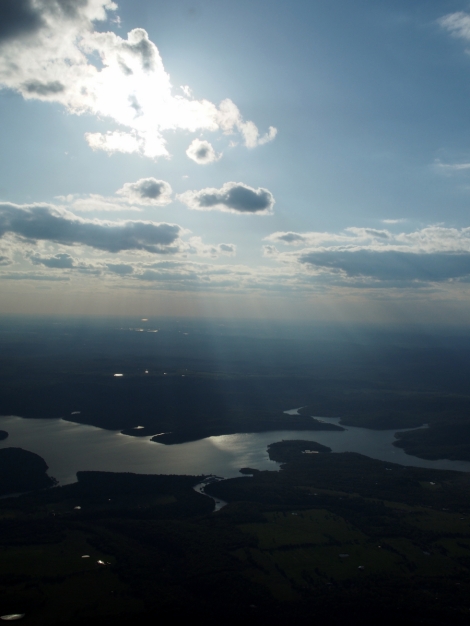 When the sky opens up over eastern Oklahoma, the late afternoon sun lights up an endless string of farm ponds like small round diamonds thrown carelessly across a deep green carpet. The green stretches from horizon to horizon, partitioned only by a lazy river winding its way south; a farmer looking down on this from above might be forgiven for thinking he’d died and gone to heaven.

Of course, three days ago, these fields were plowed with storms and record-breaking winds that were unusual even for the region’s epithet as “tornado alley”. But the storms have passed, and we’re enjoying the calm left in their wake.

The day didn’t start out quite so calm for us, either. When you last left your intrepid adventurers, Rich and I had just made it to Paducah, in western Kentucky and were enjoying the local hospitality while getting ready to ferry the new plane home. Our initial checkout with Jim had more than a couple of hiccups – first we couldn’t get a peep out of the intercom (Eldon from Midwest came out and swapped out components before discovering that Jim’s headset was shorting out), then I broke (actually broke) the autopilot. That was the plastic on a switch giving way, and the Brian pulled it into the hangar, found a replacement part and had us ready to go within the hour. But by the time we’d gotten ourselves both suitably checked out by Jim, paid up to Midwest and ready to say goodbye to Art and his remarkable team at Midwest (and his remarkable beard), our bluebird morning had turned into a solid glowering overcast.

We hemmed and hawed – both Rich and I were instrument current. There was clear air above (7000’) and below (3500’) the cloud deck, and while we wanted to be on top of it to cross the Ozarks, the weather to the west, where we were heading, was reported as scattered and clearing. But you never do want to be in a hurry, especially not in a new plane. We checked the weather, talked with Jim, checked the weather again and talked with Art. Sure, it looked fine. And it was. We spent the first hour on top, fighting 25-30 kt headwinds (would not have been fun in a slower plane) then ducked below, still at 5000’ as the weather cleared. Chatted the whole way with the amiable controllers Memphis Center and “Razorback” Approach. (Note to pilots: even though “Y’all” isn’t in the standard controller phraseology book, we weren’t going to argue with clearances like “Six Julie Alpha is cleared to Drake Field as filed, direct, climb 8000’, and let us know when y’all are ready to go.” – sure beats the alphabet soup routings and “stand by for amended clearances” where I usually fly).

Anyhow, a glorious flight. We stopped at Drake Field in western Arkansas for fuel and switched seats, arriving above the green, pastoral fields of Ada, OK in the early evening. More midwest hospitality: the airport was deserted, and we weren’t quite sure where to park, but I found a phone number on the side of the Tornado Alley Turbo building that said “For emergencies and after hours, call Tim Roehl, President, at XXX-XXX-XXXX”. Well, the main reason for stopping in Ada was to get some time in with the folks at TAT, who’d installed one of their turbo-normalizers on our new plane a few years back. So I called, apologizing profusely for interrupting Tim’s evening when he answered the phone. 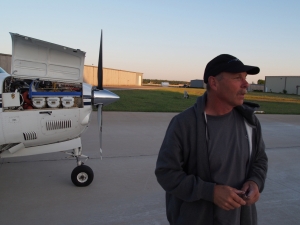 No, no problem at all, he said – we could just put the plane anywhere in front of their hangar. And where were we staying? Did we have transport? I told him we were just going to walk into town – about half a mile, and try one of the local editions of the Holiday Inn or whatever. No, no, no, he said – I’ll be there in five minutes with a car for you. He insisted. And by the time we’d towed 6JA up to the hangar, not only had he pulled up with a shiny new “loaner” pickup truck, but Dave from TAT’s maintenance team had rolled up in a golf cart taken a look under the hood and told us he’d like to keep the plane in his hangar overnight so the morning crew could tighten a few things and tweak a few others. We should just follow Tim, who would lead us to a good place to stay, get ourselves a good meal, and plan to show up tomorrow around 10 for some TAT ground school and flight orientation. Was there anything else we needed? Heh. No, we couldn’t imagine anything more – again, overwhelmed by midwest hospitality. 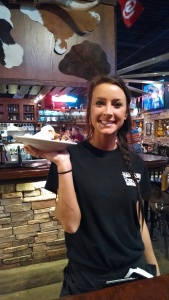 Evening was as is typical for this sort of trip: and entirely adequate hotel room (Holiday Inn Express) and a walk down the block for an entirely tasty and artery-clogging for us local meal at the “Santa Fe Cattle Company”. I swear, I’m going to need to eat nothing but celery and orange juice for the rest of this trip to recover. But where else are you going to try “deep fried bananas and cheesecake rolled in a pastry tortilla”? A la mode, of course. Ordered a beer, and debriefed the day’s flights with Rich while watching the local barfly clientele and flirting with the waitress (one of the few perks of being over 50 is that flirting with girls less than half your age is considered substantially less creepy).

Today’s plan is, well, to do whatever the fine folks at TAT want us to do. If they cut us loose before ~2:00, we’ll probably launch westward and see about making Albuquerque by nightfall (hi, Brent!). Otherwise? Well, there’s Amarillo, Tucumcari (sorry, Maggie, no chance to hit Tucson first) and other possible stops on the way. And we’ll take it from there.

One response to “Oklahoma!”