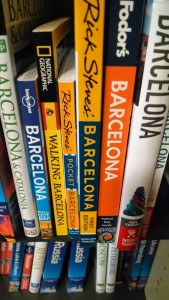 Ever since we started planning this trip – when was it? – coming up on a year ago, I couldn’t start thinking about the first leg of it without the old Hoyt Axton song kicking into my head as a soundtrack. Now, finally, we’re half an hour out of Barcelona, somewhere over the south of France, and it looks like we’re all going to probably survive at least getting to Spain without undue trauma. Of course, what happens once we step out of the airport and onto the Metro is anybody’s guess.

But aside from the ungodly length of the SFO->AMS flight (10.5 butt-numbing hours) and the impractical brevity of our connection in Amsterdam (our AMS->BCN flight was reported as “boarding” when we landed, and we still had to traverse the entire airport, including EU security), things went smoothly.That Miranda’s fruit salad and my belt ended up becoming gifts to the Schilpol Airport screening machines is a small price to pay for traversing the globe in such a rapid and miraculous conveyance.

Assuming we make it to our apartment in Passeig de Gracia unscathed, we’re going to catch our breath and probably pass out – it’ll be late afternoon in Barcelona and just about dawn back where we left our circadian rhythms. At some point we’ll pop open the guidebooks we brought and hastily dog-eared for various activities like “the funicular”, “las Ramblas”, “the maritime museum” and “anything that looks like it was designed by Gaudi.” But if I had to put money on it, my bet would be on that place a few blocks down in Eixample that the kids picked out. Something about “chocolate churros”, I think?

[Note: made it to apartment unscathed, and pleased to find that both belt and fruit made it through with us. One of our guidebooks, however, may be on its way back to San Francisco in the seatback pocket of of an outbound 747. But we’re in Spain. Barcelona, at that, and it feels like it, too!]