I have no right to make fun of bad English, especially in a country where I speak not a word of the regional language and only a handful in the national backup. But forgive me: some situations are just too ripe in entertainment possibilities to let slip.

This morning we found ourselves plugged in on the upper deck of the Barcelona City Tour Green Line, which is a red bus run by the Gray Line. And not to be confused with the Red Line (also, generally a red bus), also run by the Gray Line. Both of which are entirely different from the Red Line and Green Line belonging to Barcelona Bus Turistic, which also sports a Blue Line, all of which run in the opposite direction to those of the Gray Line busses, and some of whose busses may actually bear colors corresponding to the line they’re running. The whole thing has made getting to Sagrada Familia some sort of  “Traveling Salesman meets the Stroop Effect” problem. 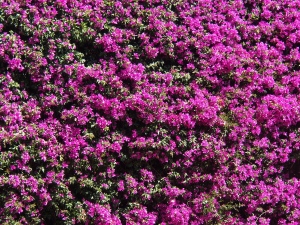 We eventually did make it, but not before following the tour the long way around through the modern (read: industrial) part of the city, accompanied by a narrative soundtrack that I can only hope was calculated for amusement along the lines of Monty Python’s Hungarian Phrasebook sketch. Okay, not that bad, but the recorded narration repeatedly emphasized the “architectonic” (“Yes,” confirmed Devon, “That’s what she said.”) significance of various buildings, including the Casino (“…which contains fruit machines and games of chance…”) and Jean Nouvel’s Agbar Tower (“…inspired by numbers, and the color ‘blue’…”). The City Park (“…containing many wooden foot pretties…”) was controversial because it required the eviction of many families, but now allows access to the disabled.

The narrator seemed justifiably proud of the Gaudi’s impact on the city, but equally so on the city’s (literal) impact on the artist: Somewhere between a quarter and half of all references to him seemed to be along the lines of “This is the street corner where he was run over by a tram”; later: “This building (also of architectonic significance) is the hospital where Gaudi was taken after being run over by a tram,” and of course, a significant feature of the Sagrada Familia is that it is where the great man was buried, two days after having died from the effects of being run over by a tram. Two stops later, they offer you the opportunity to disembark, if you wish, to take an actual tram, perhaps on the chance of encountering any of the remaining architects absentmindedly roaming the city.

We skipped the tram, but did spend close to an hour inside Sagrada Familia. My friend Robyn (“Hi, R!”) once convinced me that the best way to analyze any form of art is to first just sit back and ask yourself “So, how does this make you feel?” In the case of Gaudi’s towering collision between Modernism and the Winchester Mystery House, the only word I can bring to bear is “vertiginous”. It goes up and up in all sorts of crazy ways that make you feel like you’re going to church with Dr. Seuss. 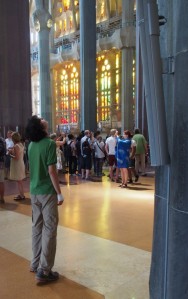 Except for the constant whine of radial saws cutting concrete and towering gantry cranes lifting enormous loads of stone far, far overhead (No, don’t even let yourself wonder What if…).  It’s crazy gorgeous, of course, as well as just gorgeous and just crazy; well worth the cost of admission. But once we made it out and back into the heat of the day, we were ready to just feed ourselves indiscriminatingly and ride non-stop back to the apartment for another siesta. Maybe, if it cools down enough in the evening, we’ll try riding the tram and go cruising for artists.