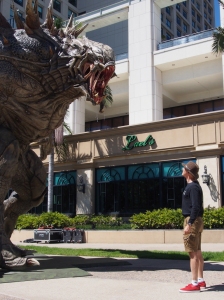 According to my logbook, it’s been almost nine years since I was last here. The typical turn of a phrase would be that I’d forgotten how much I liked San Diego, except that I haven’t. The city holds good memories for me and, as best as I can tell, is still home to the things that made those memories good.

We’re here – Jeremy, Devon and I – for Comic-Con. First time for any of us, and I get the sense that this is an undertaking like one’s first time to Burning Man, or New York, or Jerusalem, for some people. For me, it’s mostly a curiosity, to see what it’s all about. But for some folks, like the young lady at hotel check-in wearing the ponderous papier-mache dragon hat, it’s clearly a bit of a Hajj.

Now, the “Comic-Con” name is a bit misleading. As the source of all truth explains, Comic-Con is really a “multi-genre entertainment convention.” Sure, the folks who draw the Sunday morning strips will be here, but so will the folks who make the Avengers movies, science fiction TV shows, games and graphic novels of every stripe. Worse (or is that “better”?), the schedule is packed with crossovers in every conceivable permutation. Tomorrow there’s a “My Little Pony” tournament (what does that even mean?) and a two-hour Firefly Munchkin game. If the latter excites you as much as it does me, we’ve been spending way too much time together.

And the entire city has gotten into it: the local ball stadium has erected emergency traffic signs showing zombie apocalypse evacuation routes. Outside on the lawn, they’re even building a three-storey interactive exhibit that lets you see what it’s like inside Homer Simpson’s brain. I have to say, it’s impressive.

But tonight is “preview night”, when they give advance showings of pilot episodes for a bunch of new shows coming out this fall. All sorts of weird stuff, the most plausible of which is called iZombie, in which a med student accidently gets turned into a zombie, and has to drop out and get a job at the morgue to get her daily fix. You get the idea, right? (Please tell me you get the idea – I don’t want to try to describe the other, more bizarre shows being screened).

Anyhow. If you know our family, the obvious question is Wait – where’s Miranda? Wasn’t she the whole Comic-Con fanatic dragging everyone along? Heh, yeah. Funny story about that. She’s in Pennsylvania at a writer’s camp for young science fiction and fantasy writers. For whom Comic-Con is, almost by definition, Mecca. But it’s a writer’s camp organized by people who apparently aren’t very good at checking their calendars for scheduling conflicts. With things like, for example, Comic-Con.

So we’re here in her stead. More, as they say, as it happens.

[By the way: thanks, all for your kind words about Sara. I tend to work through my feelings by putting them into words, and that last post was very cathartic. It was wonderfully comforting to see how many people also shared those memories of what an amazing person she was.]

One response to “San Diego”