Blam, and the sky opens up on us again: a single bright crack of lightning, then visible sheets of rain, trees swept half over, like they’re holding to the earth for dear life. The percussion on the window feels like a Keith Moon drum solo, folded over itself a hundred times. Even the locals have stopped to look out at the storm. Fifteen minutes later, the sky is blue, and only the churning river of runoff covering the road betrays any sign of the storm’s passing.

Improbably, inevitably, things have sorted themselves out (mostly), on the logistics front: the team is “all go” for deployment. Whew. In the meantime, I’ve continued cramming what I can of the crazy union of nautical, scientific and Antarctic terminology and technology. With at least a couple of the systems, I now have a glimmering notion of how they work, and where to look if they stop doing so.

There are, of course half a dozen systems that remain complete mysteries to me, and undoubtedly others of whose existence I’m still unaware. But I’m getting the idea that I might actually be able to handle this. Yeah, yeah, intellectually, somewhere in the back of my rational mind, I was pretty sure I would be able to. The USAP IT guys do their homework, and Bill wouldn’t have let Scott hire me unless they were both convinced I could pick up the essentials on the way. Still, we know that the rational mind rarely has the deciding vote in things, and the reptilian part of my brain, the one that controls the whole “fight or flight” reflex has been voting the “run screaming” party line since Scott first gave me the call last year. It’s only the patient, diligent coaching of Joe, Valerie, Sean and Chris (thankyouthankyouthankyou Chris!) that has slowly coaxed my amygdala into admitting that, you know, I might actually do okay on the boat.

When I last wrote, I waxed poetic about catching up with my old friends from the program. I guess I should also note that I’ve been catching up with really old friends. No, not “old” as in “aged” – I’m not gonna go there – but as in folks whom I’ve known since I was 10. Some, like Brian, I’ve been in almost constant contact with since we met, camping out on each other’s floors in college, crossing paths at improbable places around the globe. Even occasionally pawning our kids off on him and his wife (who, ahem, I introduced him to). 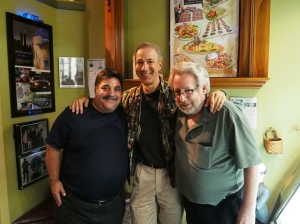 But who would have guessed that I’d still be talking with Charlotte, who introduced herself to me in 1978 by pouring a can of Doctor Pepper over my head on a dare from her debate partner? (To this day I have an aversion to the stuff). Or Rachel, with whom I started our school’s chess club in fourth grade? (No surprise that I’m still appallingly bad at chess) Or Perry Mittler and Larry Botnik, with whom I endured the agonies of Hebrew School and the inevitable agonies and embarrassments of Bar Mitzvah parties gone horribly wrong? Oh, how we’ve all changed, and it’s been wonderful sitting and laughing about how naive and, well, immature we were back then. But more than a little frightening to realize that we are now all the age our parents were – or older – when we first met.

The town has grown older, too. I spent dribs and drabs of spare time wandering through old haunts, trying to find places I remembered: Larimer Square, Southmoor Park, the old King Soopers (yes, for those of you not from Denver, that’s how they really spell it). When I was a kid here, we lived on the edge of town: a few blocks beyond our house, Monaco Ave. curved around and withered into a sidestreet; beyond it was nothing but grassland until you hit Castlerock, half an hour south. Now the sprawl continues non-stop, and it’s hard to tell when you’ve left one town for another until you get a little past Pueblo, more than halfway down the state.

The one thing that hasn’t changed is the mountains. I don’t know when I first sat outside and watched the sun setting behind that jagged wall of snow-covered peaks, but it still takes my breath away. Four years ago, prior to that first deployment, I took the spare day I had and drove west into the mountains on I-70. I found some place to stay that night in Breckenridge, and spent the next morning losing myself in the rambling trails above town, reveling in the scent of the pines and the watercolor hillsides of aspen trees in late autumn.

This time, I had to settle for a pint of the Breckenridge Brewing Company’s Vanilla Stout, looking west from the patio of some gastro-pub down the hill from my corporate lodgings. No, I’m not complaining, just reminiscing. And there are plenty of mountains in my future: I’ve only got two days at home to pack before heading south to Punta Arenas, smack dab in the middle of the Chilean part of Patagonia. Not that I’ll have time to explore the mountains there – certainly not before we set sail, but I’ll not be wanting for dramatic landscapes by any means.

More, as they say, as it happens!