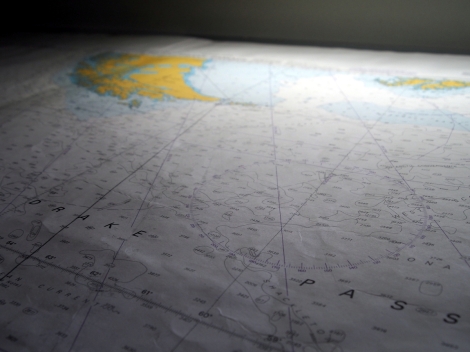 “So… when people get seasick – when does that start happening?”

“Oh, a bunch of folks are already horizontal. If you’re not feeling it yet, you’ll probably be fine.”

Kim’s reassurances aside, fifteen minutes later I was not at all fine. I’ll spare you the details, but the rest of the day was punctuated by numerous incidents of “excusemeIneedtoliedownRIGHTNOW” or less ceremonious, wordless scrambles down the hall. Ahem.

When I’m not lying very still (sometimes in improbable places) with my eyes closed, I’ve found I do best peering out from the bridge or in the aft control room. Captain seems to understand, and appreciates my resignation about why I’m there. He’s not a man of many words but he throws me a bone. “Yeah, you guys having to sit there below all day staring at an itty bitty screen – that would mess anyone up.” He prescribes getting up and moving around, at least once an hour, especially to get out in the wind and weather for fresh air, even if only for a minute. And it’s been working, to an extent.

Hanging out in aft control

When I do need to be sitting and can get away from my desk, I’ve been retreating to the aft control room. It’s a largish greenhouse overlooking the aft deck and ship’s main winches. If the bridge resembles something out of Star Trek, the aft control room comes closer to the TARDIS, or a 1990’s game controller run amok. But when we’re not running trawls off the a-frame winch in back or loading stuff in port, aft control seems to be a quiet place from which you can watch the world go by. Having a broad horizon to stare out at certainly helps with the seasickness, and when my stomach’s feeling settled, I can even manage to write a little, assuming I remember to do it in short bursts.

Some of the “controls” part of aft control

We’re one day into the Drake crossing, southbound for Admiralty Bay on a heading of 179 degrees, one shy of true south. And I’m lucky – it’s a “good crossing”, according to those who have done a few. Sitting snugly in aft control, watching rolling hills of black water break against the side and spill across the back deck, I can’t muster the curiosity to wonder what a bad crossing looks like from this vantage.

Speaking of which: if you’ll excuse me, I’ve got to go lie down Right Now.

[In the meantime, here are some more pictures] 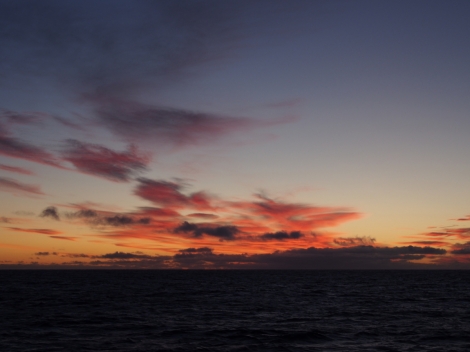 Sunrise from the 01 Deck 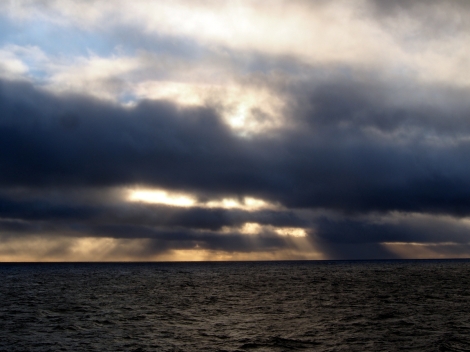 Nothing but open ocean ahead

Coming through some light showers, we get a lovely rainbow. Pot ‘o gold is directly off the bow.

One response to “When You Wallop ‘Round Cape Horn…”